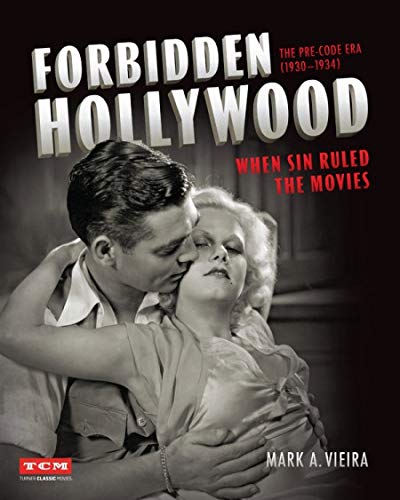 “a crackling history of the war between Hollywood and the moralists.”

In the early 1920s, Hollywood enthralled America, not with the bills of fare on screen but via the real life scandals involving some the movie world’s major players. Roscoe “Fatty” Arbuckle was tried three times and finally acquitted for manslaughter of a young actress-wannabe; still, his career was destroyed. Top director William Desmond Taylor was found murdered in his home. The skimpy negligee of teenage starlet Mary Miles Minter was discovered among Taylor’s intimate possessions. Handsome leading man Wallace Reid succumbed to morphine addiction. Rumors of wild sex parties and drug use in the film colony were rampant.

The unbridled hedonism made for salacious and gleeful copy in the newspapers. Self-appointed censors in government offices and church pulpits demanded Hollywood clean up its act lest it destroy morality throughout the nation. William Hays, the Postmaster General under President Warren Harding, was brought in as a sheriff to police the movies. Hays created “The Formula,” a list of do’s and don’ts to control what audiences saw on screen.

Even by 1920s standards, the rules were archaic. No profanity, no suggested nudity or sex (including married couples in the same bed), no miscegenation, drug use, sedition, implied homosexuality, and on and on. In the late 1920s, as sound films took hold, Catholic lay leaders and clergy helped The Hays Office further define what was and was not acceptable in the movies. The document that emerged from these collusions became known as The Hollywood Production Code, or The Code for short.

The result? Film producers largely ignored The Code. In 1930 the Great Depression was on. Americans, though strapped for cash, still wanted entertainment. Movies were the panacea from everyday strife. Hot stuff made for good box office.

Mark A. Vieira’s new book Forbidden Hollywood: The Pre-Code Era (1930–1934) When Sin Ruled the Movies is a crackling history of the war between Hollywood and the moralists. Vieira focuses on specific genres, concentrating the work on flashpoint stars and films. Some are obvious figures, like Mae West who openly flaunted her sexuality in manners large and small through suggestive eye rolls and sizzling bon mots (“Goodness, what diamonds!” “Goodness had nothing to do with it.”)

The stunning violence of gangster films, including Little Caesar (1931) and Scarface (1932) were vilified as glorification of organized crime. One critic of the genre declared: “Those gang pictures—that’s terrible kid stuff. They're doing nothing but harm the younger element of the country. I don't blame the censors for trying to bar them.” The offended party? No less than the original Scarface himself, Al Capone.

Viewed through a modern lens, some of the reasons declaring these films as “offensive” are patently ridiculous. The 1932 film The Island of Lost Souls, adapted from the H. G. Wells novel The Island of Dr. Moreau, was pilloried for encouraging bestiality.

The forgettable low-budget comedy So This is Africa, featuring the comedy team of Wheeler and Woolsey, was attacked for promoting too much sexual innuendo through its caricatures of a beautiful lady explorer, a tribe of gorgeous Amazon women, a gorilla of unknown gender, dialogue filled with double entendres, and the ultimate appearance of the two stars wearing women’s clothing as they join the Amazons. However white actors in the film wearing blackface to play “jungle natives” didn’t raise an eyebrow.

On the other hand, modern viewers might be astonished by some of the radical elements found in films of the 1930–1934 timespan. The Warner Brothers musical Wonder Bar (1934), the story of a love triangle between Al Jolson and a dance team of Ricardo Cortez and Delores Del Rio, raised the censors’ ire over a ballroom dancing sequence.

One internal memo at the Hays Office read: “Into the scene comes an effeminate-looking youth who taps the dancing man on the shoulder and asks, ‘May I cut in?’ whereupon the man dancing with the girl smiles, leaves her, and the two men dance off together.” (Check out the YouTube clip Wonder Bar “Boys Will Be Boys.”) The blatant S&M imagery ripping throughout the Josef von Sternberg-Marlene Dietrich classic The Scarlet Empress (1934) still retains its power to shock some 85 years after the film’s initial release.

Joseph Breen, the head censor of the Motion Picture Produces and Distributors of America (today the Motion Picture Association of American, or MPAA), pulled no punches in finding blame for Hollywood’s onslaught upon national decency. Jewish producers, he declared, were attempting to poison the country’s sanctified Christian values. In a letter to one colleague Breen wrote, “These Jews seem to think of nothing but money making and sexual indulgence.” In June of 1934, the crackdown came. Breen marshalled his troops, coming up with an amended production code. Producers who defied it could be fined and hounded out of the business.

Hollywood bigwigs got the message. Overt sexuality, violence along the lines of Scarface, or any other to-be-determined transgressions were forbidden. Self-imposed studio restrictions were the order of the day. The Code lasted another three decades. It took films like Bonnie and Clyde (1967) to break the stranglehold on what was and was not acceptable in the movies, as per the official censors.