Food Whore: A Novel of Dining and Deceit 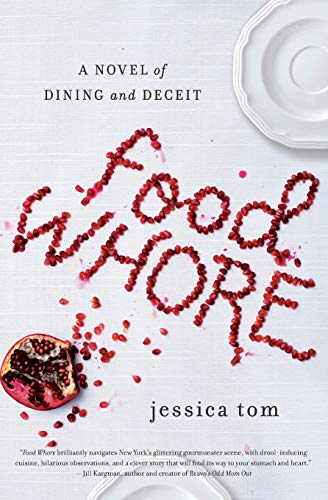 Among the many different cultural subsets in New York City, there is a group of food elitists. “Foodies” is too common, too inclusive, too 99% of a term to use to describe the subset of people living in New York for whom where you eat is as important a calling card as what you wear or for whom you work. In a city full of strivers, the food elitists are a cut above the average diner. They know about the latest restaurant openings, the hottest chefs, and the coolest dishes to order. To them, food is a fashion statement.

Many of them are quite young and seem impervious to the amount of cash flow (or credit card debt) required to keep up with their fellow elitists. Drill down even further and you will find among them those who also want to have an impact on the New York food scene, be it as a writer, a chef, or a restaurateur. These are the young food elitists like Tia Monroe, the protagonist in Food Whore, whose ambitions are as voracious as her appetites.

Let’s call Food Whore, the debut novel by Jessica Tom, Food Lit. Like its cousin Chick Lit, it is fast-paced, glossy, and includes some steamy sex scenes thrown in for good measure. But it is also food centric—or to be more exact, it centers around high end, cutting edge food of the sort food elitists would approve.

Tia Monroe, a freshly minted graduate of Yale, arrives in New York with her college boyfriend in tow to begin a graduate program in food studies at New York University. Her initial ambition is to score an internship with the well-known food writer and cookbook author, Helen Lansky (Ruth Reichl will immediately come to mind), but her plans are thwarted by the conniving New York Times restaurant critic, Michael Saltz, who sizes her up as just the tasting protégé he is looking for to offer him cover after losing his own sense of taste.

Without her knowledge, Michael Saltz—who meets her the night of a food studies meet and greet at which Helen Lansky is to appear—resubmits her internship application so that she is assigned to work the coat check at Madison Park Tavern, a four-star restaurant.

Tia is devastated but on her very first night at the restaurant she is reassigned as a backserver and ends up clearing plates for none other than Michael Saltz and his party. He signals to her that he wants to talk with her and discreetly follows her down to the basement where he grills her on all the dishes he has eaten while furiously taking notes. Eureka, his instincts were spot on. Tia Monroe, the twenty-two year old who has never dined in a four-star restaurant in her life, is a tasting prodigy with the food vocabulary of a seasoned critic.

Michael Saltz asks her about the amuse-bouche he was served (at this point Tia does not know he has lost his sense of taste and is hesitant to give her opinion). “I think your amuse-bouche . . .” she begins haltingly until she kicks into high gear:

“I finally met his eyes and saw he was genuinely interested. I could tell him a little bit. Talking about food was the thing that made me me. What made me shine.”

‘The edamame puree with clementines and endives is genius. It’s bright and bitter, soulful and singing. It’s a summer dish with autumn actors.’

Saltz, a kind of caricature of a powerful food critic, is duly impressed and subsequently seduces her (figuratively because of course he is gay) with an opportunity to be his incognito dining companion to describe what he can no longer taste so that he can stay at his job. He sweetens the offer with unlimited access to his personal shopper at New York’s elite department store, Bergdorf Goodman, so she can dress the part (Ms. Tom loves to write about fashion as much as she loves to write about food).

And so begins the almost instantaneous transformation of Tia Monroe from a wholesome graduate student with no fashion sense and a nerdy boyfriend to a callow but glamorous clandestine restaurant critic for the New York Times whose opinion now determines the fate of every important restaurant in New York.

What unfolds over the course of roughly three months is a cautionary tale of a young woman who is given more power than she is ready to handle and is in for a big smackdown. Given its wholly implausible storyline, this could have been a hilarious send-up of the world of high end dining in New York, except it isn’t a send-up. It isn’t even arch. There may be some funny moments, but they were not written intentionally.

Still, there are signs of authenticity in this work. The scene toward the end of the book when Tia returns to her family home in Yonkers for Thanksgiving felt real and hopeful. But with too many lines from Tia like “Only three four-star restaurants remained. I had changed the character of New York, not once, but twice.” the overall feel of the book seems overwrought.

Maybe Food Whore will mark the start of a new genre called Food Lit. But if so, let’s just hope it includes books that are genuinely funny.