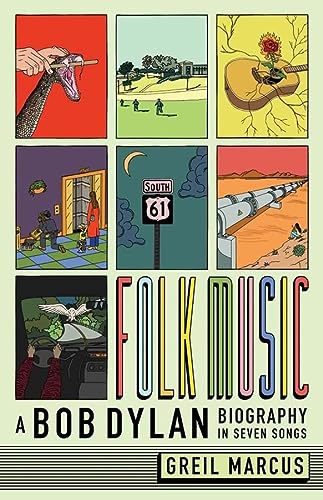 Folk Music is not a conventional biography, and readers hoping to find in it details of Bob Dylan’s personal life will have to search elsewhere. Making clear the territory he will cover, Marcus quotes Dylan: “I write songs. I play on stage, and I make records. That’s it. The rest is not anybody’s business.”

Marcus’ purpose in writing Folk Music is to embed Dylan in a long tradition of American folk music, to show how Dylan discovered the tradition, used the tradition to create both his songs and his musical style, and brought the tradition into the modern era by connecting it to contemporary social and political concerns. Dylan was a singer, a troubadour, and a performer who found the spirit of folk music—a music that reminds people of their common humanity—and applied it to the life we all have been living here in the good old U.S.A.

Marcus’s admiration for Dylan is unqualified. He writes, “It would be a mistake to assume there’s any road on that [folk] map that Bob Dylan, as a historian, as a listener and scholar, a folk man, doesn’t know.”

Marcus traces Dylan’s evolution as a folk artist through extensive analysis of seven iconic songs that Dylan, wrote, performed, and recorded over the course of his 60-year career. We learn the origins of these songs, their numerous variations, their connections not only to other songs and other artists, but also to historical events and our social fabric. In elaborating Dylan’s musical journey Marcus puts on display a vast knowledge of America’s popular culture and a sardonic recognition of the flaws in our national character—flaws such as racial injustice and wealth inequality that folk music tries to address. The book is fast-paced, like a song, and hip.

But not always easy reading. Marcus writes in a challenging style that can be difficult to navigate. He is fond of long, rambling sentences that run on, desperately seeking a subject, and leaving the reader lost in a thicket of clauses, phrases, and parenthetical asides. Here is a sample from page 35:

“As the year went on he played harmonica with performers as disparate as the foot-pounding blues guitarist John Lee Hooker; the blues singers Victoria Spivey and Big Joe Williams, who had first recorded in the twenties; for his album ‘The Midnight Special,’ Harry Belafonte, whose songs Dylan played in Dinkytown before he discovered Woody Guthrie, in 1961 as much a star as anyone on stage; and the Texas folk singer and, in Dylan’s words, in 2004, in his ‘Chronicles, Volume One,’ ‘double-barrel beautiful’ Carolyn Hester, for her first album on Columbia, the biggest and most respected record label in the country, which did not record scruffy-looking boys-of-the-road folk singers, but did record women who, like Aretha Franklin, on the label at the time and lost in a mainstream makeover, might have a nightclub career in their future.”

The pattern of this sentence is very much the pattern of the book. Throughout his narrative, Marcus free associates from his store of musical knowledge, improvising on his theme like a guitarist riffing on a melody. The result can be dazzling, if not a bit exhibitionistic, and calls into question whether the book is more about its author than its ostensible subject.

But toward the end of the book, discussing the songs “Jim Jones” and “Murder Most Foul,” Marcus comes back to Earth and puts Dylan and his significance into clear focus. “He never forgot the old songs, but he gave them new lives to live, and the old songs were so rich in melody and paradox that like the souls of the dead seeking new bodies they could, in new hands, live forever.” He closes on an elegiac note punctuated with love.  “What will go out of the world with him?”