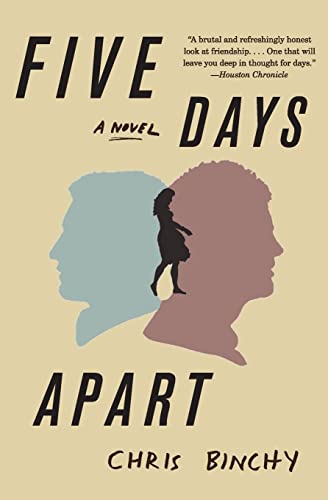 Five Days Apart succeeds for many reasons, not the least of which is the author’s spot-on evocation of a specific time and place: Dublin, Ireland, in the nineties. David, the first-person narrator, recently graduated from college with a degree in mathematics and is ready to take advantage of Ireland’s new prosperity, while his lifelong best mate, Alex, still in his final year, can’t quite decide if he even wants to finish college given his poor performance on the exams, or go off and become a filmmaker.

Alex is from a well-off family, but is unlikely to add to the family fortune. He is feckless and undisciplined. There are many projects that he begins well and then loses interest in and abandons. This pattern extends to every aspect of his life, including his relationships with women. He falls deeply in love with a succession of them, proclaiming each the love of his life, but he stays with none of them.

The characters appear at first glance to be downright stereotypes.  The narrator is an intellectual who has the devil’s own time chatting up women, even those who seem to be interested in him, such as Camille, a girl he meets at a party and with whom he simply cannot work up the nerve to start a conversation.  The problem is, he thinks too much.  Quite frankly, for all his smarts, where girls are concerned David is a nebbish.

Alex, however, doesn’t have the same problem.  He doesn’t mind looking like an idiot as long as it works.  David observes:

“It seemed like it should be a simple thing, the ability to meet somebody and say something normal.  To smile and be friendly and maybe even funny.  I saw it in Alex from when I met him first.  He was fluent, and it didn’t seem to cost him a thought.”

That last line has to be one of the most apropos in the book.

David enlists Alex’s help in approaching Camille, and perhaps even putting in a good word, but his friend completely misunderstands the situation and ends up coming on to her himself, edging out David without giving it a thought.

“It was as if I was being taunted by circumstance, as if I was being shown that however much I thought I wanted her, there was room for more.  My desire could still be ratcheted up.  This is what happened to people who wouldn’t move quickly and say what they wanted.  It was how fate showed the indecisive the damage they were inflicting on themselves. . . .”

The theme of any book is going to be trite, it can’t be helped. What lifts it out of mundanity is the way it’s treated by the author: the form, the language, the intellectual and emotional underpinnings, the texture and detail of the mise en scene, and the uniqueness of the otherwise stereotypical characters that make us want to like them.  And we do like them, even the charming bounder Alex.

The narrative voice is intimate—excruciatingly so.  It whispers in your ear.  It gets under your skin and before you know it, you are living David’s his life with him.   He describes his dilemma regarding women in words that are as lyrical as a T. S. Eliot poem.

“How many others? Beautiful girls or girls that only I seemed to notice.  Girls who nearly and almost and might just have, but never did.  I never said.  I never stopped and asked or told. It might have worked out if I had.  I could have been transformed.”

We have all been there.  David is in a sense representative of everyone who has been hamstrung by his own internal monologues, fears of possible antagonists leaping from imagined shadows, haunted by “what-ifs.  That’s what makes David’s narration so personal. It is our lives we see in the hapless David.  It would be tragic if it weren’t so blasted funny.

In other aspects of his life, quite apart from his failure with Camille, he is far more successful than Alex.  He lands a steady job that suits his risk-averse temperament, and he’s happy to have it  This passage reflects with ironic humor  the way he defines  his situation and, not coincidentally, that of “the new Ireland:”

“I felt the joy of the suit.  It made me one of a group.  An office boy.  A date monkey.  Nothing to distinguish me from anybody else with an ID on a chain around my neck.  I saw my tie on other guys every day, people I have had something in common with to choose the same thing.  A shade away from absolute conformity . . . this new part of town that could be anywhere, with all the languages and the gyms and the coffee cups and juice bars, international short-hand for nowhere.”

And this is one of the Binchy’s minor themes.  These young people are caught between the traditional Ireland with its folklore and its love of words, and the new, more cosmopolitan Ireland, the Americanized Ireland.

Even as Alex rises in the corporate world, enjoying a successful life as a worker-bee, Alex and Camille are not so content.  Alex is impossibly centerless, and Camille is tired of his free-wheeling attitude.  He’s just too much of a lad for her.  She wants more.  Their relationship is on-again, off-again, and it is during an off moment, with David completely misunderstanding the situation, that they make a huge mistake that threatens to end their friendships entirely. They sleep together.  It is a betrayal that Alex will not soon forget, and since Camille is not ready to cut him loose, David is the odd man out.

David throws himself into his work.  New business opportunities mean he learns to take more risks—at least professionally—and as a result is rewarded with even better opportunities. He is really quite flush.  He tries to get away, vacationing in Brazil, hoping to flush his mind of Camille.  It doesn’t work.   No matter what he accomplishes, he thinks of everything in terms of how it would impress her.

The thing about these love triangles, though, is, they are incredibly dynamic and while relationships might be redefined, they are never really ended.  These three people do genuinely love each other and so are willing to put up with, even revel in the complexity, the heartache, the frustration, the frank betrayal, and the joy.  Chris Binchy has taken what might have been boilerplate and turned it into an honest and compelling portrait of contemporary friendship.