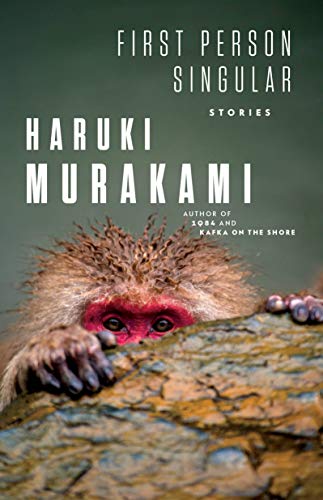 “What is made clear in this latest collection of stories is that Murakami is a master storyteller.”

Haruki Murakami is an author of 14 novels, nonfiction works, and numerous essays. First Person Singular is his fifth short story collection. Born in Koyoto, Japan, in 1949 he now lives in Tokyo. Murakami’s work has been translated into 50 languages, and his books have sold in the millions. He has won multiple international literary awards and prizes. He is most often identified as a magical realist, but that description is too confining and somewhat misleading. What is made clear in this latest collection of stories is that Murakami is a master storyteller.

First Person Singular is a collection of eight short stories, and, to be sure there are elements of magical realism in several of them. “Confessions of a Shinagawa Monkey” is one such story. The narrator is in a hot springs bath when the monkey enters and begins to speak to him. After considerable conversation and revelations, the two, man and monkey, adjourn to the man’s room for beer and snacks. The confession, when it comes, reveals a fascinating practice by the monkey who steals the names of women to satisfy his sexual desire for them.

If there is a theme in this collection, it may be memory, how and why it works, and how little humans seem to control their memories which come and go without explanation. Why does a memory from many years past suddenly pop into consciousness? Does it have a purpose? Or is it one of those unsolvable mysteries of life? The story that explores memory most deeply is “With the Beatles” in which the album of that name provides the entry point to the story.

Several stories feature shards of memory carried by the narrator that come back to him without prompting, and often quite vividly, floating into his consciousness seemingly out of nowhere. One of these involves a woman with whom the narrator has a one-night stand in which the woman tells him she will shout another man’s name at the point of orgasm. The following morning, she recites some of her poetry to him. These are called Tanka poems, an ancient Japanese form dating from the seventh century. A week later, she sends a self-published collection of her poetry to him. He does not know her name and never sees her again. Death and decapitation are prominent in the poems.

Death and suicide are subthemes in Murakami’s stories although for the most part the stories in this collection are not depressing, and some provoke laughter. A love of music, especially classical and jazz, and a love of baseball are major features in some of the stories.

In “Carnaval,” beauty and ugliness are explored at several levels in a relationship centered solely on an obsession that two people share over Robert Schumann’s Carnaval. In the title story, “First Person Singular,” a man sitting alone in a bar is accosted by a woman for some wrong that he has done to another woman in his past. He has no recollection of the incident or the wronged woman. Again, memory is central.

Murakami deals with all of these issues in simple and almost delicate language with no particular explanation of memory, only a kind of wonder about it. He deals with very human moments and emotions and dwells within them, as they dwell within his characters. There are both moving and puzzling stories that at times are laced with humor. The notion that the Shinagawa Monkey loves Bruckner with a focus on the “Seventh Symphony” and the third movement seems both humorous and touching, or the idea of Charlie Parker playing Bossa Nova seems both absurd and totally plausible as Murakami presents it.

Some will find these strange juxtapositions too much to deal with. Others will be irritated by the lack of resolution and the open-ended qualities of many of the stories. Ultimately, what Murakami produces is a world that features the odd, the unexpected, the incomprehensible, and the often troubled and emotional landscape through which humans travel across time.

In his novel, Kafka on the Shore, Murakami quotes Tolstoy:  “Happiness is an allegory, unhappiness a story.” In First Person Singular, there are eight beautifully crafted stories.