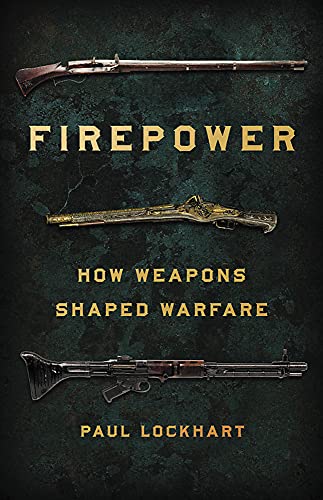 “For readers interested in how the development of weapons really affected warfare at the tactical and operational level, this is a highly readable volume that combines technical details with tactical analysis to provide a unique perspective . . .”

The relationship between weapons and warfare has been a perennial subject for military historians, and the debate over how the advancement of weapons technology drove concurrent changes to waging warfare remains a hotly debated topic.

In this book, the author offers his own perspective by going down to the tactical level instead of examining broad sweeping trends to warfare examined by such notable historians as Jeremy Black or Max Boot. The detailed discussions on seemingly mundane topics such as the development of smokeless powder and the race to develop better infantry weapons make this a unique examination of the eternal topic of how firepower changes the means and methods of waging war.

Beginning with the early days of gunpowder weapons in the mid-16th century, the author goes through very deliberate examination of how these cumbersome and often unreliable weapons quickly began to dominate European battlefields. As the author notes, these early guns were not decisive in themselves, but provided the means to extend the battlefield and provide another tool for strategists to use when trying to achieve what would become firepower dominance on the battlefield.

In addition, the author also makes a detailed examination of how these increasingly complicated and expensive weapons could not become widely adopted without the growing scientific and industrial capabilities of developing monarchies to produce and maintain large numbers of gunpowder weapons as well as train growing numbers of professional soldiers that constantly practiced the complicated battlefield maneuvers needed to maximize the potential capabilities of these new weapons. The simultaneous development of artillery also changed the military landscape as massive castles and other fortifications quickly became obsolete under the bombardment of more reliable and lethal artillery.

The book follows this same basic theme, tracing the military, economic, and scientific development of weapons, including the adoption of gunpowder weapons on naval vessels, which changed the nature of naval warfare as heavy guns began to play a decisive role in the development of large and expensive sailing ships able to carry dozens of heavy cannons to conduct massive broadside naval actions. The increasing expense and technical capability required to produce these weapons, particularly in the late 18th and early 19th centuries, quickly creates a military disparity between Europe and the rest of the world as the rapid expansion of the Industrial Revolution leaves much of the world militarily behind.

The late 19th and early 20th century saw some of the most significant developments in firepower for ground combat, and the author provides a fascinating look at the “rifle” arms race between the major European powers. This may seem quant to modern gun owners, but the race to develop reliable magazine-fed weapons using center-fire brass cartridges using smokeless powder was a significant area of both military and technological competition in Europe, particularly among France and Germany between the Franco-Prussian War and the outbreak of World War I. Combined with the development of the first reliable and somewhat portable machine gun, the carnage of World War I becomes more understandable from the perspective of infantry weapons. At sea, the transition from wood and sail to steel and steam also sets off another arms race to build bigger ships carrying more heavy guns, taxing the economies of the major world powers as another arms race at sea occurs prior to World War I.

The creation of the tank and airplane introduces another element in the contest between firepower and maneuver, as all the European powers try to ensure the stalemate of the World War 1 Western Front is not repeated. Here the role of economic, industrial, and technical capability becomes more than equal to the purely military use of these weapons, as the more complex weapons introduce their own heavy logistical and technical requirements to equip and maintain these more complex weapons on the battlefield. This was even more true of naval combat during World War II, when the aircraft carrier and submarine began to replace big gun ships as the most decisive naval weapons, relegating battleships to shore bombardment for amphibious landings.

For readers interested in how the development of weapons really affected warfare at the tactical and operational level, this is a highly readable volume that combines technical details with tactical analysis to provide a unique perspective on this topic.