Fire and Rain: Nixon, Kissinger, and the Wars in Southeast Asia 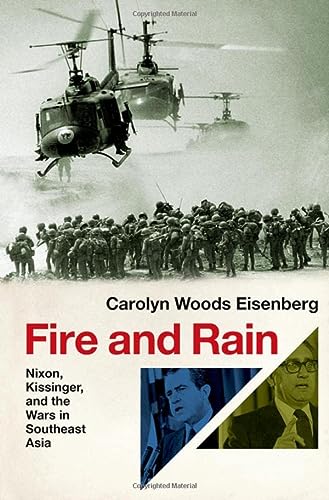 “Fire and Rain pretends to be military and diplomatic history—and there is some of that—but is mostly an anti-Vietnam War, anti-Nixon and Kissinger screed . . .”

Leftist illusions die hard. Carolyn Woods Eisenberg is a leftist historian at Hofstra University, whose previous book blamed the United States for starting the Cold War with the Soviet Union. Her new book Fire and Rain reads like the phony “war crimes” indictments of Richard Nixon and Henry Kissinger that so inspired the old anti-Vietnam War left. For “historians” like Eisenberg, Vietnam is the scar that can never be erased from America (or should it be spelled “Amerika”)?

Eisenberg’s ideological bias is evident in the book’s acknowledgments section, where she mentions people who played a “vital role” in her book project: anti-Nixon professor Stanley Kutler, antiwar activist Tom Hayden, and “leftist, feminist, antiwar historian” (New York Times’ description) Marilyn Young. She lauds the staff of the communist-led Vietnam-USA Friendship Society (which was established by communist leader Ho Chi Minh in 1945), which facilitated her travels to and in Vietnam for the book.

Fire and Rain pretends to be military and diplomatic history—and there is some of that in the book—but is mostly an anti-Vietnam War, anti-Nixon and Kissinger screed that portrays Nixon, Kissinger, and America’s South Vietnamese ally as evil and the North Vietnamese and Viet Cong as “patriots seeking the reunification of their country, which had been divided by outside fiat and was being ruled in the southern half by a corrupt dictatorship.”

Eisenberg ridicules the notion that the United States fought in Southeast Asia to prevent the countries of the region from falling under communist rule. Fears of communist expansion, she claims, were “exaggerated.” Although she acknowledges that our involvement in the region started in the Truman administration and was continued to varying degrees by Eisenhower, Kennedy, and Johnson, Nixon and Kissinger get most of the blame for dealing with a “futile” war they inherited.

Eisenberg appears to have no complaints about the communists—in her view, they didn’t start the Cold War; we did. They weren’t at fault in Vietnam; we were. Their negotiating positions to end the war were “sensible,” while ours were impractical or non-starters. And of course she is entitled to her opinion on these matters, but don’t call it history.

For Eisenberg, the Tet Offensive of 1968 was a turning point when the “escalating American involvement in Southeast Asia was less a demonstration of strength than a sign to much of the world of American weakness and cruelty.” Alas, this “military historian” is perhaps unfamiliar with the observation of Union Gen. William T. Sherman that “war is cruelty, you cannot refine it.” But contrary to her view of Tet (and that of Walter Cronkite of CBS News), it was not a U.S. defeat, but a devastating setback for the Viet Cong and North Vietnamese forces.

North Vietnamese intransigence was not to blame for prolonging the war, she writes, instead Nixon and Kissinger “prolonged the war . . . because it served their own needs and met other institutional requirements.” They were “unwilling to stop a futile war,” she writes, because of their “character and outlook,” meaning to buttress their “hawkish credentials.” Nixon, after all, made his national reputation as the anti-communist who exposed Alger Hiss as a communist, though Eisenberg doesn’t say if she believes Hiss was innocent or guilty.

The author dismisses the concept of credibility in international politics. Maintaining U.S. credibility, she argues, was a cover for the warmongers in Washington to unleash their cruel bombs on the citizens of Vietnam, Laos, and Cambodia. Like the anti-war activists of the 1960s and early 1970s, it is clear that she loathes the U.S. military, especially the military hierarchy. But mostly, she loathes Nixon and Kissinger.

The heroes of her book are the anti-war activists and officials within the administration who opposed the war, but certainly not the brave soldiers, sailors, and airmen who fought for the United States. The only favorable mention of American soldiers are of the John Kerry types who served in combat then protested the war at home. American atrocities are highlighted throughout the book. The destruction caused by American bombing is condemned.

What Eisenberg calls American “acts of criminality” take center stage. She lauds American visitors to North Vietnam who condemned American bombings—Joan Baez, Teleford Taylor, Rev. Michael Allen and others—and who were used as propaganda tools for our enemies. We read about the horrors of South Vietnamese prisons, and we read about the “hawkish” Admiral John McCain but nothing about the torture and brutal treatment of Admiral McCain’s son and namesake and other American POWs by the communists.

Eisenberg makes light of the value of Nixon’s triangular diplomacy with China and the Soviet Union—a diplomacy that set the stage for the end of the Cold War and the downfall of communism in Russia and Eastern Europe. In her worldview, Nixon and Kissinger only had selfish and mostly evil designs. Instead of tough, smart, shrewd geopolitical practitioners who used war and diplomacy in the cause of seeking global stability, Nixon and Kissinger are portrayed as amoral statesmen concerned more about their own power and political survival than the interests of their country.

Alas, there is no mention in this history book about what happened after the communists took power in all of Vietnam, Laos, and Cambodia. The savagery of communism in power is notably missing. This is not a book that in the unforgettable words of Jeane Kirkpatrick “blames America first.” It blames America—Nixon and Kissinger’s America—for everything.

To be sure, there are reasonable arguments to be made that the United States should never have gotten so deeply involved in Southeast Asia. Such arguments were made at the time by Hans Morgenthau, George Kennan, and other foreign policy realists—not based on the supposed immorality of America’s leaders and fighting men, but on hardheaded geopolitics. That is not, however, what Eisenberg offers in this book.

And there are reasonable criticisms of the fragility of the Paris accords that the communists violated soon after they were signed. Eisenberg accepts the “decent interval” version of the story which claims that for Nixon and Kissinger the peace accords were a “cover for the United States to exit the conflict” without ensuring the survival of the South Vietnamese government. But Nixon pledged to use U.S. air power and military assistance to prevent a communist takeover should the North break the agreement. Congress subsequently made that impossible.

And while Nixon and Kissinger were not saints, in this brutal world saints have no place at the head of the U.S. government. Global politics have nothing to do with the Sermon on the Mount. It’s all about power, interests, and, yes, credibility—especially if you are a great power with global interests. War is horrible, but as Gen. Alexander Haig once remarked: “There are things worse than war.” The “peace” that the communists brought to Southeast Asia after a Democratic congress cut of all aid to our longtime allies was the peace of the grave. And most, though not all, of the anti-war activists remained silent about this.

Readers who want to know about the origins of the Vietnam War, its evolution, and its outcome would do better to read Norman Podhoretz’s Why We Were In Vietnam, Guenter Lewy’s America in Vietnam, Richard Nixon’s No More Vietnams, and Henry Kissinger’s memoirs. Leave Eisenberg’s book on the shelves.