Fire and Rain: The Beatles, Simon and Garfunkel, James Taylor, CSNY, and the Lost Story of 1970 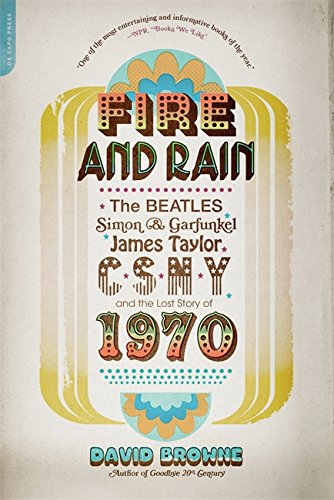 “David’s Browne book does a nice job of tying The Beatles, James Taylor, CSNY, and Simon and Garfunkel together: who played on which album, who was friends with who, and so on. He also includes some great cameos . . .”

Everybody was Kung Fu fighting . . .

Okay, not really. But it seems like the four bands the author chose to talk about in this book spent as much time fighting with each other as making music together. In this case, big drama equaled great songs.

David’s Browne book does a nice job of tying The Beatles, James Taylor, CSNY, and Simon and Garfunkel together: who played on which album, who was friends with who, and so on. He also includes some great cameos from Jimi Hendrix, Eric Clapton, Carol King, and Jerry Garcia. David Browne dug up some great stories about four monster bands and their music.

Nonetheless, most of The Beatles information seemed a little “been there done that.” They probably did not even need to be included in this book, especially since (barring Stephen Stills) they were the only British act in this group, and they had basically broken up by 1970.

The year of our Lord, 1970, was a banner year for the music biz in many ways. Four of the most popular and memorable albums were released in said year, and the musicians involved in them were almost freakily intertwined. Think six degrees of separation, but on crack (literally). Let us take a look at the roster of albums, shall we?

Everyone knows that The Beatles released their “last” album, Let it Be, in 1970, and most folks know the drama behind the album. But not many know that James Taylor got his start on The Beatles’ Apple Records. Taylor’s second, now Beatle-free album, Sweet Baby James, also hit stores in 1970. Crosby, Stills, Nash, and Young somehow managed to stay together long enough to make Déjà Vu and it went up the charts against these albums along with the titanic Bridge Over Troubled Water from the affable pair Simon and Garfunkel. There were probably other artists that struggled to get radio airplay during this year of hits, but for these four bands, it was almost like they could do no wrong.

But unfortunately, just like the contagious success, strife seemed destined to spread as well. CSNY almost broke up in the middle of their tour. The Beatles breakup is a well-documented part of rock and roll history. And with all the movies Art Garfunkel was shooting, he and long-time collaborator Paul Simon found it impossible not to go their separate ways.

James Taylor was pretty laid back, but he probably would have found someone to fight with if he had not been spending so much time fighting to get out of his own head and trying to stay away from the hard drugs that were so tempting and available to anyone in the music business who wanted to experiment.

Most people know at least one song from one of these albums—“Our House,” “Teach Your Children,” “Let it Be,” “Cecilia,” “The Only Living Boy in New York,” and the titular song for the book Fire and Rain. These are some pretty catchy tunes that have stayed popular for over forty years. Imagine how much more music we would have if these bands had somehow managed to last as long.

Thank you, David Browne, for playing the Kevin Bacon game with four great bands—but it still would have been better with Kung Fu fighting. . . .