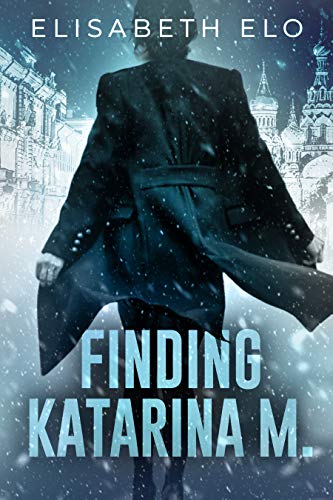 “Readers can relax and enjoy a fast-moving romp through the shadows of Siberia in Finding Katarina M., learning about an area of the world that is strange, enticing, and also forbidding.”

In Finding Katarina M., Elisabeth Elo’s second thriller, the protagonist, Natalie Marsh, is a workaholic doctor in Washington, D.C. She barely has time to visit her mother, an invalid suffering from MS, then she has an unexpected visitor from her mother’s past. A young dancer, Saldana Tarasova, visiting from Russia, tells her that her grandmother is alive. Katarina Melnikov and her husband were sent to Stalin’s Siberian gulags in 1949. The family believed they died.

After Natalie discourages her young relative from illegally overstaying her visa, the girl is found dead in her NYC hotel room. Saldana’s death is followed by unexplained contacts from police and CIA. Natalie receives an invitation to visit her Siberian relatives. Natalie’s mother urges her to go: “It all goes by so fast, sweetheart. You’ll be where I am sooner than you think. I want you to take this trip, okay? Not just because it will mean a lot to me, but because it will mean something to you, too. You’ll get away, far away!—and when you come back, you’ll have a perspective you don’t have now. You need that so you can move forward in your life.”

When Natalie finally agrees to the trip for her mother’s sake, she is plunged into an adventure. A friendly woman who turns out to be CIA, the disappearance of Saldana’s brother and mother, and an abandoned gulag site that is radioactive raise suspicions. As the danger mounts, a murder sends Natalie into hiding with Siberian nomads and finally into a Russian woman’s prison.

By the time she finally meets Katarina and learns the secret of her escape, Natalie has had a harrowing escape of her own. She has also suffered a transformation every bit as radical as her mother promised. Her trip is a thrilling even heart stopping ride and when it finally slows down, she describes it:

“I was suddenly a child again, whirling in the teacup ride at the amusement park, where you spun crazily in two directions at once. Now the ride was ending; the teacup was knocking lazily back and forth in its metal track before coming to rest. There was the sound of the buzzer that unlatched the safety gate. But I was still jumbled internally, too disoriented to exit the ride.”

At that point in the story, readers can also take a breath and follow Natalie to a satisfactory end.

Elo’s first book, North of Boston, was well received, and her second thriller lives up to expectations. It’s an entertaining, if sometimes grim, trip into the unknown territory of Siberia. It portrays the gulags of Russia past and present.

If the plot sometimes borders on the fantastic, the descriptions of the people and places ring true. The author is adamant in her Notes at the end that she is well aware some of the spy story is written to move the action along. She reminds the reader this is intended to be fiction, not history: “whenever there was a conflict between reality and the demands of novel writing, the fictional world naturally took precedence.”

Readers can relax and enjoy a fast-moving romp through the shadows of Siberia in Finding Katarina M., learning about an area of the world that is strange, enticing, and also forbidding. As an introduction to a world that is part of the huge nation of Russia, the book lives up to the one of the book’s epigraphs, a quotation from Czar Peter the Great: “Russia is the land where things that don’t happen, happen.”