Find Me: A Novel 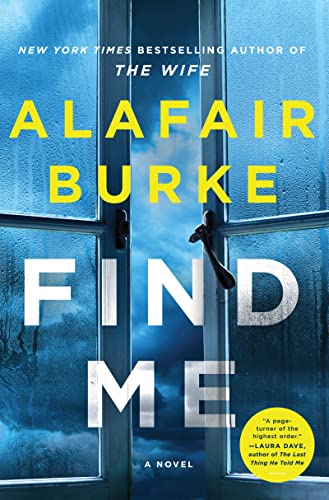 Fifteen years ago, attorney Lindsay Kelly happened across an accident in her hometown of Hopewell, New Jersey, where she discovers a young woman thrown from her vehicle lying in the woods unconscious and in rough shape. Lindsay escorts her to the hospital, taking her under her wing when it is revealed the woman has lost her memory. The unidentified woman, now going by the name of Hope Miller, settles in town still without recollection of her identity. She and Lindsay become close, with Lindsay vowing to do anything to protect her. This is why she becomes upset after Hope decides to venture out on her own, to live someplace where she’s not in a fishbowl where everyone knows her story.

The two women go to the Hamptons for a vacation, and this is where Hope wants to relocate. Though this is hard for Lindsay to accept, she understands why Hope needs this change. They both are concerned about what may have happened in Hope’s past to cause her long-term amnesia. Was she abused? Was she running from someone? Or had she done something illegal?

Hope rents a small cottage in East Hampton and gains employment with a local realtor who agrees to pay her off the books. She proves to be a dependable worker, and one Sunday, she is assigned to clean and stage the Stansfield’s home to put be on the market. Though she is supposed to check in with Evan, her boss, she never shows up. What’s worse, it appears she has stolen $2,000 from Evan and has now vanished.

Lindsay panics when Hope does not return her many phone calls or texts, so she heads for Long Island to search for her. She meets with Evan, who accuses Hope of robbing him, yet he realizes something strange about the situation. He purchased a rug for Hope to use while staging the house, and it isn’t there. What’s up? No rug, $2,000 gone, and no Hope!

Searching for Hope seems hopeless (pardon the pun), but when blood is discovered in the foyer of the newly staged property, Lindsay contacts detective Carter Decker, though he doesn’t seem too thrilled with her explanation of Hope’s past; he believes the woman is just another transient who ripped off local businessman.

“She has spent six hours in her car that day, driving round trip to East Hampton and back, just to have Carter Decker blow her off, claiming that the blood from the Stansfield house was a ‘dead-end.’ Maybe some people would be willing to accept the officer’s concluding, but Lindsay wasn’t in the business of allowing other people to draw conclusions for her.

“Accordingly, she had sent a list of questions to Detective Decker, by voice mail and email: (1) Which databases or other resources had they relied upon to compare the genetic material? (2) What, if any, results had come from such comparisons? (3) What resources, other than DNA databases, were they utilizing to determine the source of the genetic material?

“She checked her cellphone once again for email updates. Nothing.”

The body of a fishing guide is found at the marina, and his death is presumed to be an accidental drowning. However, the coroner discovers a gunshot wound in the back of his head—and his blood matches the blood found at the Stansfield’s. Is this man somehow connected to Hope?

Lindsay contacts Ellie Hatcher, a homicide detective with the New York Police Department, after the DNA blood sample of the deceased man is revealed to be the same as that of a serial killer her cop father had tried to apprehend in Wichita, Kansas, more than 20 years ago. Her father dedicated his life to catching this murderer until his own death shortly after, which was deemed a suicide, though Ellie has grave misgivings about her father’s demise and firmly believes he did not take his own life; but the Kansas police closed that book. What is the connection between what is happening now and that of years ago and miles away? Ellie, Lindsay, and Hope need to get to the bottom of this, for Lindsay is adamant Hope is innocent of any wrongdoing.

Can years’ old questions be answered? Have the murders from long ago and those of recent times been a cover-up of a more critical situation? The juxtaposition of many theories and clues brings together a bigger and more sinister plot while tying up many loose ends that have been hidden for decades. The backstory and subplots in this novel make it a challenging and breathtaking read. In addition, with more twists and turns than a country road, the unexpected ending is a definite whodunnit that is sure to whet the appetite of suspense lovers.