Filthy Rich: A Powerful Billionaire, the Sex Scandal that Undid Him, and All the Justice that Money Can Buy: The Shocking True Story of Jeffrey Epstein 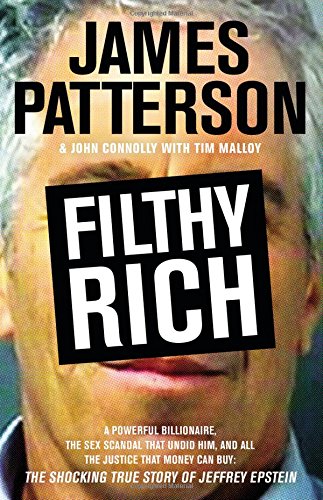 In February 2005, 14-year-old Mary (not her real name) was a naïve and impressionable teenager. She desperately sought out attention and wanted to make a good first impression. The money she would earn in one hour for giving an old man a massage was more than her father made in a whole day.

“What she tells herself, over and over again, is: It’s not that big a deal.”

But of course, it is a big deal and her visit to the mansion of eccentric billionaire Jeffrey Epstein would result in one of the most scandalous criminal investigations in Palm Beach history. In Filthy Rich: A Powerful Billionaire, the Sex Scandal that Undid Him, and All the Justice that Money Can Buy: The Shocking True Story of Jeffrey Epstein, James Patterson, one of the world’s most successful thriller authors in collaboration with John Connelly and Tim Mallory, tackle this deeply troubling and captivating case.

So who is Jeffrey Epstein, really?

Epstein was a highly successful financier, investor, and philanthropist who contributed millions of dollars to academic institutions around the globe. He funded numerous political campaigns and hob knobbed with a wide-ranging and diverse cast of characters that included Prince Andrew, Bill Clinton, Donald Trump, and many others. He rose from humble origins to the heights of New York City and Palm Beach’s privileged and societal elites.

On the surface he appeared to have it all: fame, fortune, and achievement but behind closed doors he wanted more and for many years successfully concealed a perverse sexual appetite for pretty underage girls. This compulsion would eventually led to his downfall with allegations of abuse by dozens of young women whom he employed as “masseuses” at his opulent Palm Beach estate and other properties.

Backed by a plethora of high powered defense attorneys that included Gerald Lefcourt, Alan Dershowitz, and later, Ken Starr, this dream team masterfully orchestrated a plea bargain for Epstein who avoided serious charges in exchange for a guilty plea to felony solicitation of prostitution and the procurement of minors for prostitution.

He received a sentence of 18 months and was required to register as a class three sex offender. One other concession was the media would not be alerted to his ultimate release date, which occurred on July 21, 2009. This was a mere slap on the wrist for the atrocious crimes that were committed, and he served less than 13 months behind bars. Following his release there were lawsuits, seven of which were settled for undisclosed amounts prior to going to trial.

Patterson questioningly writes, “There never was any doubt that Jeffrey Epstein was guilty. The question is, what exactly was he guilty of?” Although Filthy Rich provides an adequate overview of the case in general terms it suffers from a lack of in-depth research of Jeffrey Epstein and other key characters. It ultimately fails to provide any definitive answers to the many questions it poses.

The reader must be cautioned that Filthy Rich is gritty and at times unseemly in its narrative, which devotes large sections of text to the lured transcript testimony of Epstein’s alleged victims. These chapters are extremely detailed and tend to wander through an overabundance of sexually explicit scenarios that appear on the surface to be a concerted attempt by the authors to embarrass Epstein, whom they categorically believe got off easy for the crimes he committed.

Although not one of Patterson’s better written books, Filthy Rich is a fast paced read with many chapters less that a page long. But on a useful note it does raise some deeply disturbing and timely questions about the unspoken rape culture and sexually exploitive views of women that exist within some segments of our society. The crimes for which Jeffrey Epstein were accused and ultimately convicted of are truly reprehensible, and the fact that he was able to use a network of well-connected friends to get out of trouble is even more appalling.

This book leaves the reader with a feeling of dread at the shameful realities of our deeply flawed legal system as it pertains to the haves and have nots. Reader be warned, more than soap and water will be necessary to wash away the sleazy grimness of this obscenely shocking tale.