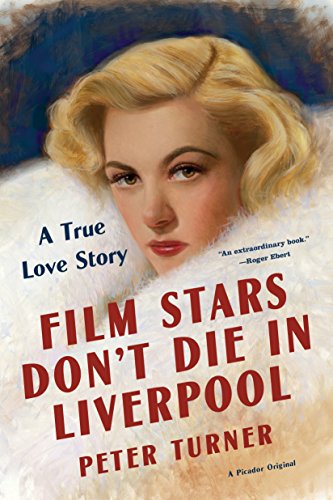 In her brilliant 1977 one-woman Broadway show entitled On Stage, Lily Tomlin performed a bit in which middle-aged married couple Lud and Marie discussed a cake that they had eaten, endlessly argued about it, and attempted to compare its quality to other, similar cakes, on and on, until, after a seemingly endless, pointless discussion, from another part of the house that Tomlin’s imagination had conjured, there was the sound of a door opening upstairs and then, suddenly, loud rock music, followed by the loud voice of their teenager, referred to in the title of the piece as “Dracula’s Daughter,” who screams, “Please stop talking about that cake!” before there is the sound of a door slamming and the music abruptly ends with that slam.

Peter Turner’s memoir Film Stars Don’t Die in Liverpool: A True Love Story begins in much the same way: Turner has gotten some stage work in his hometown of Liverpool, England, and, as his aging parents are taking a trip of Australia, he plans to stay in his family home while they are away.

As Turner comes down for his breakfast one morning early in his play’s run, his mother receives the airline tickets and looks them over. She finds that the travel agent has arranged an overnight stop over for the couple in Manila and has booked them a hotel room for their stay.

From there on, the Ma Turner enacts the roll of Marie and her world is filled with Luds of all ages and genders. All worry over the stop over in the Philippines. All fret, encourage, cajole, and bicker. Pa won’t like it, they worry. Manila is likely an Asian hellhole, they fret. Manila, Manila, Philippines, Philippines, Philippines, on and on, with no Dracula’s Daughter in sight to put us out of our misery.

Happily, just as the reader decides to pitch the book against the wall, Gloria Grahame, whose face is plastered all over the front of the book as the “film star” referenced in the not-wanting-to-die-in-Liverpool title, calls from her hotel in a nearby town and demands that our author rush to her side.

A side note: For those who do not remember sultry actress Gloria Grahame, she was a noir type, most often either the bad-news sort, or the unwitting victim who gets a pot of hot coffee thrown in her face (by Lee Marvin in The Big Heat.). She had a pouty face and a luscious drawl of a voice and her personal life was a mess—at one point her movie director husband came home to find her in bed with his son, her teenage stepson, which did her career not a bit of good back in those days.

But watch her play opposite Humphrey Bogart in In a Lonely Place and you will love her forever.

And for those who remember her, the physical format of Film Stars Don’t Die in Liverpool has much to tell us about Grahame’s place in the modern world.

But then there’s the book itself, which is, after all, what we have gathered to discuss.

Where we left off: Miss Grahame is in distress and needs our author, Peter Turner, a “friend” of some standing, to hurry and help.

On the way to her hotel, our author reminisces of other times he received such a summons. Once, he remembers, her complaint that she could not walk turned out to be the result of a splinter.

This time, things are not so simple. Grahame has checked herself out of a hospital, to which she was taken after fainting at a rehearsal for a play she was to appear in.

When Turner sees her at last, raising her head from under the covers of her hotel bed, he writes: “I couldn’t take my eyes off her. She was wearing old make-up and her face was thin and grey. Her hair was knotted and the brown roots showed. I had to look away.”

Having been told by the doctors in the hospital that the “indigestion” that Grahame reported as the cause of her fainting spell was actually a tumor “about the size of a football,” Turner steps in to do what a friend should. And, together, they go off to Liverpool.

From there, things rather hurriedly go downhill, and not just for poor Gloria Grahame, who is taken upstairs and tucked into a single bed in the “middle room,” where she is largely left to her own devices while, downstairs, everyone frets.

They worry over the presence of the film actress in their spare bedroom. And especially worry when they discover that, by bringing her into their home, they have incurred legal risk: as long as Grahame, who checked herself out of the hospital and into the hotel room, refuses treatment, by British law, none may be given. And yet, if the dying woman actually dies in the house and it is discovered that she had been given no treatment, the family is in legal jeopardy because no treatment had been given.

Therefore, there is the problem of what to do with Gloria. And when to do it. And, apparently most important of all, whether or not Ma and Pa will get to take their trip to Australia.

In among endless cups of tea, they bicker and blame so much that, at one point, the dying woman herself comes down to the kitchen to ask them to keep their voices down, as the middle room is located just above them and she can hear just how troubled and inconvenienced they all are by her presence in the house.

Peter Turner, our author himself, turns out to be a bit of a bastard and a bit of a nut.

He brings a nurse with a drinking problem into the house, and just when things seem to be gong well—Ma can sleep and slip away to the laundromat when she needs to and expects to be able to go to Australia after all—Turner gives the nurse a nice bottle of gin so that she can have a sip as needed and then goes off to give a performance onstage in Liverpool.

When he returns home hours later, he finds the house in hysterics, the nurse plastered and sitting on the bottom end of Gloria Grahame’s bed up in the middle room, intending to give her any number of treatments, while Gloria herself is shriveled up against the headboard, chanting, “Get her out. Get her out.”

The author also, on another evening, after a really good performance, goes off drinking with friends and stays out all night in Liverpool’s version of a Chinatown. He returns home in the morning, and claims to be bewildered when he is confronted by an angry Gloria, who has been left to her own devices up in the middle room.

Worst of all, our author, in writing the book is in a state of ongoing confusion: He appears to believe that his reader is far more interested in the details of his life and how he had that life put into disarray by the inconvenience of having Gloria Grahame dying upstairs, rather than the actual story of Miss Grahame herself and the details of the life story that brought her to such a sad state of affairs.

Admittedly, we are given some scant details of their “true love story” along the way, although they seem to add up to the two being fuck buddies rather than true loves.

Worst of all, Grahame, the film star of the title, sadly only plays a supporting role in this story of her ultimate demise.

Instead, our author, who seems vaguely disinterested in the events ongoing in his house and much more focused on his success of lack thereof in his performance in the local theater—which he reports to us in way too much detail—than whether the woman upstairs is actually still alive when he gets home.

And yet, compared to the others, the guy’s the hero of the book (even if he steals Miss Graham’s one pair of shoes from her suitcase, figuring, I guess, that she won’t need them much longer).

The rest of the family, his mother, father, brother and sister-in-law are such monsters, so goddamned stingy and awful—the mother, for instance, keeps the window open in the middle room, despite the fact that the weather is rainy and wintery cold, because she cannot stand the smell created by her guest’s oncoming demise—that the reader fully expects them to present Miss Grahame with a bill as she is being carried out of the house and whisked onto a plane to New York.

It is a dreadful thing, this book. It uses Gloria Grahame terribly, as a means for the author to get this dreck into print. And as a way to make a few bucks by his association with a famous actress.

Indeed, the thing turns out to be a reprint, which makes this abuse of Grahame’s memory into sort of a literary double-dipping.

When first printed back in the 1980s, only a handful of years after Gloria Grahame died a mere hours after she arrived back in the United States, accompanied by her son and daughter, who came to Liverpool to get her, it was no doubt thought that the book would sell a few copies because of Grahame’s reputation as a Hollywood star.

Now it comes back into print because a film of Grahame’s life is being planned for actress Annette Bening. (Don’t do it, Annette!)

As a biography, the book is a sham. It is clumsy and poorly written and its author is utterly incapable of giving insight into anything, not even his sad need to place himself at stage center, when he is, at best, a supporting player in the tale he’s telling.

Gloria Grahame may waste away in that terrible, cold little bedroom, with only the drunken nurse and the piece of broken mirror to keep her company—a situation so horrible that her children, seeing the state she was in, risked a trans-Atlantic flight because they could not get her out of there fast or far enough.

But [Spoiler Alert!] Ma and Pa do get their trip to Australia.