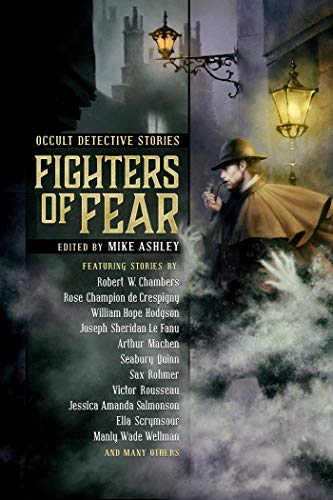 Sherlock Holmes, the most famous fictional detective in the English language, once quipped that, “No ghosts need apply” when it comes to solving a seemingly unsolvable case. Holmes, along with his faithful biographer Dr. John H. Watson, never dabbled in the occult, nor did he take spiritualist matters seriously (unlike his creator, Sir Arthur Conan Doyle). This adamant refusal to traffic in spooks has not stopped a million Holmes pastiches from pitting the “Great Detective” against the legions of darkness. This is true now and it was certainly true during the turn of the 20th century.

As noted in Fighters of Fear, the Edwardian age (1901–1910) was the high-water mark of the occult detective. In magazines like The Strand and Blackwood’s, the progeny of Sherlock Holmes used logic as much as magic to take down otherworldly cases involving ghosts and the occasional Egyptian god. Fighters of Fear is an exhaustive compendium of some of the best occult detective stories, the majority of which were penned by British writers between 1890 and 1930.

Knowledgeable horror fiction fans will certainly recognize more than a few names in this book. The opening short story, “Green Tea” by J. Sheridan Le Fanu, blurs the line between insanity and the supernatural as an English reverend is haunted by the specter of a sadistic simian. Le Fanu is best remembered today for his novella, “Carmilla,” which appeared in the same volume as “Green Tea.” Other major names include Sax Rohmer, the creator of Dr. Fu Manchu; Arthur Machen, the man who created the Angels of Mons legend; Robert W. Chambers, the author famous for The King in Yellow; and William Hope Hodgson, arguably the greatest weird fiction stylist before H. P. Lovecraft.

The majority of Fighters of Fear is composed of short stories written by veritable unknowns like Jessie Douglas Kerruish or Dion Fortune. There are a handful of American pulp writers such as Manly Wade Wellman and Joseph Payne Brennan, while editor Mike Ashley did tip his hat to more contemporary authors like Mark Valentine and Jessica Amanda Salmonson.

Overall, Fighters of Fear is a terrific resource and celebration of an often-overlooked literary subgenre. A truly nice touch is the fact that every short story in here is prefaced with an author’s biography and a short rundown of the occult detective that centers each tale. Through these we learn that the clairvoyant Alwyne Sargent, created by author George Allen Upward, was one of the first female occult detectives, plus we come to read that characters such as Dr. Xavier Wycherley (created by Australian author Max Rittenberg) and John Bell (created by Irish writer Elizabeth Thomasina Meade) never once considered themselves detectives, but rather cutting-edge psychologists. Others, such as Rohmer’s Moris Klaw, conform to the standard mold of the occult investigator: wealthy, reclusive, brilliant, and an adept in the dark arts.

Fighters of Fear is as informative as it is fun. This is the perfect gift for fans of The X-Files, Sherlock Holmes, and the often overlooked Carl Kolchak of The Nightstalker fame.