The Fifth Doctrine (The Guardian) 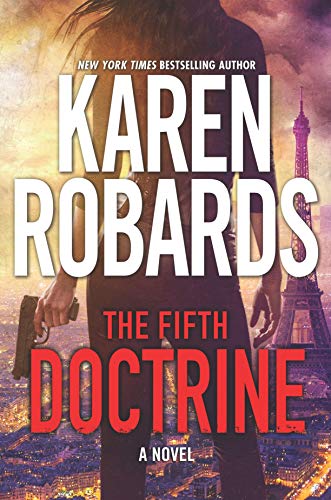 “The trouble with being a sort of Wonder Woman is, once people know you exist, they either want to force you to do their jobs or kill you. Or both.”

Wonder Woman. Nancy Pelosi. Michelle Obama. Although Americans haven’t yet elected a woman as president, there’s a clear cultural curiosity about what a strong and powerful yet honest and enjoyable woman leader might be like.

Into this vacuum has stepped Karen Robards, taking the espionage thriller into the terrain of a bioengineered super-strong female lead: the determined and yet oddly vulnerable Bianca St. Ives. Aware that she’s a genetically modified creation of a government research lab, and well past her due date for termination and destruction, Bianca’s hiding out in The Fifth Doctrine as a private security entrepreneur in Savannah, Georgia, assisted by just a couple of people she trusts—but who don’t know her dark secret. Robards ramps the threat level to red as Bianca confronts the only international spy who’s come close to penetrating her defenses (in every sense). And to escape the pressures that Colin Rogan’s immediately applying, Bianca may lose her business, her friends . . . and her privacy.

Because the trouble with being a sort of Wonder Woman is, once people know you exist, they either want to force you to do their jobs or kill you. Or both.

Bianca’s determination to protect her allies leads her to contemplate just disappearing. But (as revealed in the two previous books in this series, The Ultimatum and The Moscow Deception) Bianca already knows that “they found her in Macau, they’d found her Moscow, and now they’d found her in Savannah.” While she works to revamp her own defenses, she’ll have to tackle Rogan’s mission for her, one that requires her to transform into another woman who’s already an international operative.

Rogan directs her, “By the time we leave for the airport in the morning, you will be Lynette Holbrook and Operation Fifth Doctrine will be up and running.” What’s the name stand for? Rogan explains that the US military has five domains of war, and this one, the fifth, is information. “Kind of gives that whole ‘war of words’ thing a brand new meaning,” Rogan cracks.

Hot topics from today’s news cycle hiss and crackle in The Fifth Doctrine: Korean treachery, the spread of atomic weapons, terrorist attacks and traitors motivated by money or bizarre loyalties.

Robards writes with fast scenes and the equivalent of a car chase every couple of chapters. Her special seasoning is a pulse-racing tide of attraction between Bianca St. Ives and Colin—balanced with logical mistrust, physical assertiveness, and a strand of growing respect between two people who would have liked to be colleagues instead of enemies. But could that ever happen in their world?

Series readers be warned, Bianca’s past includes more threats than Colin, and some of them are even closer to her heart. Brace for an exhilarating ride and a finale that assures the series is far from over.