The Field of Blood: Violence in Congress and the Road to Civil War 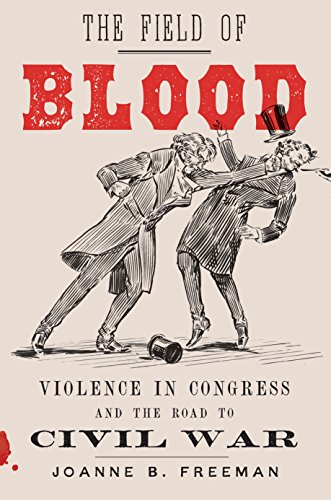 Historians of political culture illuminate the human realities of governing and legislating. Understanding that political history is substantially more than Congressional debates and election returns—working at the nexus of public and private—these scholars reveal the unspoken “rules” that govern the game of politics and its players.

Joanne B. Freeman, a professor of history at Yale, is one of the most talented decoders of the “rules” and rhythms of early U.S. politics. In her first book, Affairs of Honor: National Politics in the New Republic, Freeman deftly revealed how late 18th century politicians—in absence of ossified traditions or organized political parties—depended on a code of honor to supply the “grammar” of political combat. Now, in this eagerly awaited book, she turns her attention to the U.S. Congress in the three decades immediately preceding the Civil War—a remarkable period that witnessed “more than seventy violent incidents between congressmen in the House and Senate chambers.”

Freeman’s aim is not to awaken old revisionist arguments—popular in the early 20th century and beyond—that politicians annexed by unchecked emotions “blundered” the nation into a “needless” or “repressible” war. Nor is the purpose of this book to add human texture or emotional depth to our stock images of starched congressmen—though The Field of Blood does that admirably (with vivid descriptions of the Capitol’s tobacco juice-stained rugs, Bowie knife wielding members of Congress, and the overcrowded House chamber’s putrid air).

Instead, she seeks to unlock “the emotional logic of disunion” by showing us how northern and southern congressman came “to distrust one another”—and how those congressmen “exposed the emotional power of sectional degradation to a watchful national audience” that would, within years, amble down the road to disunion.

Leavened by the author’s wry wit, the book is a page turning triumph of narrative history, deeply researched and persuasively argued. It explains, more lucidly than ever before, “the wrenching experience of plotting a political path in a nation behind torn in two.”

Freeman’s chief protagonist is Benjamin Brown French—the New Hampshire born politico who, as clerk of the House and later Commissioner of Public Buildings in Washington, D.C., literally had a “front row seat” to Congress on the road to the Civil War. French’s sprawling diary, which extends to 11 volumes, serves as Freeman’s inimitable portal to antebellum Washington.

French also personifies Freeman’s argument. Beginning his political life as a Democrat disinclined to meddle with slavery lest it imperil the Union, he ended life as a middle of the road Republican. After years of looking on as southern members of Congress “bullied,” intimidated, and cudgeled their colleagues from north of the Mason-Dixon, French grew defensive of section.

For decades, Freeman documents, southerners taunted, gagged, and riled their northern counterparts in Congress. But beginning in the mid-1850s, northerner lawmakers, especially those representing the brand-new Republican Party, “fought to wrest control of Congress and the Union from the Slave Power.” Their constituents—once adverse to dueling and violence—now demanded their members of Congress stand up and speak out.

By the eve of the war, Congress resembled “an armed camp.” Violence in Congress became something of a self-fulfilling, self-perpetuating prophecy. Unloosed from the moorings of party (the Second Party system collapsed under pressure supplied by the debates over the Compromise of 1850 and Kansas-Nebraska Act), telegraphs feverishly clicked out new and often plausible conspiracy theories. “In the process,” Freeman writes, “Americans lost faith in the institution of Congress. They also lost faith in one another.”

Freeman is not the first historian to write about the political culture of Washington in this period. In Washington Brotherhood: Politics, Social Life, and the Coming of the Civil War (2012), historian Rachel Shelden posited that interpersonal friendships among politicians in the nation’s capital surpassed sectionalism and helped to broker Union-saving compromises. While Freeman hardly denies these cross-sectional ties, she argues that “familiarity could”— and often did—“breed contempt.”

Besides, Freeman writes, “‘getting along’ is a hard thing to measure.” Shelden contended that social life in Washington “insulated” politicians from disunionist fervor on the ground; secession, she argued, was a “rejection of federal politics.” But Freeman makes clear that congressmen were performing for (and cared deeply about) their constituents. “As a representative institution,” she writes, “the U.S. Congress embodies the temper of its time. When the nation is polarized and civic commonality dwindles, Congress reflects that image back to the American people.”

In our own particular moment, wearied of the boorishness that mars our politics and the brazen falsehoods that short circuit reason and rational debate, some readers may find a history of congressional violence and incivility off putting. Freeman concedes in a brief Author’s Note that writing this book in the age of the Tea Party and Trumpism “was no easy thing.”  But this is a study that scholars and popular audiences alike need to digest.

By charting the long history of political combat and popular misgivings about Congress, the book lends essential context to our own, current moment. Often flawed “human realities,” Freeman reminds, “[underlie] the process of national governance.” Further, by reminding us that years of violence in Congress yielded to civil warfare that drenched the nation in rivers of blood, the book issues an important caution. The Civil War not only saved the Union and ended slavery, but also chastened the country and its politicians.

Ultimately, Freeman concludes that her book is a “story of anger leading to justice.” Empowered by the knowledge that distrust and dysfunction in Congress have been far worse, may we find justice for our own times—and well before we reach the steep banks of Bull Run.