Ferdinand, The Man with the Kind Heart: A Novel 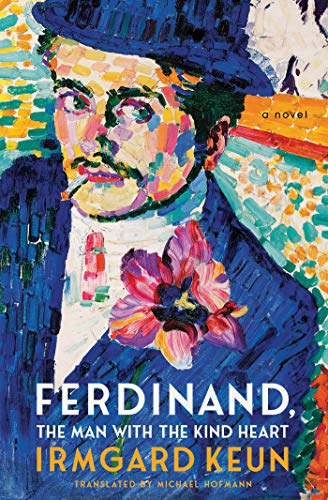 On the surface, Ferdinand, the Man with the Kind Heart is a short, charmingly absurd portrait of postwar Germany. Its cast of misfits bumbles through quixotic business ventures, genteel poverty, eviction, hapless romance, and even prison.

Of course a novel about Germany set in 1948 could hardly ignore that country’s 12 earlier years under Adolf Hitler. Sometimes author Irmgard Keun treats that horrible history with quiet but deadly sarcasm; however, sometimes she dashes it aside with a disturbing casualness.

The book—first published in German in 1950 and now translated into English by Michael Hofmann—is more like a series of anecdotes and character sketches than a narrative. The main plotline, such as it is, involves the halfhearted efforts of the eponymous narrator, Ferdinand Timpe, to cancel his engagement to Luise, because “her presence has something oppressive about it.” Also, he’s not in love with her and doesn’t quite understand how they came to be engaged.

Ferdinand strolls through the lives of assorted friends and relatives, vaguely wondering if he should find a more reliable career than his current gig as a “cheerful advisor” in a friend’s somewhat sleazy but steadily growing business, which encompasses “departments for podiatry, charms, talismans and scents, for clairvoyance and crystallography and the interpretation of dreams, departments for color, astrology, chiromancy, and graphology.”

Among the book’s oddball characters are Ferdinand’s mother, Laura, “a genius of sleep” who simply closes her eyes and plops into a peaceful slumber at any inconvenient time, such as when a debt-collector arrives. Another is the former postal worker Damian Hell, who one day abandoned his route in Cologne and “traveled out to the new suburb and dropped letters at random in various boxes.”

Occasionally, the book rises above its light-hearted tone to craft some sharp insights into human nature, including the German national character that enabled the rise of Hitler.

Why do so many German women flirt with French, British, and U.S.  soldiers during the Allies’ postwar Occupation? “My God,” Ferdinand thinks, “hadn’t they dinned it into the poor creatures that the uniformed, powerful, victorious hero had to be the woman’s highest ideal? What was promulgated was this: the German wins, and whoever wins is German.”

Yet in too many instances, the Nazi era seems to be treated as a throwaway line. For instance, Allied policy during the first postwar years was to “de-Nazify” members of the Nazi party and the SS by removing them from positions of influence. Blithely, Ferdinand notes that one acquaintance, a fixer named Herr Pittermann, “engaged himself on behalf of people who wanted or needed to be de-Nazified . . . Pittermann propped them up. Pitterman lent them support. One day they were de-Nazified. They would have been without Pittermann’s intervention. Whereas Pittermann would probably have perished of hunger and thirst” without that income.

Nor does Ferdinand seem bothered that his future father-in-law had a career that also requires de-Nazifying.

Moreover, the book has spots of outright racism. Ferdinand says his future mother-in-law “slaved away like a coolie.” (There’s a far worse example, involving Black children, that is simply not printable here.)

Were such sentences meant sarcastically? Were they seen as standard fare humor in 1950, when Ferdinand was written? The understated tone can make it hard to tell the author’s intention.

Keun, the author, presumably didn’t find the Nazi rule funny in her own life. A bestselling author of books that often focused on women and sexuality in the prewar Weimar era, she fled to Belgium and then the Netherlands after her writing was banned during the early years of Hitler’s rule. In 1940 she sneaked back to Germany under a fake name, staying there until her death in 1982.

Certainly, this novel is unusual in the genre of World War II literature. For that reason alone, it’s worth reading.