The Feral Detective: A Novel 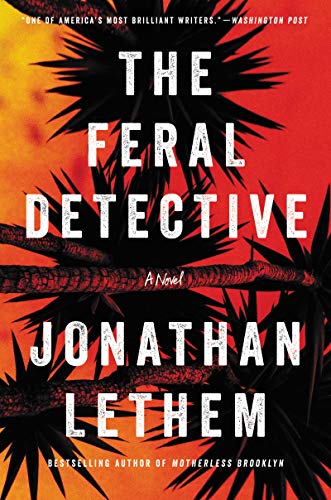 “one of the most unusual, unlikely, and un-put-downable PI novels ever.”

When Arabella, an Oregon college student, vanishes into a Southern California desert cult, it’s Phoebe Siegler’s call to action—because Arabella is the daughter of her best friend and somebody needs to do something, right? A referral near a mountain retreat connected with both Buddhist monks and Leonard Cohen leads Phoebe to a highly eccentric local detective who may be able to help. So The Feral Detective, one of the strangest and deepest mysteries of this year, begins as a missing-teenager case, only to morph into looking at what’s missing in Phoebe herself.

Of course, she doesn’t see herself as having issues, other than her tremendous rage and grief surrounding the 2016 presidential elections. (Somebody needs to do something!) Obviously, private eye Charles Heist, with a live opossum in his desk drawer and a wild young woman burrowing into the blankets on the office couch, is a prime candidate for Phoebe’s judging and labeling. In fact, she tags him as “the feral detective,” using a term that most of us only attach to starving and flea-bitten cats that won’t accept affection. Is it the investigator who fits the term? Or is it Phoebe herself, with her abrupt sexual approach and immediate aggression toward the people she meets?

To get a hint at where the missing Arabella may be, PI Charles Heist opts first to assist a group of “homeless” people (really quite at home in their scrap of vulnerable land) to evacuate from a massive gully—a “wash”—before the oncoming rain sweeps them away. They may already know Arabella.

Phoebe accepts the role of sidekick for the effort, doing something that’s more productive than her usual routine of watching and hating the politics of the moment. Then suddenly Heist leaves her at her hotel and takes off with some of the rescued outdoor folks:

“Then came a strange time. In the hours before Charles Heist reappeared and took me away in his truck again, I entered a kind of spell or pall as if the small hotel room were a kind of tunnel too, and I’d been left behind instead of rescued. I stripped off my soaked clothes and took a hot shower, and while one part of my mind urgently wished to scrub off the mud of the Wash, the rank smell of the tunnel and of my homeless companions in the cab of Heist’s pickup, another part mourned some loss I couldn’t specify. I felt I’d been allowed to taste Heist’s world, teamed with him in pursuit of abjectly hopeless tasks in a pit in the rain. And then I’d been expelled.”

But Heist does return, with a hint of where to look for Arabella: amid the often dangerous vagabonds, hippies, and outcasts who make up a pair of opposing cults out in the desert east of Los Angeles. Is Arabella caught up unwillingly in a massive feud between two groups known as the Rabbits and the Bears, or is she about to take part in a ceremony that will turn her into a desert queen? If Phoebe and Charles do extract her, will Arabella consent to go home with them?

Lethem’s writing weaves together the surreal and the heart-wrenching, and Phoebe’s strong dark voice speaks with the same alcohol-soaked despair as in earlier Los Angeles noir. At times, she sounds like one of the PIs of the 1930s, harsh, unlovable, able only to attack the world that refuses to accommodate her.

Readers of classic noir will recognize and bond to Phoebe’s gruff assessments of her case and her life (post-election trauma, anyone?); imagine Raymond Chandler and James M. Cain crushed in the latter-day typewriters of Lisa Brackmann and Taylor Stevens, then dried out under a desert sun. Complex, tragic and comic at once, and utterly memorable, Phoebe and her “hired gun” become memes for all of us trapped in political quagmire and questions.

But going deep isn’t the only way to read The Feral Detective: It’s also one of the most unusual, unlikely, and un-put-downable PI novels ever.