Fentanyl, Inc.: How Rogue Chemists Are Creating the Deadliest Wave of the Opioid Epidemic 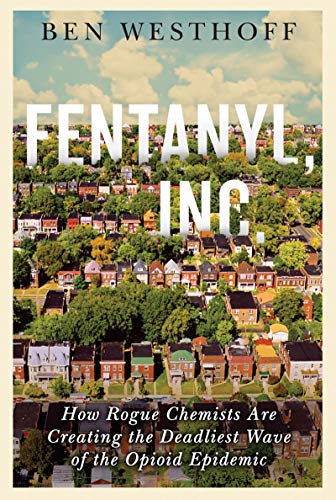 “Fentanyl, Inc. is an important book that arrives at a key juncture in the opioid crisis.”

At the start of Fentanyl, Inc., author Ben Westhoff introduces readers to Bailey Henke and Kain Schwandt, two young opioid addicts on a road trip with a mission: They’ve set out to break free from their addiction to fentanyl. Throughout the book, the author brings Henke and Schwandt to life with colorful details—like the night they pilfered beers from Henke’s parents so they could try to ease their withdrawal symptoms as they faced the battle to get clean.

Those personal details are the highlights of Fentanyl, Inc. an exhaustive history of the development and rise of the drug at the center of the opioid crisis. The information uncovered by Westhoff, an investigative reporter, will no doubt prove useful to lawmakers, addiction counselors, and anyone else who is dealing with opioid addiction.

But where the book really shines is in Westhoff’s ability to get inside the lives of his characters, from addicts like Henke and Schwandt, to the scientists who initially developed opioids, to the Chinese chemists who are manufacturing fentanyl knockoffs—and profiting hugely off the global rise of opioid addiction.

Not long after driving home the ravages of opioid addiction with the story of Henke and Schwandt, Westhoff introduces readers to Paul Janssen, the Belgian chemist who invented fentanyl in 1959 by tweaking the chemical structure of morphine. Fentanyl was designed to be a safer and more powerful painkiller, and it wasn’t until well after Janssen’s death in 2003 that it became the scourge of the opioid crisis, Westhoff explains.

Turns out Janssen’s company was bought by Johnson & Johnson—one of several companies now facing lawsuits for its role in the opioid crisis. In fact, just before Westhoff’s book was published, J&J was ordered by a judge in Oklahoma to pay a $572 million judgement in a case alleging the company played down the dangers of fentanyl in marketing the drug. The company plans to appeal the decision.

Although fentanyl is far from the only opioid, Westhoff’s decision to focus his book largely on this one drug and its analogues makes sense. In 2015, just as the epidemic was reaching crisis level, physicians prescribed fentanyl 6.5 million times, Westhoff reports. And it was the inspiration for many more drug developers and sellers eager to pitch their creations as “safe” alternatives to traditional party drugs.

One such seller profiled in Fentanyl, Inc., is Matt Bowden, a New Zealand club-goer who read about a compound called BZP that had failed in clinical trials as an antidepressant. But BZP produced an amphetamine-like high, so Bowden decided to team up with manufacturers in China to make it, and then to distribute it in New Zealand clubs.

“Bowden is not a typical drug lord,” Westhoff writes. “Rather, he seeks out high-profile opportunities to make his case, and for a time could be seen on New Zealand television wearing flamboyant suits, science-fiction-inspired garb from his steampunk fashion line, and platinum blonde, feathered hair.” It’s yet another strong character study that helps elucidate the fallout from the invention and spread of fentanyl and other opioids.

Westhoff goes on to gain access to some of the top producers of fentanyl in China. He details how he began making contact with Chinese suppliers using a fake name and story, over the Dark Web, by searching terms like “buy drugs in China.” That’s how he gained access to Dowson Li, a chemist who invited him to his lab outside of Shanghai, all the while grilling him to try to figure out if he was actually a reporter. Westhoff managed to persuade Dowson that he wasn’t a reporter but rather an interested buyer, which got him access to a sprawling drug lab.

Westhoff also carefully explains how easy it is for Chinese manufacturers to ship fentanyl into the United States undetected. The U.S. postal service does employ sniffer dogs and technology to scan unopened packages, but with more than 400 million international packages arriving each day, it’s simply impossible to catch all the illicit drugs.

This full chronicling of all the players in the opioid crisis—from the manufacturers to the addicts themselves—is a feat of reporting, to be sure. And while the many details Westhoff uncovered are likely to leave some readers enraged, Fentanyl, Inc. is an important book that arrives at a key juncture in the opioid crisis.