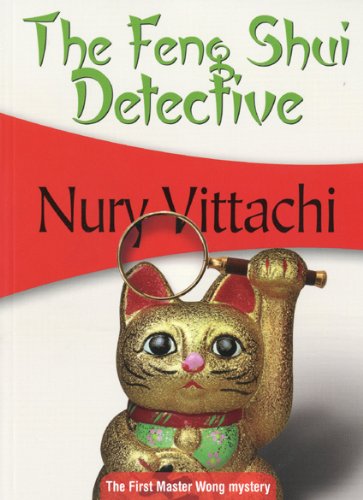 “. . . the point with The Feng Shui Detective Goes West is to enjoy the effervescent ride.”

C. F. Wong has set up a side business to his feng shui consulting detective agency. The first product of the new venture is producing highlighters shaped like fruit. For the highlighting color he chooses the very elegant, very best quality ink: black.

For some odd reason, the deal is cancelled, and he has now owes money to a man with a business card that reads The World’s Only Indian Member of the Chinese Mafia. He has 10 days to pay it back.

Thus begins a zany romp of head-snapping plot twists. In this book, there’s no time to for a dramatic arc to develop, this mystery is more like a Marx Brothers movie. Remember the scene in Night at the Opera where more and more people crowd into the stateroom?

Wong has two ruling passions, making money, and feng shui, the Chinese art of balancing people’s relationships to their environment. Feng Shui has many rules, from using mirrors to redirect light and energy, to getting rid of clutter. It had a moment as popular decorating technique in the West, but along with avocado kitchen appliances and pink bathroom fixtures, it eventually faded from the forefront of popular design consciousness. But C. F. Wong still believes deeply in its practice.

Luckily, he gets a phone call from someone who represents the royal family of Great Britain. Who needs more harmony than them? Wong and his assistant Joyce are invited to London, to feng shui a residence. In case this doesn’t work, the royals hedge their bets: They’ve also invited a vaastu man, a dowser, and an exorcist. Travel is first class in the world’s most expensive airplane, a specially adapted A 380 Airbus called Skyparc.

Unfortunately, just before takeoff a man is shot, and the main suspect is an environmental activist friend of Joyce’s. For a minute Joyce is not coming, then as Wong sees his opportunity slipping away, he demands she accompany him.

She’s out, she’s in, she’s out, she’s in—all in the space of a few pages—creating one of many ping pong moments in The Feng Shui Detective Goes West. In one of the most humorous scenes, during the flight, the Indian vaastu explains how the Chinese stole the entire concept of feng shui from India.

The first half of the book takes place on the ground in Hong Kong, the second half in the plane. More interesting action happens on the ground, as in an early illuminating passage when Joyce needs directions and explains that depending on which East Asia country one is in, the answer varies.

In the Philippines and Sri Lanka, the person you ask will often walk you all the way to the door of the place you are looking for—and sometimes come in with you.

In Hong Kong and Singapore, the person will tell you the immediate direction, for example, take the next left. When you get there you will ask someone else for further directions. Those moments, along with the passages explaining genuine feng shui lore comprise the best passages in The Feng Shui Detective Goes West.

Nury Vittachi has a keen ear for the foibles of West meeting East. Boasting that your queen can trace her linage back 1,000 years does not impress the Chinese who can trace theirs back 5,000 years.

Once on the plane, it feels like the characters will never get off. Perhaps the plane section of the story is meant to invoke the claustrophobia of a locked room mystery, but the plane is so big it feels like a hotel: Up the stairs, over to the bedrooms, down to the food—there’s a lot of rushing around. There’s no time for character development, so the reader doesn’t have much to invest in catching the bad guy because we don’t feel enough for any of them.

But the point with The Feng Shui Detective Goes West is to enjoy the effervescent ride.