We Should All Be Feminists: A Guided Journal 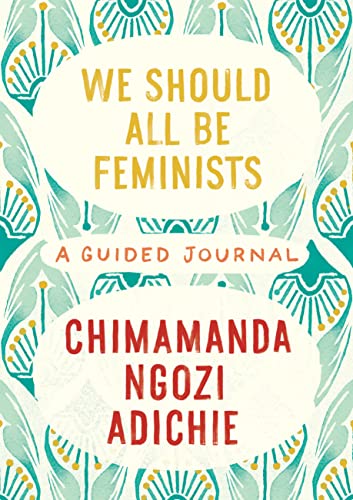 We Should All Be Feminists: A Guided Journal is, really, a course about the world, as it is, as it has been, as it could be if we would finally see clearly the extent of the damage that patriarchal thought has done to us all, not just to women.

Though it is, of course, based on the book within its title, it truly does go beyond what that book did so successfully (help destigmatize the concept of feminism) by laying out a daily practice that begins with understanding, and then coaxes out each reader’s engagement to come up with better definitions, better ideas, better ways for feminists of all sexes and races and sexual and identity preferences to exist in the world of men.

It starts with the basics. But soon it goes deep into the things affecting women’s day to day interactions. See below how each concept is made so much more profound by the thoughtful questions posed along with them, as well as by the space to engage in a focused, and detailed way:

“Feminist: a person who believes in the social, political, and economic equality of the sexes.

“How would you define feminist?

Try to remember the first time you heard the word “feminist.” How did it make you feel? How did the people around you react to this word?”

“Some people ask: ‘Why the word feminist? Why not just say you are a believer in human rights, or something like that?’ Because that would be dishonest. Feminism is, of course, part of human rights in general—but you choose to use the vague expression human rights is to deny the specific and particular problem of gender.

“In the Venn Diagram below, use the intersection to list all the qualities that feminism and human rights have in common.”

Other feminist books are also quoted, expanding the active part of the conversation this journal aims to augment, in comparison to the base book from which it is developed, as in the following quote taken from Dear Ijeawele, or A Feminist Manifesto in Fifteen Suggestions:

The concept here is:

“Beware the danger of what I call Feminism Lite. It is the idea of conditional female equality . . . Feminism Lite uses analogies like ‘he is the head and you are the neck.’ Or ‘he is driving but you are in the front seat.’ More troubling is the idea, in Feminism Lite, that men are naturally superior but should be expected to ‘treat women well.’ No. No. No. There must be more than male benevolence as the basis for a woman’s well-being.”

The way to go further, to engage with the material:

“Use the space below to list five examples of Feminism Lite that you have witnessed or experienced. Explain why each example is problematic.”

There is one other thing this book does. It breaks it down. By going beyond trivia and female profiles in courage. By engaging the reader/writers of the original book to think deeply about complex issues. By highlighting what should be simple but has been made complex unnecessarily. By breaking down the minutiae and multiplicity of thought and circumstance built into our societies to preserve patriarchal ways of defining how woman are able to live their lives in the world. It’s a lot, but the book takes you by the hand.

It allows for group study. It is a smart, informed guide to modern, intersectional feminist thought. It conveys unequivocally that accepting that boys being boys in the real world means there continue to be victimized women and girls hanging from the opposite end of their sticks.

And we are all the worse for it.

And it doesn’t have to be this way.

The conversation the original book, and We Should All Be Feminists: A Guided Journal, both stellar contributions to the world by Chimimanda Ngozi Adichie, will make that ongoing conversation richer and more effective.