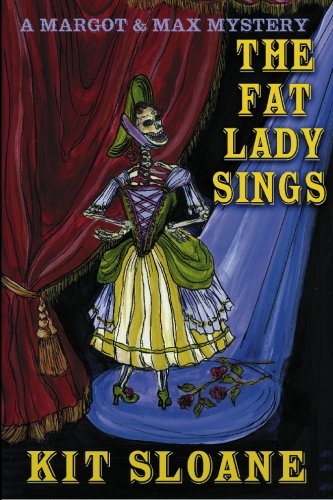 People in the entertainment business realize their lives rotate between being overwhelmed with work or the silent lull in-between jobs. That is the situation for Margot and Max. The Fat Lady Sings is the seventh in the Margot and Max series by Kit Sloane featuring film editor, Margot O’Bannon, and her significant other, Max Skull, a well-known film director. Margot usually works as a film editor for her significant love, Max. Unusually now, he has no film projects that he is writing or directing. The two are enjoying each other’s company in this time which is not hectic while Max searches for a new film story. While being part of the audience for their son in his college theatrical performance, Max and Margot are honored to meet the cast which is, in turn, honored to meet these professional film-business celebrities. Especially notable is the diva, Lenore Chambers, who is thrilled to meet them, especially Margot. Lenore does mention that they recently lost a member of their musical group, a soprano who was rumored to die by being impaled, while in actuality, she was poisoned.   Lenore later arranges to send Margot and Max tickets for Gilbert & Sullivan’s The Mikado which is being performed by the touring troupe in Los Angeles. Max feels that his recent experience of one musical by Gilbert & Sullivan has more than fulfilled any need in that category and suggests that Margot go and take one of her friends with her.  As the two are arriving at the theater, they are shocked to see SWAT teams circling the theater.  Curiously, the two walk to the theater and observe Lenore holding the hand of someone who is on a stretcher with a sheet covering them. Later they are told that a bomb went off in the theater killing the director of the production. Who would kill the director of a musical performing company who specialize in Gilbert & Sullivan musicals?   Now Margot has agreed to work with the company as the director in their performance of Gilbert & Sullivan’s Patience. The company knows their lines, but Margot wants to find a new way to raise their performance to a higher level. The Fat Lady Sings is fun reading. Each chapter keeps you wondering about who is safe, who could be killed, and why. Added to that is the taste of the satirical Gilbert & Sullivan’s operettas which poke fun at society at all levels.   Ms. Sloane is recognized as the first fiction editor of Futures Mystery Magazine, a longtime member of Sisters in Crime, Mystery Writers of America, and Mystery Women of the UK. She lives with her husband, who is a professor, on a horse ranch in northern California.

Teri Davis is a freelance editor and writer.