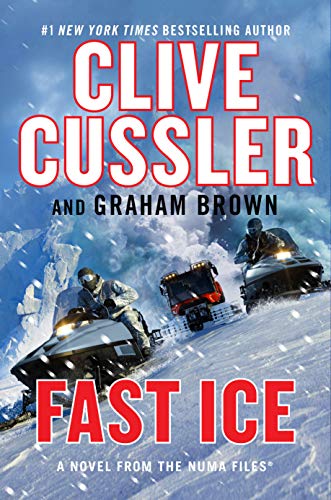 In the late 1930s, Nazi Germany planned to construct a military base in Antarctica, but after an inexplicable plane crash interfered with the Luftwaffe’s explorations there, the regime’s plans turned elsewhere.

Now, a megalomaniac billionaire and his scientist sister have discovered the secret behind the plane crash—mysterious algae that causes water to freeze at an alarming rate—and they’ve hatched a plot to deploy the algae as part of a plan to destroy the world’s climate and conquer what’s left of civilization in the aftermath.

Can Kurt Austin and his sidekick Joe Zavala discover this madman’s secret in Antarctica and foil his plot before it’s too late?

Fast Ice is the 18th novel in Clive Cussler’s NUMA Files series, which began with Serpent in 1999 and has been rocketing full speed ahead ever since. One of the legendary stars of the action-adventure thriller subgenre, Cussler was also responsible for 26 novels in the Dirk Pitt Adventure series, 15 thrillers in the Oregon Files series, 12 Isaac Bell Adventures, 13 Fargo Adventures, five nonfiction titles, and, for something completely different, two children’s books.

Not restricted to the imaginary world of action thrillers, Cussler, who passed away in 2020, was also an adventurer in real life. A member of the Royal Geographic Society and the American Society of Oceanographers, he was an underwater explorer who founded the actual National Underwater Marine Agency (NUMA) as a non-profit organization to search for shipwrecks and report on their findings.

His protagonist Kurt Austin is the director of Special Projects with NUMA, a government organization in Cussler’s fictional world. Because he’s such a familiar figure to longstanding readers of the series, he’s inserted into the action in Fast Ice without much of an introduction and little to no development to speak of as the story unfolds.

Not that it really matters. Author Graham Brown, who has “co-written” nine NUMA thrillers to date, including this one, understands full well the importance of a briskly moving plot above all else, and Fast Ice is a success in this regard.

Despite the fact that the overall storyline doesn’t make a heck of a lot of sense—algae that can freeze the world’s oceans solid, a gigantic ship made of ice to deliver the deadly cargo, and a madman who has purchased islands along the equator from which to launch his ultimate conquest—you’ll find it difficult to put the book down once you’ve gotten into it.

Oddly, though, Kurt’s discovery of the lost Luftwaffe airplane, which one would expect to be a high point in the story, comes when he’s blowing up bad guys and causing avalanches to bury them in snow and ice. As such, it’s a bit of a non sequitur and rather anticlimactic. He and Joe barely stop for a quick glance before careening off to continue their mission.

Which is a bit of a shame, because the historical artifact aspects of Cussler’s tales always provide a great deal of side interest. Too bad Brown wasn’t able to indulge our urge to crawl inside, poke around, and savor the smells and sights of lost history.

Fast Ice is good entertainment for everyone who enjoys action-adventure thrillers while not asking very much from them other than to help pass the time and to hold one’s attention throughout. And after the year we’ve had, what more could we ask?