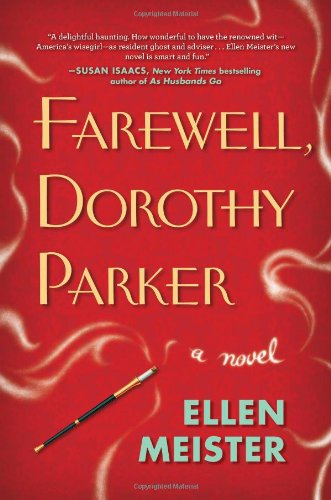 “I don’t care what is written about me, as long as it isn’t true.”
—Dorothy Parker

Given that stricture, there is little doubt Mrs. Parker would have approved of Ellen Meister’s Farewell, Dorothy Parker.

On the pages of popular entertainment magazine Enjoy, movie critic Violet Epps is a master of the cutting phrase and erudite jab. Her readers would be surprised to find that in her real life she’s rather meek. Her inability to speak up for herself has left her trapped in a bad relationship, bullied by an intern at her paper, terrified of public speaking, and in serious danger of losing contact with her orphaned niece, Delaney.

All of that changes on a fateful afternoon at the Algonquin Hotel, when Violet’s idol and Algonquin Round Table wit Dorothy Parker steps from the pages of an old book and begins to counsel her young admirer.

Violet’s life then takes some wild turns, some for the better and some not so much, until Violet is forced to confront both her own personal demons and the cantankerous Mrs. Parker.

Ms. Meister has written a froth of a novel, full of period detail from the Roaring 20s and the acerbic wit of Dorothy Parker. It’s clear that Mrs. Parker is a favorite of the writer, as she is by far the strongest and most lovingly detailed character of this book.

Ms. Meister has made good use of the legendary theatre critic’s verbal talents, slipping many of Mrs. Parker’s bon mots into dialogue and reminiscence. She’s captured both the world weary cynicism of a woman who could shred her detractors in print and in speech within seconds and the curious tenderness of the same woman, who felt so strongly about prejudicial injustice that she went to jail for protesting the Sacco & Vanzetti case and left her entire estate to Dr. Martin Luther King Jr. and the NAACP.

Though many of Mrs. Parker’s clever quips are part of everyday lexicon, less is known about that side of her; and Ms. Meister does a good job of revealing the vulnerable woman underneath the brittle laughter.

Violet Epps is not as well defined. It’s fair to say that she’s standard romantic comedy trope: clumsy, inarticulate, wimpy, self-loathing, and ensnared in her past—but she has a dream job in one of the toughest industries and biggest cities in the world, and a great apartment, anyway. She’s not annoying, and can be quite funny at times, but she is vaguely defined, coming into sharp definition only in relation to her encounters with Mrs. Parker.

As in most popular novels, the secondary characters are pretty stock, there to move the story along but not very interesting in themselves. The love interest, Michael, is particularly flat. Surface details are given—great body, African American, speaks with a lisp—but nothing to make it clear why Violet likes him, he likes her, or why he’s part of the story aside from being reason for one of Violet’s periodic crises.

If the love angle were stronger, the story would slide neatly into the romcom niche as well: personable, tic-strangled woman faces a series of crises before discovering her own power and worth. There is the requisite Bad Boyfriend, the wise cracking gal pal (played by Mrs. Parker); the nosy, annoying older couple (in this case, her niece’s grandparents); an irritating co worker needing to be taken down a peg; and the Dream Man.

Work crisis, personal crisis, romantic crisis (which the heroines always inexplicably try to solve with a lie)—this novel hits all of the notes. To Ms. Meister’s credit, she’s able to do so workably and with charm. While her use of those tropes doesn’t break any new ground, she’s written a likable novel.

A few aspects of the book might be off-putting to some readers. First, the initial chapter is front loaded with information that would have been more effectively delivered in dialogue or sprinkled more organically throughout the story.

Chapters are more like scenes, short and with a single note. This is becoming common in popular novels, but it often drains a story of narrative flow and makes it difficult to build effective bonds between the reader and the characters.

Chapters in the second half of the novel also have a problem with veering off into Violet’s memory of past events in such a present way that the narrative becomes muddled; readers will likely end up going back to see if they missed a time skip.

Regardless, Ms. Meister’s Farewell, Dorothy Parker is enjoyable. Violet does the requisite growing up, gets her man and her niece, and all is well in the world at the end of the novel.

Nonetheless, Dorothy Parker is the real star of this show.