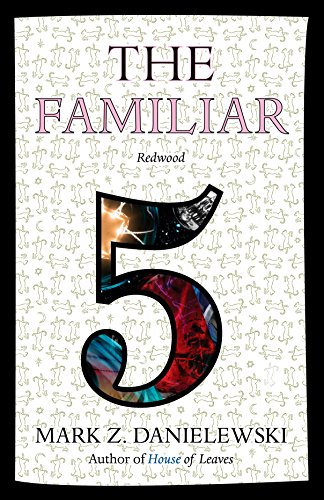 “If William Gibson, Michael Connelly, and Neil Gaiman wrote a series, it might end up looking like The Familiar.”

Winter is coming, to co-opt the catchphrase from another popular series. In this case winter is in reference to Xanther. The last installment, Hades, revealed Xanther’s favorite ice cream was pomegranate. There was also the supernatural incident involving the ballet put on by Xanther’s grandmother.

The Familiar, Volume 5: Redwood, by Mark Z. Danielewski is the “season finale” of the franchise. (Mr. Danielewski gives each book beginning and end credits. At the very beginning of each book are “trailers” for new shows.) As with other season finales, there will be monumental confrontations, major changes, and devastating cliffhangers. Beloved characters will also die.

Yet for all the experimental bells and whistles of a Danielewski production, the “TV season” format hearkens back to the Victorian Age with its serialized storytelling. Touch of Evil was Orson Welles creating the best B-movie ever made. The Familiar series is a penny dreadful for the present media-saturated, pop culture-savvy era.

Redwood has Anwar and Xanther returning from New York City after Anwar’s interview with Galvadyne. Xanther reunited with “the little one.” Five volumes in and her pet cat still remains unnamed. The fifth volume revolves around three important meetings. Despite his very best efforts, Anwar is unable to shake an unknown caller from asking for his cat back. When all efforts fail, Anwar has to confront Jingjing and Tian Li. Jingjing, more unhinged than ever, screams about wanting his cat back. It is revealed that the cat isn’t his per se, but belongs to Tian Li. Jingjing, in a fit of rage, slaps Xanther. She falls to the ground, and Anwar is poised to retaliate. Then the narrative freezes . . . and bends. Things go sideways with unexpected results.

The second pivotal meeting takes place in upstate New York. Cas and Bobby confront Recluse. Both camps came with their own retinue of heavily armed toughs. The meeting plays out less like a gangland meeting than a diplomatic summit. Stakes are high. Danielewski shows the event with laser sights punctuating the text like Christmas lights. He captures the simultaneous beauty and dread of the meet. Recluse wants the Orb back and he declares he has the best of intentions. Most villains use the same punchline on the credulous. Cas and Bobby refuse. Then things happen.

Finally, Özgür the Turkish-American LAPD detective, responds to a call of a firebombing. In this case he comes face to face with Shnorhk, the Armenian-American taxi driver. He cries “Lists!” to the cops on duty.

Shnorhk thinks to himself, “Asks then for Shnorhk’s name as if just a name could satisfy a Turk. Such a Turk as this wants whatever Shnorhk have.” The lists Shnorhk cries about were Mnatsagan’s names he collected for an academic project on the Armenian Genocide. Not only characters die in Redwood.

During this tragedy Özgür ruminates on celebrity in American culture. In an earlier time the house fire would be front page news. Social media has changed age-old presumptions. The lack of TV helicopters has him think, “Maybe some celebrity-driven drama is going on elsewhere, drawing media and PeSTs away.

But if Özgür’s theory is right, that the number of people at an event indexes the level of power, then some reality star’s escape from rehab exceeds in influence commonplace violence like this, meaning in the future some Twitter star could end up president.” (Note: the time stamp for this chapter is September 10, 2014.) Earlier volumes charted Xanther as a viral video star in her confrontation with the mountain lion. In addition, girls throughout California and Mexico are wearing faux kittens on their shoulder a la Xanther. Curiouser and curiouser.

Beneath this roiling mass of interwoven narratives is a profound meditation on language. To be more specific, the limitations of language to describe. Whenever the name for “the little one” is mentioned, it is redacted like a CIA memo.

Numerous characters wrestle with language. Astair in her parentheses-laden paragraphs, hemming and hawing, a caricature of politically correct ambivalence. Jingjing’s pidgin English peppered with Indonesian and Chinese is reflected in Shnorhk’s “broken English.” Luther’s streetwise gangbanger Spanglish echoes back on Cas and Bobby’s hacker lingo, each using their own jargon in their respective criminal subculture.

Redwood is the culmination of one epic narrative adventure. Will the upcoming volume reset the parameters or send the series off in newer, stranger directions? For all its typographical eccentricities and visual flourish, Mark Z. Danielewski has created a series every bit as addictive as other more traditional franchises. The melding of lowlife criminality with high-tech international intrigue and enigmatic magic makes for a multifaceted franchise. If William Gibson, Michael Connelly, and Neil Gaiman wrote a series, it might end up looking like The Familiar.