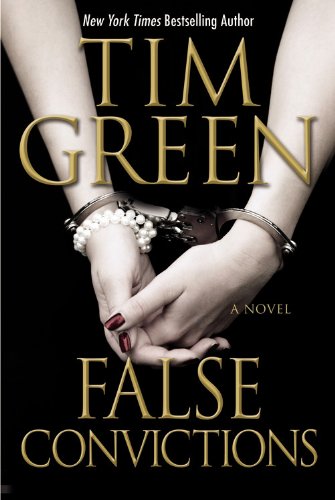 “Even in the suit, (Judge) Hubbard’s thick neck and big glasses gave him the air of a character actor playing a bit part on a low-budget cable movie.  Jesse Jackson kicked into gear with kisses, solemn hugs and jive handshakes.”

This reviewer was expecting something more substantial than what is found in Tim Green’s latest legal novel.   This is not a courtroom drama in the style of Scott Turow or an exciting part real, part fantasy novel like those written by John Grisham.   No, instead it comes off as simultaneously low-budget and overdone.

The three main characters are stereotypes, none of them quite believable.   One is a young and brilliant shark of a lawyer, Casey, who, naturally, makes men melt at the sight of her in short skirts.   Another is a young male reporter who is God’s gift to women and knows that he’s more beautiful than Casey.   And lastly there’s the billionaire who has brought them together for the purpose of serving justice.   This is a guy who can drop $2 million in one afternoon in order to have Brad Pitt, Al Gore, and Jesse Jackson join him at a press conference.   He also happens to move about in the fastest non-military plane known to the world.

Stop me if you’ve heard this plot before.   A highly attractive young white woman is raped and savagely murdered.   The law enforcement authorities decide to arrest a young black man for the crime, and he’s sentenced to prison for the rest of his life.   Only maybe he didn’t do it.

In order to rectify injustices like this, our friendly billionaire establishes a project to give sight to the blinded Lady Justice.   He offers Casey, who is so incredibly successful that she’s already been the subject of a TV movie, a cool $1 million retainer to take on the defense of only two wrongly-convicted persons.   The billionaire may be Batman, but he needs lawyers like Casey to serve as Robin.

The typical reader is going to expect a lot of twists and turns before things are resolved and the wrongly-convicted person is freed.   Except that everything falls into place too quickly and about sixty-five percent of the way through this novel, the innocent guy is freed while one Judge Hubbard hangs out with Al Gore, Brad, and Jesse.   Wait a second, there are too many pages left for this to be the end, which means . . .

Yes, the old fly-in-the-ointment event occurs and everything suddenly goes to heck in a hand basket.   The best laid plans of billionaires go awry.   The same goes for the plot of this novel.   It goes into overtime before the game has been played out.

If Green had stopped when all the loose ends were tied, he might have been credited with serving up a nice little novella.   But this one goes on a bit too long and, strangely enough, it’s hard to spot the author’s legal training in the telling.

The reader seeking a fun novella in this genre might like Denis Johnson’s campy Nobody Move, just released in trade paperback form.   Or novels like Try Fear or Try Darkness by the highly talented James Scott Bell.   And then there’s True Blue by David Baldacci.   All of these are rides in a fastback mid-engine Porsche compared to Green’s tale, which felt to this reviewer like a ride down the block on a Vespa.

Reviewer Joseph Arellano has a background in law.   He managed the California Career Criminal Prosecution Program and taught in the Criminal Justice Department at California State University, California.  He also worked for the state Department of Corrections.   His reviews have appeared in several publications including San Francisco Book Review.