Fallout: The Hiroshima Cover-up and the Reporter Who Revealed It to the World 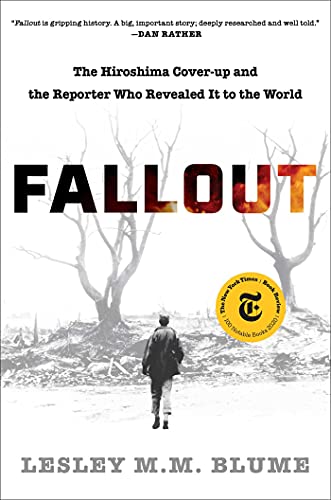 “At exactly fifteen minutes past eight in the morning, on August 6, 1945, at the moment when the atomic bomb flashed above Hiroshima, Miss Toshiko Sasaki, a clerk in the personnel department of the East Asia Tin Works, had just sat down at her place in the plant office and was turning her head to speak to the girl at the next desk.”

So begins war correspondent John Hersey’s reporting of what actually happened to civilians the moment a “noiseless flash” was detonated over Hiroshima and the world changed forever.

Now, on the 75th observance of that horrific event, award-winning journalist Lesley M.M. Blume’s tells the story behind Hersey getting the story in Fallout. Miss Sasaki was one of six protagonists Hersey followed for two weeks at the first nuclear ground zero and his account of what they went through and witnessed exposed the realities of nuclear warfare. Although the figure will never be known, between 100,000 to 280,000 people eventually perished that morning and in the year following the blasts many bodies were unearthed under the decimated city.

That Hersey was able to get into Japan as an independent journalist outside of the military’s sanctioned (and censored) press corps, is a remarkable story of fearless journalism. In just two weeks Hersey interviewed and took down testimonies (in shorthand) of six survivors to report what happened to them, and the carnage they witnessed as they somehow survived their injuries in the days following.

First published as a 30,000-word article in the New Yorker, a year after it then appeared in book form that riveted readers around the world. So powerful was Hersey’s text, it came to define nuclear warfare as the penultimate threat to the planet, and the US mission unconscionable act of mass genocide.

It contradicted what US officials were trying to downplay about the cost in human lives and what they were learning about the lingering effects of radiation poisoning in humans. One US official even described it as “a rather pleasant way to die.”

Blume's portrait of Hersey weaves through the book. He was an American born in China, the son of Quaker missionaries. He fought at Guadalcanal and was a stellar war correspondent reporting from the front lines in Europe during WWII.

Hersey won the Pulitzer Prize for his book A Bell for Amado but didn’t rest on any laurels. He quit reporting for TIME magazine because of their editorial strictures. He was scouted by the New Yorker founding publisher Harold Ross, who realized that news organizations were not covering important stories during the war. Ross and story editor William Shawn rebranded the magazine from being an artsy cosmopolitan magazine to a harder-hitting news-based publication.

Ross and Shawn kept the story top secret from the government and even within the offices of the New Yorker. Hersey defied US censorship and subverted the government, military, and even the scientists of the Manhattan Project to tell a human story of Hiroshima that was so powerful that it defined the international world view of the grotesque immorality at the notion of using nuclear weapons.

As Blume reveals, Pacific theater commander General Douglas MacArthur was kept in the dark of The Manhattan Project nuclear attack missions in the Pacific and was in effect humiliated that his strategies had not yet defeated Japan after Hitler’s defeat and the Allies’ liberation of Europe. MacArthur had his vain reasons for wanting to suppress all of the official reporting in the aftermath of the bombings.

Blume condenses a lot of military, government, and behind the scenes news business history over this most momentous event in world history. It is a brilliantly conceived and impeccably researched book.

Hiroshima remains not only a literary milestone but as relevant as ever as nuclear threats are more threatening as authoritarian leaders around the world, as well on 1600 Pennsylvania, play their apocalyptic war games. Again.

Fallout should sit next to it on the shelf as a testament of the courage of a free press to report the truth no matter who attempts to silence their mission.