Fallen Glory: The Lives and Deaths of History's Greatest Buildings 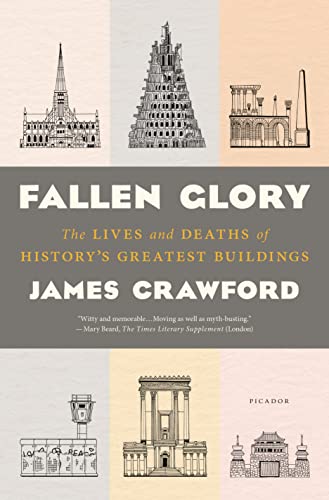 As with all things, living or not, everything is born, reproduces, and then dies to return to the greater from which all comes. The manmade is no different.

James Crawford in Fallen Glory argues that much is learned from the history of human made structures, if that legacy is preserved. The last part is the great issue. Much of the record and the remains are disappearing.

That last idea may be lost on readers who will enjoy this work only as an armchair adventure to see great wonders of the world. It is the work of a talented storyteller who takes the reader on a grand expedition.

The author analyzes the meanings of places such as Amarna, the Bastille, the Hippodrome of Constantinople, and the Museium of Alexandria. Some of the exotic of India, the Mongols, and the Muslim Spain is also included.

The subtitle is deceptive, however. Collected here is not all of History’s Greatest Buildings but an arbitrary selection. The world is just too big. It is an enormous open air museum of amazing manmade constructs from which to pick and choose.

Almost nothing appears in this book of the Far East, for example, but that study alone would make a thick volume. The author therefore discusses the Berlin Wall but not the meanings of the Great Wall of China or Great Zimbabwe of East Africa.

Many such places could have been mentioned, at least in reference to what has been lost. Modern Washington, DC, with its Library of Congress, Smithsonian, etc. would therefore make a good comparison to the Library of Ancient Alexandria.

Analysis here is not limited to history, metaphor, myth, and ruins. Meaning in rediscovery is also discussed here such as with Hiram Bingham and the Inca.

Fallen Glory, however, requires slow careful reading, to fully appreciate its irony that provides its greatest gems. It is a story of the ethnic cleansing of humanity as a whole, the dark opposite of whatever good comes from globalization.

Antiquities and records are stolen or destroyed, buildings are demolished. The result is to wipe clean the past that makes up the present, creating a future dehumanized for having no roots in its creation.

One of Crawford's examples of such true crimes against humanity begins with the destruction of World Trade Towers. Out of that event came a war where the Iraqi national museum was looted for commerce in antiquities—about dollar value not knowledge.

Near that looted museum Saddam Hussein had built replicas of Babylon's glory although "archaeological accuracy was of little importance to him—only the symbolism remained." The Tower of Babel could even have been a Hebrew metaphor for Babylon’s great ziggurat.

That structure, in turn, was the product of the Nebuchadnezzar who destroyed Jerusalem and its famed temple. His institutionalized ethnic cleansing created the Jews who, ironically, would consequently preserve their past and Great Temple in the Old Testament, spurring modern archaeology and documentary scholarship.

Similarly, at Capitoline Hill in Rome one could be either or both be executed or made emperor. Among the symbols of the empire's beginning, justice, power, vice, and virtue, "regardless of honors greatness achieved in the course of a life, a man's ruin could be swift and merciless."

Crawford sometimes fails to clearly differentiate between established fact, legend, and myth. Maybe, as with the literary truth in the ancient world, that does not really matter.

The manmade can have beauty as a combination of its humanity, legend, popular myth, ruin, and truth. The author writes of all of these places that "it is nature-versus-nurture debate in stone, steel, glass and structure."

A large portion of the last of the book warns of the dangers losing our physical reminders of our past, in paper and stone, vanishing. He asks "are buildings extensions of us . . . or are we extensions of them?" No truer history exists in practice and end product.