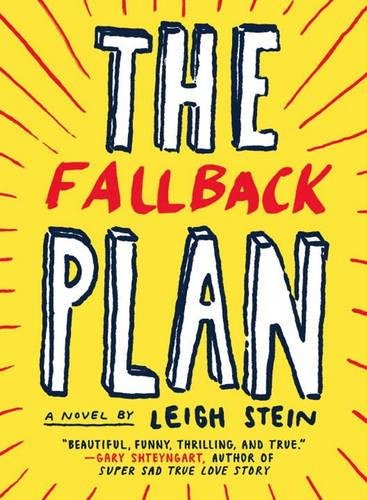 “Leigh Stein’s debut successfully captures the purgatory between childhood and becoming an adult. What begins as childish regression ends as a bittersweet, nostalgic remembrance of a time when things were just a bit easier, a time before the stark realization that crossing the line into adulthood was a much bigger step than we ever anticipated.”

Esther Kohl has just graduated from Northwestern with a degree in theater and no clue of what to do with her life. Her parents had every hope that Esther would somehow find her way—even going so far as to turn her bedroom into a home theater—but the only way Esther found was the one leading back home.

Instead of focusing on getting a job, Esther daydreams about contracting a fairly mild, yet curable disease that would allow for the collection of disability and time to read her favorite childhood books.

Despite being a college grad, Esther has hit a developmental stalemate. Instead of embracing an older, more mature persona, she reverts back to her former high-school self in both mannerisms and habits that include hanging out with her friend Pickle and his slovenly friend Jack.

Despite never having had a boyfriend, Esther finds herself attracted to Jack’s pseudo bad-boy image, despite the fact that he’s dating the shrewish Jocelyn—a relationship that is the very definition of dysfunction, but maintained with a steadfast loyalty to conviction.

Esther’s parents vacillate between fostering her regression by coddling her and fearing that their only child will live with them forever.

Nate and Amy Brown are a couple in mid-marital implosion due to the recent death of their second child. A wonderful mother to their daughter May, Amy, is the poster-child for a woman on the precipice of a mental breakdown. Nate is a man at the end of his rope and in a final desperate act hires Esther as a nanny for May so Amy can return to her “art;” however, what was once the product of a creative mind has become a dark representation of the demons that now inhabit the space.

With well-structured, perfectly suited prose, Ms. Stein captures the stubborn resistance to the loss of innocence and the feeling of inept vulnerability. In between coverage of fairly heavy themes, Ms. Stein lightens the mood with creatively witty insights such as: “Whole Foods smells the way baby kittens would smell if they were beaten to death with patchouli by a motorcycle gang.”

Although the story originally feels immature and Esther comes off as emotionally stunted and pathetic at times, it’s not long before the true, underlying premise beings to take shape. In short, you don’t have to be lost and undecided to relate to someone who is—we’ve all been there or at least cared about someone who has.

Leigh Stein’s debut successfully captures the purgatory between childhood and becoming an adult. What begins as childish regression ends as a bittersweet, nostalgic remembrance of a time when things were just a bit easier, a time before the stark realization that crossing the line into adulthood was a much bigger step than we ever anticipated.