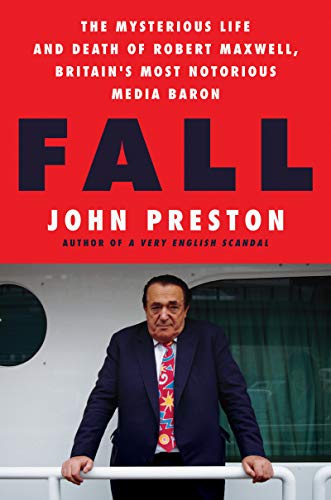 The “mystery” in the subtitle of this compelling biography of the media mogul, Robert Maxwell, is how and why his big body was found floating face up in the waters of the Atlantic Ocean, not far from his yacht. Was it murder, suicide, or a deadly accident?

Biographer John Preston, the author of A Very English Scandal and The Dig, leaves it to readers to decide how Maxwell spent his last hours on May 29, 1970. After all these years, his death is still a mystery and intriguing. So is his whole life, which Preston explores with aplomb and with a nose for news—not surprising, since for years he worked at the Sunday Telegraph in London

Preston leaves no stone unturned. Along the way, he collects a wealth of scandalous stories about the man who was born Ján Ludvík Hyman Binyamin Hoch in 1923 in what was then called Czechoslovakia. Over the next four decades, Mr. Hoch changed his name and his identity many times, even becoming a member of the British Parliament.

As Robert Maxwell, he built a global publishing empire and became a multi-multi-millionaire who cozied up to the likes of Margaret Thatcher and Mikhail Gorbachev. Having survived the terrors of Fascism and the upheavals of World War II, he was ready for everything and anything. Except perhaps his own demons.

A veritable self-made man, Robert Maxwell, rose from rags to riches, ate compulsively, wiretapped his employees, and romanced women half his age. He was also, Preston shows, a crook and a “fraudster” who raided the pension funds of his own companies and engaged in unethical and probably illegal financial operations. His sons, Ian and Kevin, were tried for conspiracy to defraud a year after their father’s death.

Maxwell’s life is the stuff of legends. It provided the inspiration for Richard Armstrong, in Jeffrey Archer’s 1996 novel The Fourth Estate and for Eliot Carver in the 1997 James Bond film, Tomorrow Never Dies.

Maxwell turned his media empire into an enterprise for the benefit of the wealthy and the powerful. He had links to the KGB, to the British Intelligence Service, and to the Mossad, the Israeli spy network. For a time, Maxwell denied the fact that he was Jewish. But he gradually returned to the faith of his parents, became an Orthodox Jew, and was buried in a ceremony in Israel befitting a president or a prime minister.

Preston understands that the name “Robert Maxwell” will not ring many bells today. He also knows that Maxwell’s youngest daughter, Ghislaine, who was once a friend and lover of Jeffrey Epstein, does ring bells.

Ghislaine and Epstein show up in the closing pages of Fall. For those who don’t remember, or who need reminding, Epstein was arrested for sex trafficking of minors and soliciting a minor for prostitution.

Ghislaine has denied allegations that she procured teenage girls to have sex with Epstein, who committed suicide in 2019 in his prison cell at Manhattan’s Metropolitan Correctional Center.

The more one learns about Maxwell and his family the more sordid the picture becomes, though his widow Betty seems saintly. Preston puts all the information down on paper and doesn’t flinch.

He includes a conversation between Rupert Murdoch, Maxwell’s arch-rival, and Clive Carr, a British wheeler-dealer. “Maxwell’s an evil man,” Carr tells Murdoch who replies “Well, I’m not an evil man.”

Preston traces the fascinating relationship between Maxwell and Murdoch, who comes out smelling much less foul than his adversary.

Readers of Fall might be reminded of Orson Welles’ cinematic masterpiece, Citizen Kane, which was based on the life and the legend of newspaper tycoon, William Randolph Hearst. One might call the subject of this biography, Citizen Maxwell.

At the height of his career, he was more powerful and with a bigger global reach than Hearst. Indeed, Maxwell tried to influence the course of the Cold War, East West relations and the role of Israel in the Arab world.

Preston doesn’t make Maxwell into a likeable person, but his biography shows how important the mass media—“the Fourth Estate”—was throughout the 20th century.

According to Preston, Donald Trump boarded Maxwell’s yacht, Lady Ghislaine, at least once and was “in awe” of the décor, which one visitor described as “1970s Playboy Baroque.” Like Trump, Maxwell was flamboyant and largely irrepressible. Like Trump, he dished out “fake news” at two of the newspapers he owned and mismanaged: The Daily News in New York and The Daily Mirror in London.

Too bad Maxwell didn’t live long enough to witness some real big news: Trump’s electoral defeat in 2020. He would not have been surprised. He had been through too much in his own stormy life to be blindsided, except on that fateful day, May 29, 1970, when he died in the waters of the Atlantic Ocean.