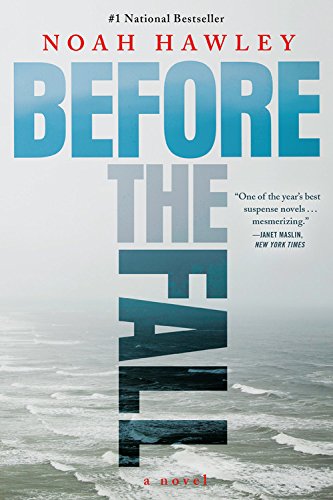 “Readers may be moved to stand up and cheer.”

You can’t go wrong with a story about a plane crash. Few things are as morbidly fascinating in their own right; and crafting a novel around one creates an irresistible draw.

Noah Hawley follows through with a literary thriller built around the disaster. The book would be more appropriately titled Profiles in Courage or David and Goliath because it pits an insignificant man against the two most powerful forces in the world: Mother Nature and Father Greed.

Without this man, who defies all odds by swimming, injured, out of the wreckage with a four-year-old boy on his back, the novel would be just another story about unscrupulous people with too much money doing unscrupulous things—and the collateral damage that results.

Instead we get a thoughtful and compelling page-turner. At its simplest, it’s the story of the plane crash, what leads up to it, and what happens after. It’s told in jumbled chronological order, starting with the crash then its aftermath, interwoven with the backstories of all the people involved. The story gets dirtier and scarier with each turn of the page.

Against all those unscrupulous people stands Scott, an artist once a rising star and now a has-been. At one point in his past, he gave up and became a drunk. But a combination of adversity and an unquenchable spark of spirit reminded him of his boyhood inspiration, Jack LaLanne, who showed the power of will over the body during a demonstration of extreme endurance. Emulating LaLanne gave Scott physical and moral courage and drove him to become a swimmer. This saves his life decades later when the private jet he’s been offered a ride on crashes into the sea.

Hawley’s writing is taut and clear, his characters richly developed. The story presents today’s America in its chilliest guise beneath the veneer of modern civilization. Perhaps the most evil of the forces at play is the media, personified by a sensation-mongering TV news host. He does his best to twist reality and ruin lives for the sake of viewer count, in a way recognizable to most observant people. The company that encourages him to behave so foully happens to be owned by one of the crash victims, bringing the story full circle.

The narrative point of view shifts among Scott, the sleazy TV news host (or transcriptions of his show), and the lead crash investigator, with lesser focus on family members connected to the crash victims and survivors. Each of their stories revolves around the crash in an ominous, you-can’t-escape-fate way.

But Scott refuses to bow to fate’s inevitability. In order to break the endless torment of the crash and move on in life, he must confront the people trying to take advantage of him and the boy he rescues, along with the boy’s only relative. The honesty and guts Scott shows make him not only a hero of the plane crash, but also a hero of our times. Readers may be moved to stand up and cheer.