Facing Ted Williams: Players from the Golden Age of Baseball Recall the Greatest Hitter Who Ever Lived 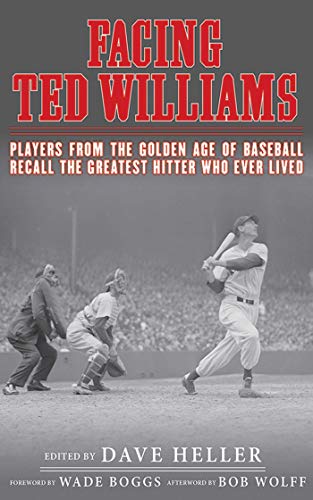 It’s no surprise this celebration of Ted Williams is released on the Opening Day for Major League Baseball. Now fans have two reasons to celebrate on April 1.

Stories about The Splendid Splinter (last man to hit .400 in a single season, a 19-time All Star, a two-time MVP and Triple Crown award winner, and member of National Baseball Hall of Fame) may be plentiful. But here you hear from lots of players—both ones you know of (Bob Feller, Don Larsen) and those you may not (Ned Garver, Mudcat Grant)—about their colleague, Ted Williams.

The pitchers are introduced by their career stats against Williams. But the soul of Facing Ted Williams is the stories, and those, like the sweet swing of a Ted Williams home run, are delightfully satisfying.

There are some things every player agrees on: He had great eyesight (reportedly when he entered the Marines as a pilot in World War II the ophthalmologist said his vision was on the order of a “1 in 100,000 occurrence.”). Williams admitted to 20/10 vision, meaning he could see from 20 feet away what normal-sighted people could see from 10 feet away.

And he didn’t swing at anything that wasn’t a strike.

He had a phenomenal memory: He knew if he had you “in his book”—meaning he had hit a home run off you—with details of what pitches each pitcher threw him. He knew he was a star, and lots of players talk about how dazzled they were when he acknowledged them.

Of course, sometimes that can backfire.

Catcher Bob Oldis tells a story about when he was a rookie Williams casually stopped him on the field and wished him good luck and a successful career. Then he asked him asking about a new pitcher Pedro Ramos:

Looks good, what’s he got? Oldis says good fastball, hard curve (now a slider) and good control. As Oldis trotted back into the dugout, some teammates asked what the two were talking about. Oldis repeated the conversation, and they said, See, he already got a scouting report on Ramos.

“Well, I didn’t even take a sign. Frank House was my catcher. I just got the ball back and went into my stretch. You need to understand Ted hardly ever swung at a ball that wasn’t a strike So I come up and throw the ball at a pretty good speed up about shoulder high on the inside part of the plate. As I didn’t have a sign with my catcher, he didn’t know what I was going to make a pitch out, but I didn’t want to throw the ball to the backstop. I just threw it in there plenty bad and Williams stepped back and hit that sucker for a home run.”

One time during the Yankees he had a couple of home runs off the Yankee pitcher and Yogi (Berra) complained because he called ball four on him. And the umpire said “Well at least I held him to one base.”

He remembers Ted bunted once against his team and laughed all the way down to first base.

He says Ted was kind enough to sign a photo: To Mudcat, thanks for helping me (get) in the Hall of Fame.

In a runaway ball game Kerby Ferrell was the manager and Gray calls him an absolute dunce. Ferrell asks Gray to go back into the game. Gray says, “We weren’t the prima donnas like they are today.”

Ted comes up and the catcher calls for a fastball; Gray keeps shaking him off. He knows no one can throw a fastball by Williams, but the catcher keeps calling for it because that’s what the manger is telling him. All of a sudden Gray puts his hand straight up in the air and shakes it in the middle of the stadium:

“Ferrell comes running out of the dugout “What’s wrong, what’s wrong.” Well. I said “To tell you the truth, I think my catcher’s blind. I’ve been shaking him off down here and he didn’t see it, so I thought if I stuck my hand way up in the air he might be able to see I was shaking off the pitch.”

Ferrell leaves, Gray throws the fastball, and then says “I’ve never seen a ball hit that far or that high in my life.”

And he swears that the only fastball he ever threw him over the plate.

When rookie Tom Qualters (RHP 1953–1958), 1 for 2 was nervous about pitching to Williams he got some great advice from Satchel Paige. “Them sons of bitches can beat you, but they can’t eat you.”