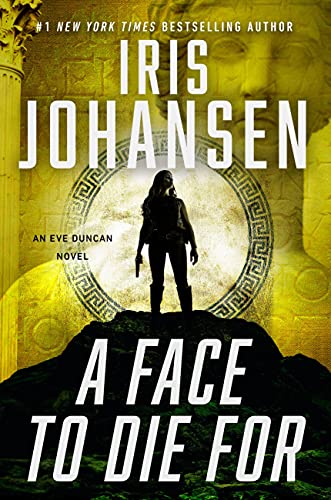 “A Face to Die For is primarily a well-structured story with lots of action. Iris Johansen fans will enjoy it.”

Johansen’s new novel, A Face to Die For: An Eve Duncan Novel is a bit misleading in its title. Johansen has penned countless stories with Eve as her heroine, but in this story, that is not quite who we see as lead heroine.

Meet Riley Smith. When the story opens, Riley is an eight-year-old child on an archeological hunt with her parents.

Her father, Professor Smith, is focused on one goal: proving that Helen of Troy was not a figment of Homer’s imagination in the Iliad but a woman who truly existed and was considered the most beautiful woman in the world.

His search for Helen and her treasure is not a well-kept secret, and one man is determined that he shall have her and her treasure—Dakar. Johansen’s opening chapter is gripping in its revelation of Professor Smith’s murder and the theft of his notes on his search.

As she grows up, it doesn’t take much for Riley Smith to pick up her father’s passion and the ongoing search for Helen. But she realizes that she needs world-famous forensic sculptor, Eve Duncan, to reconstruct Helen’s face. Although Eve is not easily convinced of the reality of Riley’s passion, she is intrigued enough to join the hunt.

Enter Morgan Cade—a wealthy man whose life consists of doing right by the world. Cade is wealthy, he has a strong group of paramilitary fighters at his beck and call, and he is always one step ahead of Dakar but there are no scenes to show how he does this. It just occurs, and he saves the day. He and Riley become partners in the search for Helen. His focus is on Riley, whom he has fallen for, and while her goal is finding Helen, as the story progresses, she finds herself attracted to Cade.

In the meantime, Dakar is working in tandem with Madlock, the evil President of the United States. While Dakar’s goal is to find Riley and get Helen’s treasure (if it really exists), Madlock’s goal is to find Eve and learn from her the location of Diane Connor, the woman who was the first wife of Eve’s husband, Joe.

Diane has created a “silver bullet,”—a cure for all illnesses in the world. Eve admits to Riley that Madlock’s search for her is more than just finding the scientist. “Diane had done some additional work on both Joe and me when Joe was wounded. It was the only way to save Joe’s life.” Now, this can be a little confusing because Johansen does not provide any additional information as to what that “additional work” consisted of and why Eve was part of the procedure if Joe was the only one wounded. And one question remains unanswered: Is this something that was implanted in Eve and Joe and therefore Madlock wants Eve in order to discover the “silver bullet” secret? And let’s not rule out Madlock obtaining Diane’s work, thus giving him even more world power.

Madlock has been unable to find Diane; he is certain that Eve can lead him to her. Eve describes Madlock, “’He wants to own the world. Nothing is enough for him. But he’s wanted that formula for a long time and he’s narcissistic enough to believe that no one can really touch him.”

So Johansen has given the reader two protagonists, Riley and Cade; and two antagonists, Dakar and Madlock.

Riley is a well-developed three-dimensional character, strong, determined, and willful in her goals. At times she is annoying in that she demands to be the one who solves all the problems; however, this leads to some good conflict between her and Cade. Cade is also well-developed and a strong character in the story.

Dakar and Madlock are both sketchy characters with nasty habits, but otherwise the reader does not get a good sense of either.

While Eve is important to the story, she is a secondary character. Her husband, Joe, joins the group, and both men focus on keeping the women safe.

As the story progresses, the cave where Helen’s sarcophagus had been placed is found, and Eve begins to reconstruct Helen’s face. One does not get a sense of time here, because the final result appears quickly. Here Johansen does little to share with the reader exactly what made Helen the most beautiful woman in the world. There is some gasping of breath but not much more.

We learn that Dakar has been stalking Riley and Eve with the help of a mole in Cade’s group whom Dakar has bribed for information. This is great foreshadowing, leading the reader to wonder who the mole is: Dan, Riley’s unpredictable uncle; Kirby, Cade’s right-hand man; Novak, a CIA agent; or one of the others in Cade’s paramilitary group?

Eve, Joe, and Dan, Riley’s uncle, are secondary characters. For the most part well developed but not quite three-dimensional. Their roles in the story are to play second fiddle to Riley and Cade, respectively.

A Face to Die For is primarily a well-structured story with lots of action. Iris Johansen fans will enjoy it.