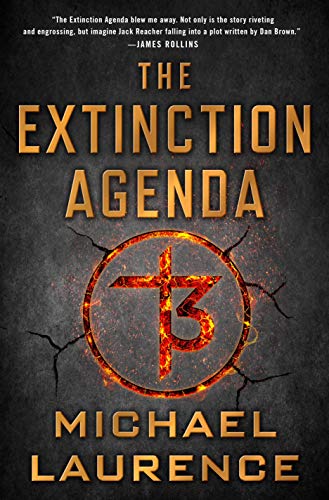 “An exciting page-turner that will keep a fan awake long past bedtime.”

A thriller in the tradition of Dan Brown and Steve Berry, The Extinction Agenda is guaranteed to scare the bejesus out of one as Michael Laurence unveils a conspiracy theory that feels all too true.

When Special Agent James Mason and other FBI agents, along with a strike force  from the Border Patrol, ATF, and DEA follow a trail of dead illegal immigrants across the Arizona desert to a building at an abandoned stone quarry on the O’odham Indian Reservation, they believe they have found human traffickers and drug dealers.

“Of the eighteen law-enforcement officers who had launched the attack . . . only five had survived.”

James Mason awakes in the hospital, badly injured but alive. A bureaucrat from the Secretary of Homeland Security delivers the news that the dead illegal immigrants found by the strike force were determined to have died from a virus. The dead hanging from chains inside the building had also died from the virus, but the explosion that killed most of the strike force also killed the virus.

“Thanks to our strike force, whatever contagion was inside that quarry never left the reservation . . . the country’s a safer place because of you.”

Mason is not so sure. “The men in that building . . . They knew we were coming. They could have easily smuggled the virus out through the open desert.”

The bureaucrat dismisses Mason’s fears, but that dismissal does nothing to reassure him. People might soon start dying from a virus with no known treatment or vaccine.

More than the threat of a pandemic leaves Mason uneasy. There is a mole either in the FBI or one of the other agencies; otherwise the strike force would not have been ambushed.

Mason is also grieved by the death of his supervisor and mentor, Spenser Kane, and he believes it is his fault. “He’d been in a position to save his partner’s life and he’d failed.”

The fact that whatever choice Mason made in that old building would likely not have saved Kane doesn’t give him any comfort. He should have shot the man with the unearthly blue eyes like Kane told him to, even though another man had a pistol pressed to Kane’s head. Mason is a good shot. Maybe he could have shot the man holding Kane hostage and still been able to kill the blue-eyed man.

Or maybe not. He would never know. But he could avenge his partner. He could hunt down the blue-eyed man and whoever was behind him. And he could find the traitor who betrayed the strike force.

Mason’s search leads him to six other fires involving the deaths of illegal immigrants. The trail leads from the stone quarry where so many of the strike force died straight to Saguache, Colorado. Besides the eight drug cartels he knows about, “He had discovered an unidentified ninth organization . . .”

Mason’s wife, Angie, is an IRS agent and devilish good one. While Mason kicks in doors and hunts men, Angie follows the money trail that supports the cartels. “Consider how much planning went into this . . . How deep your pockets would have to be not to miss fifteen million dollars.”

Mason has assets of his own, the first being Ramses Donovan, better known as Ramses the Great, and Mason’s best friend since childhood. “He existed on the fringes of society, in the shadows all people cast, servicing the baser needs everyone has, but would rather no one knew about.”

Ramses has a moral code, it’s just more elastic than the average person’s. “. . . when it came right down to it, his morals more closely resembled Mason’s than those of most of the agents with whom he worked.”

Ramses hears of a meeting in an old warehouse that he believes may involve the organization Mason is hunting. Mason arranges a raid, but once more walks into an ambush. Once more he is betrayed but not by Ramses.

Mason has become his job, and it is putting a strain on his marriage. Angie asks for a serious talk, but Mason keeps putting her off. Then it is too late. Angie and her supervisor, a federal attorney, are burned alive in at a seedy motel. Their intimate position at death leads law enforcement to suspect the two were lovers.

Mason is devastated. His grief for Angie is tangled up with questions about her real relationship with her supervisor. Had she been unfaithful? Mason doesn’t believe it. When he receives an anonymous note that says “IT WAS NOT AN ACCIDENT. I NEED YOUR HELP,” he begins a hunt for answers.

An examination of the video at the motel reveals that the blue-eyed man had followed Angie. Is Mason getting too close to the shadowy organization behind the importation of the virus? If so, why not kill him? Why kill Angie?

He hears from the person who left him the anonymous note; a fragile illegal immigrant tells Mason that Angela was tracking the financial operations of a company called Fairacre Ranch Surplus and Auction. Now his wife’s murder makes sense. It wasn’t his investigation that caught the blue-eyed man’s attention, it was Angie’s.

With the help of Ramses and his other good friend, Gunnar Backstrom, an IT genius, Mason begins the hunt for the organization that is trafficking not in humans, but pathogens. His obstacles are many and one in particular is physically impossible.

An exciting page-turner that will keep a fan awake long past bedtime. Although the plot requires one to suspend disbelief and accept the story as fact, there is an underlying logic that says the conspiracy might be happening right now with no one being aware. 9/11 was unbelievable, too. Until it happened in real time.