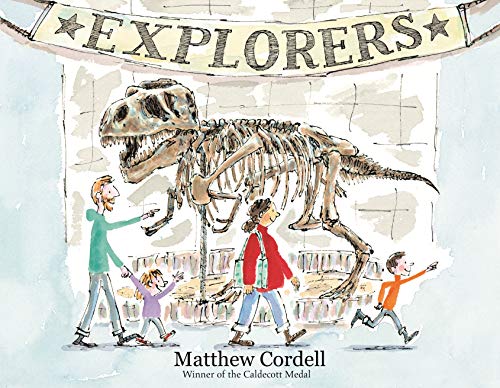 “Explorers has some charming attributes that wild imaginations will appreciate.”

In a wordless picture book, Explorers tells the visual story of a boy and his distracted chase while on an outing with his family to a Natural History museum. Not much of the museum is actually explored, or paid attention to, as the family runs around trying to track down where their son has run off to next.

In a prelude of sorts we see a boy in an orange sweater acquiring a flying whirligig toy resembling a dragonfly from a man who has pitched up a temporary magic stand next to a hot dog vendor presumably right outside the museum. The family (mother, father, little sister, big brother—in the orange sweater) grabs a quick snack, brother grabs the whirligig and they hop skip and jump up the grand stone steps into a classically Greek building, much like the British Museum in London, featuring a gigantic “Explorers” exhibition sign hanging high from the frieze.

Once inside, sibling discord takes over with sister wanting to go one way to the Butterfly Room, while brother and his whirligig head off impulsively in another. They choose to follow brother through the dinosaur displays, but this choice of direction seems totally random, not because of brother’s preference, but because the whirligig has flown there and the brother wants his toy back.

We chase orange-sweater-boy all through the dinosaurs without even stopping to look at them. Brother catches his flying creature near the knight’s armor display. Immediately the chase resumes through Egyptian Life, Ancient Greece, and China. Conflict occurs next to the Woolly Mammoth diorama when a boy from family number two catches the whirligig and orange-sweater-boy snatches it rudely away from him.

Family number two (father, son, and mother, daughter—both females ostensibly donning a hijab headscarf)—hang awkwardly to the side while father number one chastises orange-sweater-boy. The two families part ways, and we think nothing further of family number two while sister then grabs whirligig and tosses it off the balcony. Orange-sweater-boy freaks out and bolts down the stairs in yet another frenzied, panicked chase scene.

Wondering how the title made it to the short list, the choice of Explorers seems a bit ironic. What, exactly, was being explored? Not necessarily the museum exhibits. A quality family-time dynamic? Perhaps. A chance encounter with a family from a different culture? Maybe. The overstimulation of museums, crowds, and a toy that’s hard to control? Who knows. Will the two families continue to explore their new friendship outside of the museum interaction? Anything is possible. Without any words, it’s left to the reader to make their own personal interpretations.

Cordell’s illustrations are, well, so sorry to admit, rather typical. In the exact same vein as Quentin Blake, William Steig, and Suçie Stevenson, there is nothing distinguishing Cordell’s style. If anything it’s a little looser, sketchier, with less emphasis on clear composition. The illustrations are rough and seem rushed and unrefined, almost too messy. The path the whirligig takes is often lost in the surrounding scenes. It took a few readings of the book to realize that the whirligig was the focus of the plot. Cordell has, amazingly, won a Caldecott (2018) for one of his projects which was acclaimed to be “deceptively simple yet dramatic,” not quite how one would describe Explorers.

Parents will relate to the dynamic of being pulled in more than one direction in a stressful situation. It was the parents’ decision to allow the toy that caused all the chaos in the first place, which makes one wonder if Cordell’s original intention was to make parents “explore” the disruptive impact of permissive parenting! In any case, Explorers has some charming attributes that wild imaginations will appreciate.