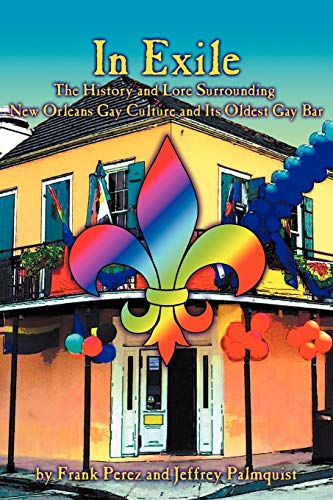 “In combining—as the authors admit that they do—the scholarly with the gossipy in one slim volume, the resultant work is an uncomfortable blend of loose, anecdotal history and academic text. Had the authors decided to stick with either one of these, the result would have been stronger. Had they decided to focus on the diverse voices of New Orleans, and the memories of the Café and forgotten the weak, stilted ‘scholarship’ that drags the narrative, In Exile would have had much to admire. As is, the book is a case of ‘neither nor’ and much as I might wish to offer praise, at best I can offer only an appreciation of the authors’ intent.”

While the book itself as a whole seems more targeted to the classroom and to students of gay and lesbian studies than to the casual reader, In Exile proves that, while not as noticeably or vocally a home to the gay rights movement as San Francisco or New York City, New Orleans has a long history of tolerance when it comes to the gay community, and has for just as long openly embraced gay culture.

As the authors report:

“Much has been written about the burgeoning gay communities in New York and San Francisco at the turn of the twentieth century, but the queers in New Orleans have been largely ignored among gay historians. Their closet remained quiet and crowded. Considering the fact there isn’t a lot of source material to work with and, to a lesser extent, the subtle anti-Southern bias in much of American historiography, the neglect of New Orleans in American gay history narratives is somewhat explainable, if regrettable.

“One thing New York, San Francisco, and New Orleans have in common is they are all ports of entry to the United States for international visitors and immigrants. As major ports, all three cities host large, transient populations. Gay historians have long noted the effect of such demographics on the gay community.”

From here, our authors sneer at Foucault, note Charles Kaiser’s belief, as stated in his own work, The Gay Metropolis, that the evolution of the gay community in America can be directly traced to World War II—a period in which, for the first time in history, a huge number of young men were exposed to the greater world around them—and then move on back down south, to the French Quarter in New Orleans, where in the shadowy interior of Café Lafitte, they begin to ply the reader with stories of gay life long ago, and of the founding of Café Lafitte:

“In 1933, Tommy Caplinger, Harold Bartell, and Mary Collins opened Café Lafitte. They were accepting of and welcoming to their gay clientele and offered them a safe place to drink and socialize. Although the bar could not be classified a “gay bar” as we think of the term today, it was as gay friendly as the times would permit. And, as one might suspect, it was a trendy nightspot. Robert Kinney mentions the bar in his classic 1942 book The Bachelor in New Orleans suggesting, ‘If the bartender is passed out, go behind the bar and mix your own drink!’”

It may be suggested that it comes as a warning sign when the quips quoted from other, earlier works are funnier than anything come up with by the authors themselves, most especially when dealing with a place as ripe with the far-fetched as is New Orleans. And this is not, in truth, the most vibrant book written on the topic of gay culture.

More specifically, this is a work dedicated to the examination and celebration of Café Lafitte itself, with all other aspects of gay culture in the city taking a backseat. So much is reported, so many legends examined, memories shared and tall tales told, that, after a while, the reader begins to feel that he knows the Café Lafitte so well that if he were to walk into the bar himself one day it would prove itself to be a “place where everybody knows your name.”

Most especially in that our authors report themselves to be a bartender and a barfly, both at the present-day Café Lafitte In Exile (the name change came with a change in owners, and not location—the bar is located today, as it has been since 1953, at 901 Bourbon Street), some of the book has the sense of “oral history” about it, with various elders of the New Orleans gay community sharing their memories of the bar, with the authors string these memories together and occasionally tossing their own into the mix. As the authors themselves define their book:

“As much as this book is about the history of gay New Orleans and the gay histories of gay New Orleanians, it is also a book about New Orleans herself. It is part reporting, part revealing, part investigating, part questioning. It is partly scholarly, partly gossipy. It is wholly a love letter, not only to the city but also to the gay men and women who contribute greatly to her complexity and beauty.”

And while noting the ebb and flow of the gay community from the early part of the 20th century until today, the authors do another thing as well, and treat the reader to the physical evolution of Café Lafitte.

Across the years the place gets its balcony (the location of the “quiet” bar), acquires and moves the notorious pool table, stays open through the whole of the Katrina catastrophe, and, somehow, sports an eternal flame:

“The story behind the eternal flame, like much of the history of the bar—indeed, New Orleans herself—is shrouded in mystery and mythology. One common story claims the fame is a memorial to the original regular crowd’s (and by extension, future generations of drinking gays) status as ‘exiles. . . .’ It makes for a nice story. In the early years, the flame also served as a fountain but that function ceased when drunken barflies began using it as a urinal. A later owner of the bar declared the flame was a tribute to arson—arson that enabled him and his lover to buy Café Lafitte’s. The story goes that they set fire to their former business in another state and used the insurance money to buy Lafitte’s.”

Throughout, In Exile unabashedly introduces the reader to eccentric characters (“If anything, New Orleans is a town of characters. Some eccentric, some criminal, some crazy, many all three or some combination thereof. All colorful. All revered.”)—and so the reader is comes to know to Café owner Tommy Hopkins, as well as to gay photographer Leonard Earl Johnson, who created signage for a mythical bar, the Adonis, for an art show, only to have crowds of gay men show up and insist that they remembered the place in great detail, to the gay Santa Claus, who today strolls the streets of the French Quarter in full Santa drag, to some very famous names who passed through the doorway to the Café Lafitte along the way, as in this moment, in which a patron named Albert speaks:

“One evening I saw Truman Capote sitting at the bar talking with someone. I approached him and said, ‘I don’t mean to come on to you but I’ve always admired your work. My I buy you a drink?’ And he responded, ‘Only if you sit and have one with us.’ He was so sweet, not at all bitchy like some have said. He even signed a beverage napkin for me. Another time I saw Tennessee Williams standing by the flame. As I neared him I could see he was very, very drunk but I introduced myself anyway. He gave me a very limp handshake, like a dead fish, and mumbled something incoherently, which kind of grossed me out, and almost fell down in the process.”

Like Albert, the reader soon learns that, in reading In Exile, sometimes he will be surprised by kindness and charm, other times by dead fish.

In combining—as the authors admit that they do—the scholarly with the gossipy in one slim volume, the resultant work is an uncomfortable blend of loose, anecdotal history and academic text.

Had the authors decided to stick with either one of these, the result would have been stronger. Had they decided to focus on the diverse voices of New Orleans, and the memories of the Café and forgotten the weak, stilted “scholarship” that drags the narrative, In Exile would have had much to admire. As is, the book is a case of “neither nor” and much as I might wish to offer praise, at best I can offer only an appreciation of the authors’ intent.