Everybody Knows: A Novel 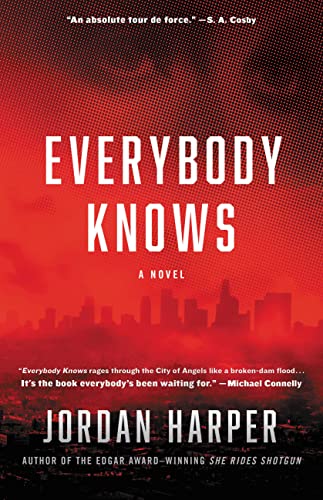 “Jordan Harper is the next wave in Los Angeles noir, and Everybody Knows is the novel that kicks down the door . . .”

Mae Pruett is a black-bag publicist, the one they send in when a celebrity or politician bottoms out and someone needs to clean up the mess with the media or police and make it all go away.

When her mentor Dan Hennigan is murdered right before a meeting in which he was about to share with Mae an off-the-books opportunity to cash in on something big, she suddenly finds herself submerged in the very world she’d manipulated as part of her job. Now, however, the violence and fear and murders are all linked to her personally, and she’s on the run, not certain if she’ll survive.

When a pregnant 14-year-old wanna-be provides her with a shot at redemption, Mae enlists the help of an old friend, former cop and current fist-for-hire Chris Tamburro. Together they chase down the leads, but they soon realize that Dan’s murder was just the tip of the iceberg, that they’re actually very small fish in a very large pond, and their lives are worth nothing to the people trying to snuff them out.

Everybody Knows is the latest crime novel from Jordan Harper, whose debut She Rides Shotgun (2018) won the Edgar Award for best first novel and nominations for an Anthony, a Barry, and a Macavity.

Harper’s Los Angeles noir feels fresh and original, and it starts with the characters. Mae and Chris are great protagonists—motivated by fear and excitement, dread and anticipation, and an unhealthy mixture of good and bad.

“When Mae looks at people,” the narrator tells us, “all she sees are secrets.” Her mantra, “Nobody talks but everybody whispers,” has been the wedge she’s used to pry open closed doors. She’s been good at her job, but apparently not good enough, because now she’s finding herself out-maneuvered at every turn.

Where Mae’s attention is constantly externalized, Chris’s world is very internalized. With the build of an offensive lineman, which he used whenever he felt like it as a sergeant with the sheriff’s department before they tossed him out, he now earns a living as an enforcer. However, he found himself an out-of-the-way apartment in Koreatown to spend his off time because “he likes living someplace where he is an outsider. It feels honest to him.”

Harper’s prose is snappy and urgent. Los Angeles is oppressive and ominous, a perfect noir backdrop to the murders and violence that trail after Mae and Chris as they work their way through the secrets that gradually reveal themselves.

His plot is somewhat dense, and at times is a bit difficult to follow. Nevertheless, Harper’s an excellent writer, and when he dips into resonant imagery that causes his characters—Chris in particular—to look around in dismay and sadness at the world in which they live, we know we’ve found a keeper.

Jordan Harper is the next wave in Los Angeles noir, and Everybody Knows is the novel that kicks down the door and pulls us into new territory, where noir is no longer a parody or a slave to the conventions of the past but dares to offer fresh new insight into the darkness of the modern world.