The Every: A novel 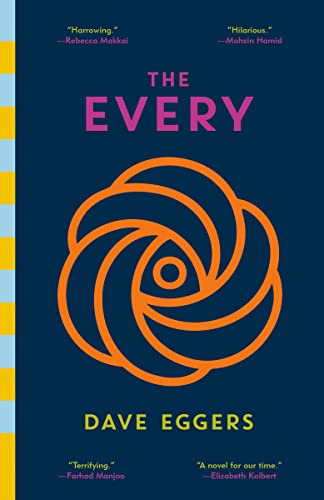 Dave Eggers’ 2013 dystopian satire, The Circle, imagined a Google-cum-Facebook corporation, the Circle, bullying a tech-dazzled world into embracing its own servitude. A paranoiac efficiency—bolstered by surveillance cameras and relentless online shaming—allowed the Circle to overawe the masses, while the company’s employees congratulated themselves within the safety of their gated campus.

As The Circle concluded, we were meant to understand that resistance isn’t merely futile—it lacks all meaning when a tech monopoly, invoking “choice” and “freedom,” obliterates these very notions. Could things get any worse? Apparently. Behold The Every, in which Eggers concocts an Amazon/Circle merger—the Every of the title—and invites readers to join him in outraged stupefaction at just how much we’ve ceded to our tech overlords.

The novel spotlights Delaney Wells, a 32-year-old former forest ranger who, in an improbable career change, resolves to earn employment at the Every and “end [it], finish its malignant reign on Earth . . . [her] purpose in joining the Every was to kill it.” Instead, once she’s hired, each absurd proposal she offers is enthusiastically received (and, ultimately, lucrative), thus making the Every even more inescapable. “There is no cliff,” Delaney comes to realize, no technology or pursuit self-destructive enough to constrain the company.

Delaney’s primary brainstorm is AuthentiFriend, a sort of digital lie-detector that allows users to assess the sincerity of their online contacts. As with much of the imagined technology in the novel, AuthentiFriend is scary, alluring, and just real enough to be both comic and repellent. Eggers is good at this sort of thing, positing, for instance, an app that predicts when you will die, another that allows individuals to compare the quality of their orgasms, and another that determines a person’s weight by examining their online images. Some of these might already exist. Eggers has a basketful.

Funny, too, and equally discomfiting, are the self-assured inanities the so-called Everyones spew as they jockey to roll-out the next breakthrough innovation: “(I)f we’re going to really address depression among young people, we absolutely must keep them on their phones as much as humanly possible,” or “It’s a relief not to have to think.” We laugh even as we recognize the logic at play; at some level, Eggers suggests, the nightmare has already arrived: we’ve endorsed convenience and efficiency, and, in the process, defiled our world. “(I)t’s my vow,” an Every exec announces, heartening the company’s stockholders while, presumably, unsettling Eggers’ readers, “to eliminate every last shadow on this planet . . . [we will pursue] safety through transparency.”

The pretensions and self-importance of certain Silicon Valley “innovators” is almost too easy to parody, however, and it’s in this regard that the book’s register becomes both unsteady and something of a retread of the chidings in Eggers’ earlier book. The piety and self-regard of the Everyones is dialed so high, and Eggers’ scorn is so extreme, instead of characters we get caricatures who sink beneath novelistic concern. The Everyones are so cowed and witless, it’s impossible to picture them getting any work done, much less manipulating—and ruining—the world.

More problematic is that Eggers’ relentless instinct to skewer undercuts the very real menace he means to address. What’s truly scary are the ruthless calculations of companies who urge us to optimize and connect and purchase. What Eggers gives us instead are Everyones who are implausibly outsmarted by inhabitants of a homeless camp and then waste hours posturing over a planned seal-watching trip. It’s all chuckle-inducing, no doubt, but it’s a type of satire blanched of nuance. We laugh at the idiots—and yet these people are also the shrewd tacticians making deadly-serious assaults on our wallets and minds?

A reader might reasonably surmise Eggers is more concerned with editorializing than telling a story. A passing mention of climate disasters and homelessness invites a “reminder of what happens when a society has a threadbare safety net and no plan for those who fall through it—and, more pointedly, what happens when the largest companies in the state and the nation and world somehow find ways to avoid paying taxes.” All true, perhaps. But it’s a sentence that advances a polemic, one dressed out with characters Eggers prods around his board.

Additionally cumbersome tendencies of speculative fiction abound: excessively-detailed dialogue is enlisted to clarify the story’s terrain, there’s an emphasis on “world-building” for its own sake, and there’s an unearned abundance of coincidences. Too often, Delaney sits in on just the right meeting at the right time or happens to encounter key players at key moments; she’s a device rather than a person, an ironic refutation of the points Eggers hopes to score.

Essentially plotless until the final hundred or so pages of its nearly 600, the book detours throughout, deriding the ostensible techie take on everything from eco-travel to self-improvement, and moving through one set piece after another. By the time Delaney recognizes how deep she’s in over her head (even close confidantes are claimed, body-snatcher-like, by the Every’s enticements) it’s difficult to work up much interest or outrage.

There is a tale worth telling here, and Eggers can be an extremely engaging and perceptive writer; many of his other books are great proof of this. Here, however, the effort feels dispirited, a weary grousing. Early in the novel we learn, regarding the omnipresence and exactitude of the company, that “the Every (does) not leave loose ends.” There may be more to the story.

Ben Guterson is a staff writer at New York Journal of Books.