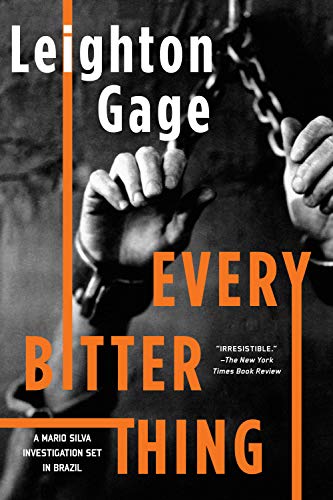 “Mr. Gage is a hell of a good craftsman.”

Here in Finland, there’s an old saying, “Siberia teaches,” in reference to Stalin’s torturous gulags. The same thinking applies to a bullet in the groin followed by a lethal physical therapy session with a Louisville Slugger—the preferred method of murder in Every Bitter Thing. This methodology offers up a powerful lesson about the differences between right and wrong; however, the lesson is not well absorbed when the pupils are dead.

Mr. Gage sets his Chief Inspector Mario Silva series in Brazil. Every Bitter Thing takes place mostly in Sao Paulo and Brasilia. Mr. Gage, although not a native, gives us a strong, vivid, and sharply drawn portrait of the country that demonstrates his intimacy with the locale. He paints a portrait of a beautiful country marred by violence, corruption, and poverty. Chief Inspector Mario Silva and his subordinates are fighting an impossible battle in trying to bring order to chaos, and they know it.

Every Bitter Thing opens with a string of similar murders. The first two victims are an engineer and a famous writer. The third is Juan Rivas, playboy son of the Venezuelan foreign minister. Enter Mario Silva and the Federal Police. Silva’s boss has a policy of seeing the murders of the powerful solved at the expense of all others. A murder with political repercussions must be solved lickety-split. Delegado Pereira, of the civil police homicide division, is convinced Rivas was murdered by his gay lover. Said lover was older and jealous. Love letters provide the damning evidence, but Silva isn’t convinced.

Silva checks the police database and turns up other murders with the same MO. And then the killer keeps killing. Two more victims. The other victims are scattered around various cities and have no apparent relationship to one another, but ballistics prove the same weapon was used in all the shootings.

The body count is high and mounting. Silva and his crew interview relatives, friends, and acquaintances searching for a connection. Their search leads them through to several unlikely suspects. One notable interview is with a mother whose teenage son was arrested, placed in the same jail block with adults, sodomized, and murdered. Silva lost a child of his own, and although neatly understated during his interaction with the mother, it is this that drives him to go to extraordinary lengths to ensure that justice is done.

Mr. Gage is a hell of a good craftsman. Secondary characters, the downfall of many a writer, are fully developed. A point of craft that all should appreciate. The crime story is equaled by the interactions between Silva and his colleagues, and the way they try to weave their way through the bewildering machinations of the corrupt in order to do their jobs and solve crimes. The dialogue is on the money, and rich with dry, black humor.

The ending is particularly satisfying. It makes the book. If you like your crime stories set in faraway places, leave Scandinavia for a book and head south. You’ll be glad you did.