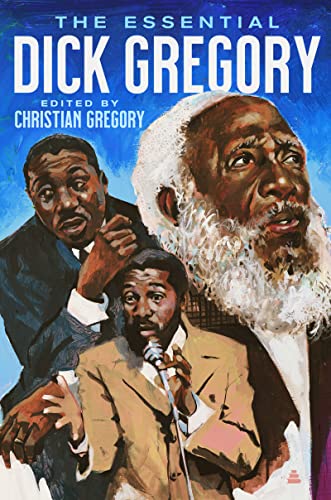 “Dick Gregory was one of a kind, the genuine article.”

Dick Gregory, an African American civil rights activist, burst onto the entertainment scene as a comedian in the 1950s. From that time until his death in 2017, Gregory was dedicated to the Civil Rights Movement and used his humor with great effectiveness on both friend and foe. He was an advocate for racial justice and social change and broke racial barriers across the expanse of American life. He became a star attraction on television talk and variety shows, as well as on the college circuit.

Gregory’s humor could be simultaneously funny and sharply critical. The combination disarmed his white audience and delighted his Black audience. He always had a point to make and usually did so with great effect, seldom offending his listeners.

The Essential Dick Gregory lays out a picture of the complexity of the man in his own words. What emerges is the existence of multiple Dick Gregorys, always changing and evolving in his interests while consistently driven by his concept of justice and ethical values.

His son, Dr. Christian Gregory, has dedicated himself to preserving the memory of his father through various forms of media. In The Essential Dick Gregory, his most recent project, Christian brings together the words of his father in an interesting and informative and, of course, humorous collection.

This was no small task. Dick Gregory’s output in written material (books and essays), in his hundreds of interviews, and in a mass of archival footage presented the editor and his staff with a mountain of material from which to choose. The result is this book divided into three sections: The Body, The Mind, and The Spirit. The first covers his childhood and early adult life and his discovery of comedy. The second deals with the Sixties, the Civil Rights Movement, and his rise to comedy stardom. The third section covers a wider span of his life from 1970 to 2017.

The Body deals with Dick’s childhood in poverty. His mother, Lucille, was clearly the single most important influence in his life and the source of his values. Gregory had an eclectic education in segregated St. Louis. In high school, he found his identity in running track and in playing in the band. He took both of these interests on to Southern Illinois University on a track scholarship. It was in track that he fought his first battles against segregation.

The Mind is concentrated on the Sixties, a time of change and turmoil in American life. At the center of the action, Dick Gregory, found himself in a position of prominence in the Civil Rights Movement. Deeply involved with the major movements and turmoil of the decade, he moved in step with an array of leaders from Martin Luther King Jr. to Malcolm X. As so many did, he came to a position of opposition to the Vietnam War.

In The Spirit, Dick Gregory is found most often on college campuses focusing on Vietnam, nuclear power, and the Apartheid regime in South Africa. He laid out one of his most controversial positions in an interview in Ebony in which he described birth control as a form of genocide against Black people. Health and diet became another of his causes, and he believed in and practiced fasting. He turned to veganism and called for others to follow him. His humor remained with him at every turn in his life and interests. His range of causes and interests seem to have been without limits or boundaries.

The Essential Dick Gregory covers a lot of ground and does it quite well. What it does not quite convey is just how funny and effective he was. If you watched him closely, you would notice that his most effective and unnerving comments were delivered with an inner smile that occasionally peeked through to his face. He knew he was funny; he knew he was brilliant; and he loved offering both qualities to those who came to see him in performance.

Dick Gregory was one of a kind, the genuine article. If you never saw him, this collection of his thoughts and writings are a wonderful introduction to him. If you did see him, this book will bring back memories, and you will learn things about him you may not have known.