Equal Under the Sky: Georgia O’Keeffe and Twentieth-Century Feminism 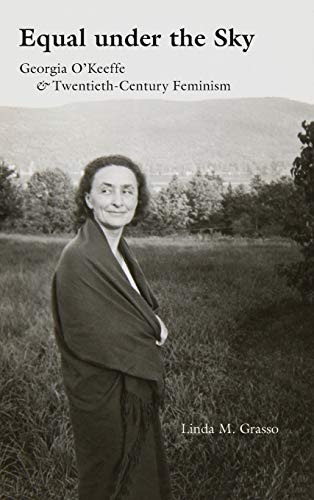 “No doubt, Georgia O’Keeffe would paint her support for the #MeToo movement though she might not post the tweets.”

When we think of the iconic American woman painter, Georgia O’Keeffe immediately comes to mind. This tends to hold true even for those who know very little about art and artists, perhaps because she is most widely known for her abstract closeups of flowers resembling women’s genitalia. Even though she denied this intent, the sensual overtone to her work tends to appeal to people who situate O’Keeffe as a pioneering early feminist and trailblazing role model who forged a high-profile career far beyond the genteel confines of home and family.

Arguably, O’Keeffe is our equivalent of Mexico’s Frida Kahlo—very much her own person in defying the conventions of the early 20th century to pursue her passion not only for painting as an American modernist who interpreted rather than replicated “reality” but also for an all-round free-spirited lifestyle.

Ironically, this picture of a crusading feminist is almost the polar opposite of Georgia O’Keeffe’s carefully constructed self-representation as a gender-transcendent innovative artist who fiercely rejected the label of woman painter, argues English professor Linda M. Grasso in Equal Under the Sky: Georgia O’Keeffe and Twentieth-Century Feminism.

Grasso uncovers how O’Keeffe’s various engagements with different aspects of emerging  20th century feminist movements over her long career were complex and apparently contradictory as O’Keeffe’s lifelong association with feminism was rooted in her lived experience and exhibited in the making of her art rather than expressed in direct social action. In this sense, her painting is innately political, wherein “feminism is akin to a canvas upon which  O’Keeffe, her contemporaries and her commentators created art and opinions” which continue to resonate in identity politics today.

Grasso unpacks this enduring influence of feminism on O’Keeffe’s artistic legacy by dislodging her from art history contexts and reassessing her work, life choices, correspondence, and reputation in a historical feminist framework.

She does this through an empathetic and carefully researched critical feminist reading of understudied sources such as archives of women’s organizations, letters from female fans, transcripts of women’s  radio shows, and programs from women’s colleges in order to position O’Keeffe vis-à-vis the various evolving strands of women’s movements in the larger context of American feminist history.

“Born in 1887 and dying in 1986, O’Keeffe lived during the flourishing of two twentieth-century feminist movements—first in the 1910s and then again in the 1970s. Embracing the first movement and disdaining the second, O’Keeffe sustained a relationship to feminism that was long, complicated and ambivalent.”

Probing the changing meanings of “feminism” over O’Keeffe’s lifetime throws light on some of these contradictions. For example, feminism first emerged in 1910s America in tandem with modernism, and it was natural for the new artist to immerse herself in this cultural milieu predicated on daring challenges to traditional conventions to explore her own ways of seeing the world and challenging gender inequities.

But in the second surge of feminist activism decades in the 1970s, O’Keeffe allegedly slammed the door in Gloria Steinem’s face, made disparaging remarks about women who identified as women artists, and refused to cooperate with feminist artists, critics, and scholars who were creating female-centered artistic theories, practices and histories.”

Was O’Keeffe afraid that direct social activism on her part would take too much precious time away from her art? Or did she fear that association with women peers would diminish her drive to operationalize feminism via independence, creative power and professional achievement in order to succeed in a male-dominated society?

These tensions are compounded by the fact that 20th century feminism is at the same time broad and narrow, being both a universal cluster of ideas around women’s worth as “equals under the sky” and the variety of different meanings people attribute to feminism based on time period, gender, race, class, and status.

Grasso excavates these complexities in six chapters, each of which examines a different way in which feminism affected O’Keeffe, her painting, relationships, fans, self-image, and audiences.

“Living Feminism in the 1910s” shows how the emerging feminist movement played a pivotal role in O’Keeffe’s artistic development. In particular, Grasso uncovers the powerful influences of three key people on her life and career—fellow art student and feminist activist Anita Pollitzer, civic activist Arthur MacMahon and, above all, photographer and modern art promoter Arthur Stieglitz who exhibited her work and became her husband.

During their somewhat unconventional marriage (O’Keeffe spent much of her time working in her beloved New Mexico retreat), Stieglitz remained her unflagging champion and was largely responsible for sensationalizing her paintings using stereotypical notions of gender difference counter to O’Keeffe’s proclaimed intent to rise above gender bias.

In “The Artist Idea” Grasso explores the ways in which O’Keeffe mythologizes her personal artist origin story as a uniquely individual journey. But in fact her artistic formation and career path followed a common gendered trajectory for her time where art as a domestic pursuit and even studying and then teaching art were considered perfectly acceptable activities. And the new feminist ideas opened up the possibility of women becoming professional artists.

“Women in the Picture” continues to explore these paradoxes around O’Keeffe’s engagement with feminism. Middle-class and elite women’s culture and feminist support systems were crucial to O’Keeffe’s success via teachers, clubs, institutions and long-term female friends who encouraged, lauded, validated, and sustained her work.

“Ironically, while O’Keeffe was ideologically committed to an equal rights doctrine, lived feminism in her marriage and life choices, and represented feminism in popular culture, she did not want to be identified with groups and projects that endeavored to advance women’s artistic opportunities and elevate their status.”

“You Are No Stranger to Me: Women’s Fan Letters” offers a fascinating analysis of the extraordinary number of letters written to O’Keeffe by female fans from the 1950s to the 1980s when she had achieved the status of an artistic movie star, a household name in many circles.

Clearly, O’Keeffe was the kind of public figure to which ordinary women could relate as a role model and they responded to her as they might to a Hollywood celebrity seeking autographs, meetings, and even advice on artistic pursuits and pursuing their dreams.

Whatever O’Keeffe maintained about her transcendence of gender, to her fans “she performed a kind of equal rights feminism that melded with cherished US beliefs in individualism, equality, and opportunity.”

“Georgia O’Keeffe’s Self-Portrait” illustrates how the artist defined herself and her legacy and constructed her own life story as she wanted to be seen and remembered in her 1976 eponymously titled book. This collage of words and images composed of essay excerpts, exhibition catalogue entries, and early feminist dreams celebrates her desired autobiographical self of a successful professional life forged on gender transcendence. Yet the understory of the conflicts such achievement engendered shouts louder.

In “Feminism as Politics and Art” Grasso proposes a way of understanding O’Keeffe’s feminism as liberal feminism because of her belief that women should have access and opportunity by seeking women’s integration into existing structures. But at the same time O’Keeffe’s feminism can be considered radical via her art making with its potential for motivating feminine creativity, in itself a powerful kind of activism.

In sum, Equal Under the Sky offers a fresh perspective on Georgia O’Keeffe and the  symbiosis between her art and  20th century feminism. Grasso’s writing is lively and accessible, not always the case with English professors of post-everything critical theory! The contradictions in O’Keefe’s feminism are teased out with finesse. And the message that there is no one monolithic feminism for all people for all time comes across loud and clear.

Just as O’Keefe’s art and life continues to resonate in the new millennium, so does the subtext that advances toward women’s equality may be not only more apparent than real, but also subject to reversal at any time in a world which seems to be bent on reasserting male power and privilege. No doubt, Georgia O’Keeffe would paint her support for the #MeToo movement though she might not post the tweets.