An Enlightened Philosophy: Can an Atheist Believe Anything? 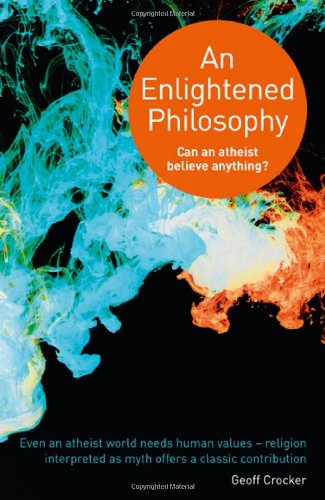 This argument can also lead to a form of schizophrenia that many live with without any apparent need for antipsychotic drugs: Is it God or is it science—or both? As suggested on one enlightened bumper sticker, “Maybe God did it Darwin’s way.”

Crocker’s work is a short but interesting diversion in this discussion, well mannered, and well documented. Crocker is a man who lives two lives, “one in industrial strategy work for corporate clients worldwide; and one speaking at conferences on issues of faith and values,” lecturing on the interpretations of religious themes. This work specifically looks at “how faith could be interpreted for the increasingly dominant atheist” community while maintaining “a strong conviction of the value of religion if interpreted as myth.”

However, Crocker’s work also has a bit of its own dissociative identity. To an amateur philosopher of religion, there might appear to be two writers of An Enlightened Philosophy. The first personality wrote the initial chapter, “Humanity Today,” with a deep and sometimes overwhelming discussion of the new enlightenment and arguments of God’s existence or the need for God.

Containing some circular reasoning and, to this reviewer, incomplete arguments, the first section moves though modernism, historical humanism, and science, while making the case for Descartes’ Cogito, ergo sum. Due to the seemingly nonlinear movement, there is some confusion as to the reasoning behind some of Crocker’s observations; however, in the end, he brings the argument back in line and is able to continue.

The second personality takes over for the rest of the book. It is easier for the non-Ph.D. level philosopher to understand and appears to maintain a better flow and direction. Though the chapter titled “The church in modernity” feels incomplete, the second half of the book appears to be more personalized, showing a bit of Crocker’s discomfort with the modern Church of England, though he does take on the Catholic church and other Christian movements on occasion.

The personality writing the second half that also seems to break with the initial thesis: that atheists need to interpret and use Holy Scriptures in terms of myth and not metaphysical truths. Crocker’s arguments concerning non-deistic beliefs appear to be more subtextual, leading to the thesis that the church needs to be more liberal in thought and that reading the Bible as myth and not as literal truth is the correct interpretation.

His closing statements seem to support this position. Crocker writes, “Today’s church would have to change its emphasis and pre-conditions to be able to [fulfill] a host role . . . which does not insist on specific or any belief, but will have to be prepared to be servant rather than master . . .”

Referring to Amitia Etzioni’s Comparative Analysis of Complex Organizations, Crocker supports his position that “the church itself is a very rigid inflexible institution” when it comes to any change that may interfere with its role as “master” as opposed to “servant” of its flocks.

What appears to be missing is any in depth discussion or understanding of atheism, agnosticism, and deism, Judaism, Islam, Hinduism and others in terms of how they interpret the Christian faith as myth and interpret the stories thusly. His singular in-depth discussion of any deistic or non-deistic sentiment seems to lean on Andre Comte-Sponville’s A Short Treatise on the Great Virtues, which finds its voice in the concluding section.

Crocker does argue most successfully the idea of the virtue in justice. He looks to a possible (and probable) mistranslation of the Hebrew (tsedeq) and Greek (dikaiosune) to change biblical words from “the kingdom of God” to “the kingdom of justice,” so that the “kingdom is described as consisting of ‘justice, peace and joy.’” Though “justice” is not measurable but interpreted by individual and group morals, it is the true basis of most biblical lessons. This section alone makes this book worth reading.

Crocker’s conclusion continues to suggest that it is the church that must change its beliefs from literal to mythical interpretations of scripture. He posits that in the end, it is not the atheists, agnostics, nor deists that must change their way of interpreting the Holy Bible; as such, the subtitle appears to be misworded. It is not the atheist who needs to change his or her belief system, but the church that must humanize its values through myth not literalism. It is this somewhat hidden suggestion in the book that needs be examined in greater detail in An Enlightened Philosophy.