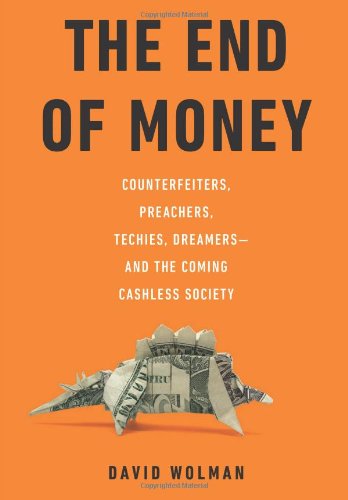 “This is a very well written study, and it has none of the alienating gravitas of an economics tome. The author follows interesting stories populated by colorful characters. And he explains difficult concepts with skill. The End of Money: Counterfeiters, Preachers, Techies, Dreamers—and the Coming Cashless Society by David Wolman is one of the best books in a long time on a difficult subject.”

It seems we are moving toward a world without money. Everyone agrees that it is happening, but what exactly does it mean for money to come to an end?

In fact, we are continuing a long history of the increasing conceptualization of money. And rather than the end of money, we are already witnessing the replacement of paper cash with electronic blips. In the grand scheme of things, paper cash has had a relatively short history, and that short history is reaching a concluding phase.

What we are seeing is not an end. It is a change, with the essential elements staying the same. With “globalization” reaching more and more of the world’s population (there still seem to be people on our globe who have not experienced it), money is more important than ever.

No one has any idea how long humans have exchanged things of value. Our oldest texts refer to trade and economic exchange using standardized units of value. Pure barter is unlikely to have ever existed, as it depends upon a “double coincidence of wants.” Instead, market exchange societies used commodities that were fungible, such as grain or cattle.

Coins, which began as weights of precious metals, were a further conceptualization of money. The point of making coins from precious metals was to instill confidence that others would accept them as units of exchange. No one melted them down because the metal was useful! (Indeed at the same time that more and more people took up the practice of leaving pennies on the checkout counter, the melted down value of those pennies was actually closer to two cents).

The metal itself was a claim on value. There is nothing intrinsically valuable about gold colored dirt, except that most people seem to agree it is pretty, and it is also relatively scarce.

Over the past few centuries, people the world over have started to use paper more and more as claims on value. At first it represented a claim on a metal (gold or silver or, for 150 years in Virginia, tobacco). More recently it has simply been an inchoate claim on something valuable in the future. Both the sophistication of money, and the complexity of our confidence in it, has been increasing.

The End of Money, by author and journalist David Wolman, is a thoughtful and engaging study of the transition of those claims on value, from claims written on pieces of paper (or polymer, in the case of Australian currency), to electronically stored claims. Mr. Wolman is a writer for Wired. He skillfully covers the essential themes of theories on the economics, politics, sociology, and anthropology of money; and he does so painlessly. Interwoven with the theoretical material are stories of characters who represent various elements of the “end” of money.

One character is a fundamentalist, who sees the end of cash as a sign of the coming Armageddon. Another is a convicted counterfeiter who disdains the role of government in the production of money, and openly mints coins. He is convicted, one suspects, more for his whacky politics than for his numismatic enterprises. Other characters design money in Iceland and make mobile payments in India. We are treated to a world tour of what it means for cash money to be going online.

A central character is the author himself, who lives for one year without using cash. He is an advocate for a cashless society. Cash seems to repulse him. It is dirty and laden with germs. It costs the government money to produce, often beyond the value of the notes themselves.

Cash not only entails considerable costs to produce, but it wears out quickly. And the costs of producing it do not include all of the law enforcement required to prevent counterfeiting, or to dispose of used bills (the lead in the ink makes money taken out of service a hazardous waste).

And what is so magic about $100 printed on a banknote? Somewhere in the world there is a mint that produces $100 bills nearly identical to the real thing. Government officials assume that it must be in North Korea, because it is likely that only a government would have access to the machinery required to manufacture the bills, and because new bills seem to come from Asia. But even that is not a sure fact. Awhile back, government officials thought the source of “super 100s” might be in the Beka’a Valley of Lebanon, which was then controlled by the Syrian government.

What difference does the source make to the common person? So long as the super $100 is accepted by others, it serves the exact same purpose as “real” money. The U.S. government does not enjoy “seignorage” by issuing paper worth much more than the production costs, but most people are not very concerned with giving the government free value when they use money. The only way it affects us is that it is more difficult for the Federal Reserve Board to control the money supply when it is not issuing paper money. But then again, paper money is only a small part of the money supply (most of it is already in the form of electronic blips in bank computers), and a majority of physical $100 bills are held outside of the United States.

That gets to another reason for author Wolman to advocate the elimination of cash. Someone who depends on the existence of bundles of $100 bills is most likely up to no good. Cash is more anonymous than electronic funds, although Mr. Wolman does not dig very deeply into why this need be so. Presumably it is easier for the Secret Service to track large electronic transfers than to keep track of where various serial numbers on $100 bills end up.

Liberty is often equated with the use of cash, because cash is harder to trace. And cash that is not issued by governments is seen by some as even more liberating. But of course, in the real world these libertarian virtues are most commonly to the advantage of money launderers and crooks.

A cashless society means a shift from security of paper against counterfeiters, to security of electronic claim, which we access through identification techniques. While David Wolman traces the interesting ways that money issuers prevent counterfeiting, he spends relatively little time on identification as a way to verify claims on electronic media. Now that most of our “money” is electronic, rather than in coinage or paper, stealing our means of identification is becoming more popular than property theft. And that is another subject that gets short shrift, but deserves more attention in a book on the coming cashless economy.

Perhaps the most important implication of a cashless economy is the effect on the “under-banked” underclass in society. They depend on cash much more than people whose paychecks are directly deposited, and whose monthly bills are automatically debited. The End of Money goes to India, to show how micro payments using cell phones can help the poor free themselves from costly dependence on cash. It is an intriguing argument, but unless governments agree to protect the privacy of people engaging in mobile payments schemes, it is unlikely to pertain to the under-banked in the United States (many of whom are undocumented immigrants).

In the end, none of this spells the end of money—instead it describes the transition of money from paper to computer memory. The basic units are still fiat currencies created by governments. Alternative monetary schema is briefly examined by author Wolman, but most of the stories he follows are about the end of paper cash, not the end of money.

This is a very well written study, and it has none of the alienating gravitas of an economics tome. The author follows interesting stories populated by colorful characters. And he explains difficult concepts with skill. The End of Money: Counterfeiters, Preachers, Techies, Dreamers—and the Coming Cashless Society by David Wolman is one of the best books in a long time on a difficult subject.