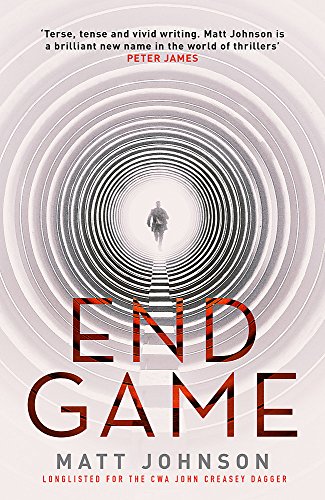 Matt Johnson’s Wicked Game trilogy began with Wicked Game, then Deadly Game, and now wraps up in End Game. A complicated mix of police procedural and antiterrorism thriller, the book is a must-read for those who’ve devoured the first two titles.

This British trilogy as a whole is based loosely on Johnson’s own career, first as a soldier, then in the Metropolitan Police for 25 years, and present at such hot news events as the London Baltic Exchange in 1993, the Regent’s Park bombing in 1982, and a 1983 shooting at the Libyan Police Bureau—followed in 1999 by a discharge from the police to enable treatment for post-traumatic stress disorder (PTSD). As his self-introduction admits, “Hidden wounds took their toll.”

Much of End Game unfolds from the point of view of Inspector Bob Finlay, whose hoped-for promotion just hit the skids, probably due to both his own case of PTSD (already treated) and actions he took the previous year that look questionable to some other officers. Long ago trained in hostage negotiation, Finlay responds to a call that’s specific to him, as a police constable who’s flipped out and barricaded with a hostage asks for Finlay by name. It turns out they have experiences in common, and Finlay is highly successful in ending the standoff. But in the process, he bucks the orders of a vicious and unforgiving superintendent from the “Met” Complaint Investigation Branch. And now it’s Finlay who’s in trouble.

Many segments of End Game are enormously appealing. For instance, there’s Finlay’s effort to reassure his wife, by filling her in (after their little daughters are in bed) on what’s taken place:

“I wasn’t sure where to start and, to begin with I didn’t make a lot of sense. But the more we talked, the more focused the conversation became. Jenny listened as I talked, asked questions and joined in with ideas and suggestions when I seemed to be either stuck for the right words or lacking the means to describe how I felt. . . .

‘We need you back, Robert,’ Jenny then said unexpectedly, as she pulled away. ‘Looking after your girls.’

I was confused. ‘I’ve not been anywhere.’

‘Not in the physical sense, no. But you’ve been away in a different world, especially over the last couple of days. I’ve lost count of the number of times I’ve spoken to you and you haven’t even heard me.’

Can Finlay manage his increasing emotional distress over the case and the frame-up he sees taking place, and avoid becoming the scapegoat? The suspense is strong and the scenes memorable.

On the other hand, Johnson narrates through multiple points of view, including that of the criminals, a difficult routine to pull off. As a result, readers often know what’s around the corner, what’s going to hit Finlay next. It’s an awkward strategy and doesn’t work well, distracting from the plot and its twists. There’s a terrorist (Arab) plot involved, as well as complications of British/UK law enforcement and malicious political maneuvers. A stronger book would have relied more on Finlay’s own growth, and less on the often jerky changes of viewpoint.

End Game will appeal most to those already enmeshed in the earlier volumes of the trilogy, and for those collecting terrorism plots. James Patterson readers may find it a good fit. But it won’t fit well for those who prefer a crime novel where the pace is more determined by the characters and their motives for investigation and growth, as in some of the Michael Connelly Bosch books; Finlay’s also not as driven or as generous as Lee Child’s Jack Reacher, and the suspense doesn’t rise the way Lisa Gardner would paint it. Dan Brown fans, however, may wish to add this to the shelf of “to be read” for the season.