The End of Europe: Dictators, Demagogues, and the Coming Dark Age 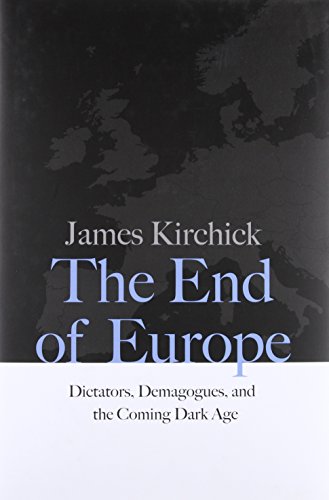 “a wake up call about the dangers of entrenching divisions around national identity—a summons to action.”

“Make (insert country here) great again” is far from being a new slogan in the international political arena. In fact, several well-known heads of state have used that catchphrase, or something very similar, as their rallying call. Hitler, Mussolini, Reagan, Thatcher, Marcos, and Putin were among that number long before Donald Trump campaigned for the presidency in 2016 on the promise to return America to an imagined past utopia.

These individuals deployed the slogan in very different contexts. But for all it was central to an identity politics playing on nationalism as a unifying concept under strong authoritarian leadership offering a vision of a better tomorrow by resurrecting past greatness. Such an ethos thrives in a climate of widespread popular discontent stemming from decline in economic wellbeing, a feeling of being ignored by government, and perceived loss of national power and influence.

The Trump campaign took advantage of such a groundswell of alienation of the margins fanned by fears of immigration conflated with national security concerns to put forward a strong America first platform. Although this kind of nationalism can spur economic productivity via a more positive business and labor climate, it can also foster an “us versus the world” xenophobic protectionism counter to dominant globalization currents.

And instead of being just another example of American exceptionalism, the election of Trump is not a one-off but part of a populist upsurge that has been challenging the liberal democratic realm for the last three decades.

How this global crisis of liberalism is threatening the future of democracy as we know it is the focus of The End of Europe: Dictators, Demagogues, and the Coming Dark Age by American political journalist James Kirchick, young, but already extraordinarily well-seasoned as a reporter on the European beat.

Kirchick shows us a continent currently confronting its deepest crisis since World War II. Once the stronghold of liberal democratic values, Europe today is again being haunted by the demons of anti-Semitism, populist nationalism, racism, and predatory territorialism thought dead and buried long ago.

Disappointment with the European Union model of federalism which has gone far beyond the original post-war continental consensus around a customs union, compounded by economic and cultural tensions exacerbated by an unprecedented migrant influx has fostered populist political movements on both the far right and the far left which have garnered unprecedented support.

Discontent with economic stagnation, high unemployment, excessive regulation by the bloated Brussels bureaucracy, the admission of weaker states, an unaffordable welfare state, the free movement of labor, and especially the open-door policy toward Middle Eastern and African migrants may entice more EU members to emulate the Brexit vote shocker of last year. The end of an integrated Europe is now imaginable, if not imminent.

Kirchick shows us the extent of this discontent and how it has unfolded in reactionary movements via a series of vivid dispatches from current European hotspots.

We start our journey on Europe’s edge looking at Russia as the elephant in the continent. Here, Vladimir Putin has been working systematically to “make Russia great again” by reclaiming global and regional hegemony lost in the humiliating end of the Cold War by impinging on the political autonomy of neighboring countries, direct territorial appropriation and undermining NATO.

Hungary offers a good example of Putin’s desired outcome of fracturing Europe by supporting national reactionary movements. The far-right Fidesz Party in power openly endorses “illiberal democracy” legitimized by rewriting Hungary’s history to recast the country as a victim of Nazi predation rather than an active collaborator in the Holocaust which is now seen as a “marginal” aspect of World War II!

The process by which this revisionism was achieved is chilling, particularly as the Trump administration seems to be embracing some of the key elements.

Germany, however, has bent over backward to avoid making itself great again.  Fear of war is expressed in dogged multilateralism requiring a balancing act between an accommodationist policy toward Russia and an ambivalent relationship with the United States, now seen as nanny, ally, and betrayer consequent on leaks about American espionage. This also helps to explain Germany’s open-armed but misguided welcome of the tidal wave of Middle Eastern migrants despite valid concerns about Europe’s capacity to accommodate and acculturate such a huge group.

This unprecedented influx which reached flood levels in the Great Migration of 2015–2016 is exacerbating tensions between Europeans and their Muslim minorities. In particular, the massive gender imbalance of migrants from countries where attitudes towards women differ greatly from the West is highly problematic. Of the 1.5 million asylum seekers who came to Europe in 2015, 73 percent were male.

Cases of sexual harassment tended to be underreported because of the official European culture of welcome and fear of appearing Islamophobic, but incidents such as the 2015 New Year’s Eve mass assaults on German women outside Cologne’s main train station perpetuated by some 1,000 newly arrived Arab and North African men were impossible to ignore. More than 650 women filed criminal complaints reporting abuse ranging from groping to rape.

“Suddenly, I felt a hand on my bum, on breasts, it was horrific,” one victim recalled. “I was desperate, it was like running the gauntlet. Over the space of 200 meters, I think I must have been touched about 100 times.”

As a result of such culture clashes and an increase in terrorist strikes throughout the continent, identity checks have been reinstated at many previously open border crossings, while even Sweden and Germany are reducing the numbers of migrants accepted because of popular outcry and the strain on public services.

Meanwhile anti-Semitism is on the rise, in part because of the massive Muslim influx, causing Jewish schools and synagogues in some countries to resemble armed bunkers and this climate is escalating the exodus from France of the already beleaguered Jewish population.

As a result of all these obvious failures, far right political parties have been able to make unprecedented gains in almost all EU countries and encouraged Britons to make the landmark decision last year to quit the union. But this decision probably owes as much to the manipulative grandstanding of the leaders who pushed for Brexit and then jumped ship as to the xenophobia of an electorate opting for a retreat to Little England.

After a detour through the Greek tragedy dealing with the bailout of an economic basket case that should never have been admitted to the EU, Kirchick’s tour de Europe ends in the Ukraine, back to where the book began with Russia’s predation on its neighbors. Here, Putin was able to annex the Crimea in plain sight of the world through economic blackmail, political subterfuge and disinformation warfare condoned by the far right and the far left and largely given a blind eye by the center throughout the West.

This is Kirchick’s message. The dispatches he offers in his well-chosen case studies may not signal the imminent breakup of the European Union, but the manifold failures collectively represent an unparalleled crisis of liberal democracy.

“As the memory of World War II, the Holocaust, and the gulag fades. So too does antipathy to the illiberal ideologies that spawned Europe’s past horrors . . . Today, while the threats to freedom may be more diffuse, they are no less potent, If the values of America and Europe do not continue to shape the future as they have its recent past, then those of authoritarian powers like Russia will.”

And if America, too, takes a an illiberal turn and distances itself from Europe then the dawn of a new dark age no longer seems like the scenario of dystopian novels.

The End of Europe is essential reading for everyone trying to make sense of the current kaleidoscope of world relations wherein historical revisionism, disinformation and cyber warfare mirror constantly shifting “alternative truths” remanufactured via denial, denunciation, deception and deflection.

Although unabashedly pro-Europe and morally committed to liberalism, Kirchick’s keen and highly readable reporting fills in a lot of the missing pieces in this new global jigsaw puzzle, such that the big picture comes more clearly into focus. And that picture is a chilling one indeed. So this book is a wake up call about the dangers of entrenching divisions around national identity—a summons to action. Heed it!