The Empire of Dirt: A Novel 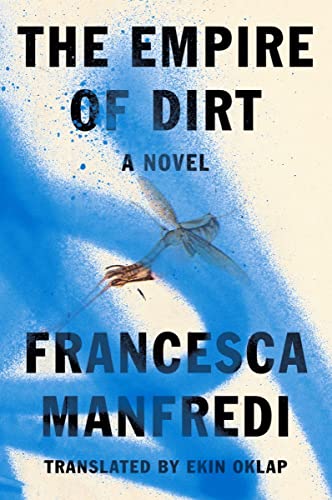 “lyrical beauty of Manfredi’s prose . . . at its heart, The Empire of Dirt is a rich puzzle impossible to resist.”

On its face, Francesca Manfredi’s debut novel is a traditional coming-of-age story, leaning on any number of common tropes—preteen female narrator, absent father, beautiful mother, strict grandmother. What makes this novel remarkable, however, is the skillful re-rendering of these all-too-familiar characters and plot devices. What seems recognizable at first glance is quickly recast into something foreign and unknown, which makes for a compelling read, both disconcerting and enchanting.

We enter the upended world of this novel through the retrospective gaze of Valentina, remembering her 12th summer in the country home she shared with her mother and grandmother. Built by Valentina’s great-great-grandparents, the house has only three walls of windows, and those windows are few and small. Residents of the nearby village have dubbed the house “blind,” as well as “cursed.”

Valentina has moved into the attic when we meet her, after years of sharing a room with her grandmother. It’s here—alone in the dark of a summer night—that she faces her first period. Manfredi manages to make this particular menses uniquely terrifying. There’s a darkness underwriting the women in this house, and Valentina knows (if subconsciously) that this blood signals her entry into that space.

To punctuate her trepidation, the crack in the wall of her attic bedroom begins to bleed. Valentina blots and hides it the same way she hides the blood from her own body. She prays for the blood to stop, and it miraculously does—from both body and wall—but the wall remains stained, and it’s eventually discovered. Valentina’s mother bleaches it until the room takes on a “cold, white smell, like hospitals or snow,” and the narrative remains haunted by this erasure.

Valentina’s father lives in the blind house, but he’s a loose presence, and he leaves for an international job this same difficult summer. Valentina’s grandfather is long-dead. There are no brothers or uncles. Men don’t seem to belong in this family. And it feels fated, natural.

At one point, Valentina asks her mother if she always knew she was having a girl, to which her mother replies, “‘Some part of me could feel it. It’s what we’re destined for, isn’t it?’”

Valentina asks why—Why are they destined for this?

“‘Because we’re women. And we generate more women. Men don’t last with us. That’s what everyone says, isn’t it?’”

Her mother goes on to say she doesn’t believe what everyone says, of course, but we aren’t fooled, and neither is Valentina. We believe, even as we doubt.

Valentina’s mother had her when she was young, still a child, and she is still the beauty she’s always been, but Valentina is incapable of seeing this, which brings forward a rich thread that runs its way through the entire story, like the erasure of Valentina’s blood—the question of role and responsibility, of perspective. “I didn’t notice it,” Valentina says of her mother’s beauty, “I couldn’t recognize it. . . . She was my mother, and that seemed to blur her outline and muddy her features for me.”

And then, there is the grandmother, devoted to her religion, demanding that Valentina get down on her knees and pray, the grandmother with her hand to her belly, rubbing, saying “There is a limit to what we are able to carry inside.” She insists on working the land, gardening, caring for the animals. There is something old world and otherworldly about her, and her connection to both daughter and granddaughter is one of deep devotion shaded by suspicion.

The grandmother also feels like the key to deeper mysteries that plague the women in this blind, cursed house. After the stain and the smell of bleach fade from Valentina’s room, the events that unfold are difficult to name or explain. The home and surrounding land is infested with frogs, mosquitoes, flies, locusts. Farm animals contract disease. Valentina breaks out in boils. Each of these assaults feels both fantastical and deeply real, metaphorical and concrete, and we’re left to wonder whether—like the absence of men—they are destined.

And ultimately, this is the fundamental question driving Manfredi’s The Empire of Dirt: What is the origin of a family’s suffering? Is it the result of some greater force beyond our control, or is it our own perpetuation of distorted beliefs? Does hardship come from a curse or from our own altering of nature? Is the family innately wrong for men, or have the women simply made it so?

Though some elements of the story are a little too blatant—Valentina’s grandmother asks her to read the book of Exodus, for instance—and other elements don’t carry their full weight—the relationships between Valentina and her peers don’t feel particularly inspired—these moments are easy to overlook within the greater arc of the narrative and the lyrical beauty of Manfredi’s prose, and at its heart, The Empire of Dirt is a rich puzzle impossible to resist.