Empire of Self: A Life of Gore Vidal 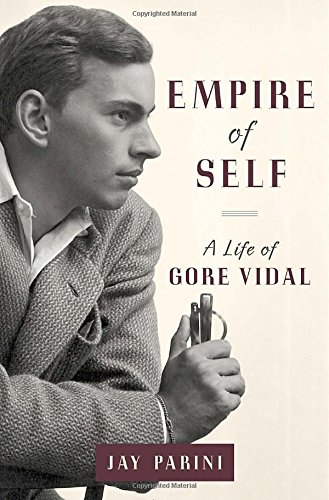 In 1935, ten-year-old Eugene Gore Vidal became famous on newsreels as the youngest person to ever fly a plane when his aviator father turned over the controls to prove how easy it was. Gore remained in the cruising spotlight navigating his high-profile career as novelist, playwright, political candidate, and media gadfly. “Never pass up a chance to have sex or appear on television.”  He famously quipped.

But, as much as Vidal remained in the public eye, he remained a man of many masks and determinedly as elusive as ever.  Now, his official biographer Jay Parini unravels what made Vidal tick in the deftly titled Empire of Self: A Life of Gore Vidal.

Parini and his wife lived near Vidal at his Cliffside writer’s sanctuary Ravello, where Vidal and his lifelong Partner Howard Austen resided for decades. Parini’s friendship spans 30 years and Vidal trusted him enough, a la Boswell, to want him to “write everything down . . . and do notice the potholes. But for God’s sake, keep your eyes on the main road!” He doubted at first, that he would remain friends with Vidal if he took the assignment, but lucky for us, Vidal agreed. The result is an unexpectedly vibrant portrait that fully evokes Vidal’s magisterial and louche life.

Vidal’s memoir Palimpsest opens with the line “A tissue of lies?” his snarky assessment of what others had written about him and those who would question his version of the facts about his own life. Gore’s fictional self-portraits populate his novels. Parini reveals Vidal’s many “selves” and doesn’t to pretend to know everything.

Vidal had a semi- privileged childhood, and he was happiest when his parents were absent, and he stayed with his grandfather Senator TP Gore. Gene, his father, was completely preoccupied with his career as an aviator and industry innovator. Gore had a lifelong adversarial relationship with his mother, a social climber with little maternal interest in him.

Rejecting a predictable Ivy League career, Vidal enlisted in the Navy, becoming a ship navigator in the Aleutian Islands. After WWII, he emerged as one of the most promising new writers who were shaking up the literary landscape in New York and Europe. Vidal’s first books Williwaw and The City and the Pillar, with gay characters and themes, caused a sensation, even as they were vilified by a homophobic press.

Bored with the stodginess of the industry and the influence of critics, Vidal became both creatively bolder and commercially ambitious. Tennessee Williams advised him to write for the theater and screen for fast cash. Vidal became one of Hollywood’s most sought after writers, also churning out TV scripts in the 50s.

In the 60s, he ran for Congress, but lost twice; meanwhile he became a sought after political pundit. Vidal turned out a string of bestsellers including Julian, Washington, D.C., Burr, 1876, and Lincoln, among others, and became the premiere author of highly praised historical fiction.

Parini’s authority assessing Vidal’s literary legacy, his achievements and failures is tracked throughout the book with deft authority. His media allure increased, however harshly, with ongoing public battles with such famous rivals as William F. Buckley and literary rivals Norman Mailer and Truman Capote. His literary stature also overshadowed by biting satires as the bestselling Myra Breckenridge and a run of failures including Kalki, Duluth, and Two Sisters, among other experimental flops.

Throughout his life, Vidal romanticized his relationship with Jimmy Trimble, who was killed in WWII. He never gave an inch in public about his sexuality until it was such an open secret that he played along, always giving himself the escape hatch that “everyone is bisexual.” In many respects his academic theories about sexuality deflected any probing into his own private life. Parini speculates how much had to do with Vidal’s ambitions in politics. A gay scandal is the central plot device in his 1960 play The Best Man.

Meanwhile, he fell in love again with Howard Austen, whom he met at the baths in New York, and they started to live together, Austen helping to keep Vidal’s public and private life in working order. Vidal continued to hook up with other men, with Austen’s apparent approval. Only after Austen’s death did Vidal hint at the depth of their relationship.

Vidal was a highly functioning alcoholic, up early every morning to write for hours, returning to his desk after lunch for correspondence and business management. He attended to every detail of his writing career, while Austen arranged everything else in his private and business life.

Age and health problems finally slowed Vidal and when Austen died in 2003, his life all but unraveled, although he still remained in the public eye, often as sharp as ever, but looking harsh and eccentric.

Parini writes of Vidal’s last decade of decline with insight and sensitivity. After Austen’s death Vidal’s health declined rapidly, and emotionally he was completely lost. Parini reveals the Vidal’s softer, private side with his friends, colleagues, and family circle in which he was always generous and understanding to friends and many distant family members, without making a fuss about it.

For Vidal fans, Empire of Self is the definitive, fine-lined, unsensationalized portrait of the man that we have been waiting for.