The Emerald Atlas (Books of Beginning) 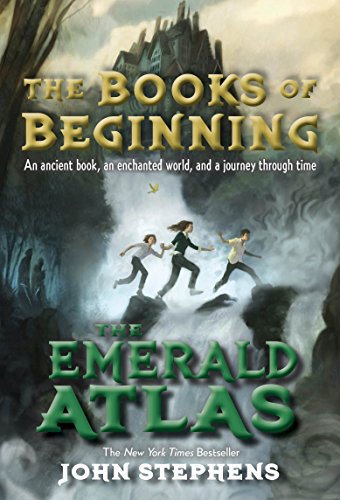 Fifteen-year-old Emma barely remembers the night ten years ago when her mother woke her, made her promise to look after her younger siblings Michael and Emma, and then packed her into a car and disappeared.

Now the three orphans, having bounced for ten years among ever-grimmer orphanages, are dispatched to a crumbling mansion in a ruined landscape bereft of children. Exploring the mansion, they find a book and photograph that transport them 15 years into the past. A beautiful but evil countess dominates the region, holding its children prisoner while their parents toil in the mines for a hidden treasure, which turns out to be the very book the three orphans are clutching.

So begins The Emerald Atlas with a number of familiar tropes: the special children who must be protected from evil early in life; the trio of unfortunate orphans suffering the comically ridiculous cruelty of adults; the lost object of awesome power for evil. But author John Stephens manages to combine these hoary elements in a page-turning tale of adventure, friendship, and family loyalty.

The three children have distinct and likable personalities. Kate carries a huge burden of responsibility for keeping her diminished family together and safe. Michael compensates for his loneliness and timidity by learning everything possible about the culture of dwarves, which everyone else thinks are fictional. Tough Emma, the youngest, torments her brother and fights with anyone who looks at her sideways.

In escaping the Countess, the three children have to rely on the huge, wild fighter Gabriel, himself a denizen of the world of magic. They brave ancient tunnels and fight undead creatures until they fall prisoner to corrupted dwarves. When they meet the captive magician Dr. Stanislaus Pym, who will run the mansion as an orphanage in the future, he seems already to know more about them than he should.

Meanwhile Kate’s powers to travel through time and space continue to develop in confusing ways: She even visits her mother before her own (Kate’s) birth. Finally, after a climactic battle, the three children return to try and rescue the captive children before they plummet to their deaths over a failing dam.

In The Emerald Atlas the action hurtles forward. Descriptions are vivid; exclamation points spatter the dialogue. There are convenient rescues and implausible stumbles, as when nobody notices that the Countess doesn’t really perish, but instead slips through time with Kate and then hides herself away for 15 years to await the children’s arrival. But implausibility won’t matter to young readers, who will emerge from this wild ride of a book eager to pick up the sequel.