The Embodied Mind: Understanding the Mysteries of Cellular Memory, Consciousness, and Our Bodies 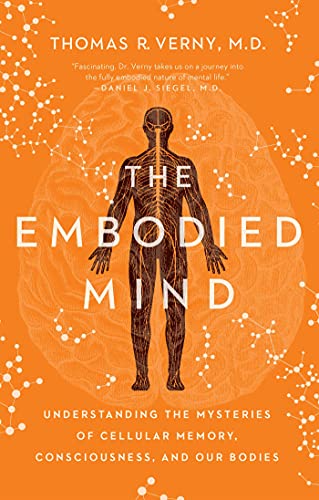 “The premise that cognition and consciousness are traits that arise not solely from the brain but also involve the body, or soma (as in the common word ‘somatic’), is not new.”

This title holds much promise, but the execution of Verny’s Embodied Mind: Understanding the Mysteries of Cellular Memory, Consciousness, and Our Bodies disappoints in the end. The premise that cognition and consciousness are traits that arise not solely from the brain but also involve the body, or soma (as in the common word “somatic”), is not new.

Neuroscientist and philosopher Francisco Varella published his now classic The Embodied Mind in 1991. His cross–fertilization of disparate fields—phenomenology, science, Buddhist practice—was highly influential and led to a new perspective in cognitive science called “enaction,” in which both first-person experience and the context of environments were regarded as valid inputs to consciousness.

Since then, numerous books have appeared, and the concept of embodiment has spread. Horst Bredekamp, art historian and philosopher at Humboldt University in Berlin, promoted the perspective of "Image Act and Embodiment" (Bildakt und Verkörperung) in numerous publications and scholarly conferences.

So as credentialed Dr. Verny may be, he sees his pet theory as a new hammer, and every observation no matter how tangential as a nail.

Yes, mind may be more than the brain, but he ranges too far in promoting “a quantum mind,” wherein the brain is “a transceiver of mental activity” that works through the organ but is not necessarily produced by it. How it works this magic, he doesn’t say.

His notion of cellular intelligence is interesting speculation, but annoyingly presented as settled fact. Yes, there are anecdotes of heart transplant recipients exhibiting changes in personality that somewhat reflect those of the donors, but how does he square their handful of stories with hundreds of thousands of other unaffected transplant recipients? It is a leap to suggest that memory regularly transfers via cell transplantation.

Extraordinary claims require extraordinary proof. Which is not forthcoming. Instead, the reader meets hyperbolic assertions such as “the findings of these truly revolutionary studies . . .” The author contends that the memory of live events leaves “some kind of impact, influence, mark, trace, record, or imprint on our cells and tissues,” without suggesting what that imprint might be or by what manner of energetic coupling it could be achieved.

From there the rest is rampant speculation, and the analogies forced. Where does one even begin to unpack extraordinary claims such as “cells remember their origins, all the way back to conception”? The author repeatedly conflates correlation with cause.

The accompanying press kit touts the number of talk shows the author has appeared on, and all the advance blurbs are by “best-selling authors” that uniformly only superlative endorsements. Caveat lector.

Where the text feels it necessary to define well understood terms as “cortical neurons” as “brain cells,” it signals its populist perspective in talking down to readers, most of whom are willing to be persuaded. But rather than offering a clear thesis, Verny insists that each far-ranging observation is explained by his one idea. He doesn’t synthesize them into a thesis that could be supported, argued, or disproved.

Then there are factual errors. The number of brain neurons is 86 billion, not 100, nor is it a new discovery that “the spinal cord might learn motor skills independently of the brain.” For decades we have known that the movement patterns of walking, for example, are programmed in the spinal cord, which is why we don’t need to think about it. Similarly, homeostasis is nothing new, yet presented here as a breathtaking discovery.

The 38 color images on glossy paper are pretty but add nothing. Worse, they come across as a patronizing introduction to Biology 101.

Verny cites instances in which outwardly normal individuals were found to have one brain hemisphere, or more, missing. But he misunderstands the import of these cases. And while he repeatedly says “I think the simplest, most logical, and scientifically sound explanation is . . .” he never gives readers the benefit of knowing what the other side’s argument might be. Lastly, he sloppily infers a wholehearted equivalence between results observed in life forms such as honeybees and that of humans.