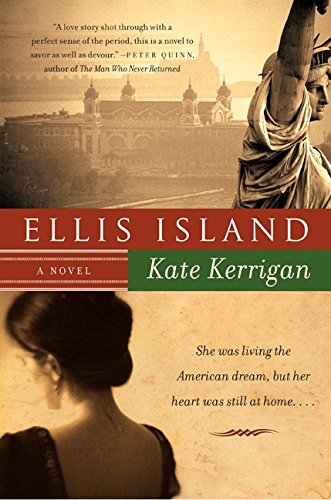 Writing a novel is always challenging. Writing historical fiction is even moreso because readers expect authors to get every detail right and transport them to another time and place, bringing history alive in a way that textbooks never can.

Author Kate Kerrigan gives it her best shot, with uneven results. Smooth and elegant writing clashes with a feeling of story crafted to fit research. The core conflict is there—a woman torn between opportunity and loyalty, self and family—but the plot could unfold anywhere. It’s more about city girl vs. country boy, passionately in love but tragically incompatible, than it is about place, though the places presented in Ellis Island are opposite enough to heighten the angst and give a classic story new life.

Ms. Kerrigan writes confidently about Ireland, from whence her family came and where she now lives. She writes less convincingly about New York City, where she has only visited (but which inspired this novel). American readers familiar with the city and its history may be able to guess which aspects Ms. Kerrigan observed personally and which she had to look up. Irish readers may find the same to be true for the County Mayo details; we’ll never know, unless people from both sides of the pond get together to compare notes. (Perhaps this is a good topic for the literary audience the book is aimed at, judging from the Reading Group Guide appended at the back.)

Regardless, the cultures and environments of both are realistically enough portrayed for the reader to identify with the main character’s adventures and trials in the 1920s, with America on the up and Ireland on the down. The most compelling sections are Ellie’s comparisons between the ways of life she experiences—especially the open doors of one place contrasted with closed doors of the other.

Here again, however, verisimilitude issues intrude. Ms. Kerrigan may have researched her setting thoroughly but missed a few details regarding period language. For instance, “ponytail” is an old word that didn’t come to describe a hairstyle in America until the 1950s. Similarly, what the narrator calls a “paperback” is a modern term for what was called “pulp fiction” or “the pulps” in the 1920s (whereas “penny dreadful,” her alternate term, was fading out or gone by then). And clichés like “the penny dropped,” as it is used in the novel, didn’t come around until the 1940s or later.

Such bloopers won’t be noticed by readers caught up in the story, but if they do, they raise the question: What else isn’t right? It’s hard to stay engaged when one must halt to confirm anachronisms that poke one in the eye, such as the expression “la, la, la”—used to convey “I’m not listening to bad news, just going my merry way”—which most often appears in contemporary material, and whose origin is unclear. Injecting it into a Roaring Twenties immigration story breaks the narrative spell.

Ultimately, in any book, story trumps setting, and here Ellis Island shines. Anyone who knows the agony of not belonging, then finds their place in the world but is obliged to either give it up or lose everything else they cherish, will breathlessly turn pages to learn how Ellie resolves this crisis. Ms. Kerrigan maintains suspense to the very end, providing a satisfying closure through a disappointing epilogue that sums things up instead of taking Ellie all the way through.

The author does something like this several times in the novel: connecting sections of intense character insight and experience with impersonal transitions highlighting the era’s characteristics that anyone could find in a U.S. encyclopedia. The book would work better if it provided fresh, little-known details or an unconventional viewpoint, or focused on fewer elements more deeply instead of spreading them out like a smorgasbord. The net effect is bouncy: deep, shallow, deep, shallow, following Ellie’s emotional rollercoaster.

This emotional journey surely reflects what thousands, if not millions, of immigrants have lived through since coming to the United States. The influx continues today, which makes Ellis Island accessible to a wide audience who will appreciate their story being told.