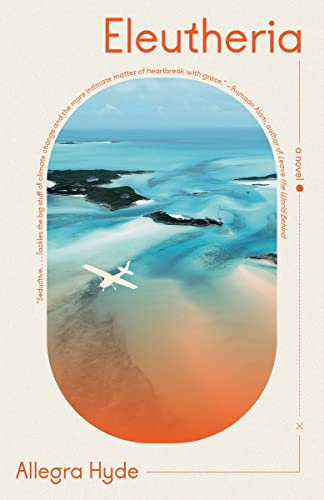 “Eleutheria . . . is a solid page-turner, made more compelling because the environmental disasters it describes may not be so fictional.

In the not-too-distant future of this novel, the Earth is awash in political and environmental disasters. “Toxic algae bloomed in Boston Harbor. Mass Mortality Events increased; one weekend, thousands of mice crawled into the streets to die; the next, ninety-three bottlenose dolphins washed up in Plymouth.” Elections are suspended in the U.S. as civil liberties are drastically curtailed.

Willa Marks, a young woman raised in a bunker by survivalist parents, is sure she’s found salvation: the secret eco-colony of Camp Hope on the Bahamian island of Eleutheria.

“Camp Hope was a prototype,” she explains. “A revolution waiting to hatch. It modeled what could be: made progress into paradise, showed how environmental living could be desired rather than feared.”

Because of her sheltered upbringing, Willa presumably hasn’t seen too many thrillers. She doesn’t know that she should be wary of a utopia run by a charismatic leader who forbids anyone but himself to have contact with the outside world, or should pay attention when a local truck driver warns her away from the eco-weirdoes.

More jaded readers may find the Big Missed Clues a bit hard to swallow. Still, Eleutheria—a word that stems from an ancient Greek term for liberty—is a solid page-turner, made more compelling because the environmental disasters it describes may not be so fictional.

After Willa’s parents die, when she’s 17, she is sent to Boston to live with her strange cousins Victoria and Jeanette, who try to scratch out a living as look-alike internet personalities. Crashing an academic party with them, Willa meets the seductive, sophisticated Harvard sociology professor Sylvia Gill.

As the physical world around her crumbles, Willa is torn between her passionate affair with Sylvia and the idealism of the Freegans, a counterculture group much like today’s collectors of the same name, who scavenge garbage bins to point out the waste and excess of Western consumer society. In Eleutheria, they are denounced as a “radical-decentralized-leftist-terrorist network.”

Then, in Sylvia’s house, Willa discovers the secret guidebook to Camp Hope.

Her uninvited arrival upsets the colony’s careful routine, including the plans for its imminent public launch. When a massive storm tears through the island, Roy Adams, the charismatic leader, disappears.

Author Allegra Hyde, an award-winning short story writer, can be wonderfully creative with her language. A headache “skewered” Willa’s temples; a willow is “a ferocious tree.”

Unfortunately, the book starts to veer off-track as it moves toward the finale. It relies too much on the device of a letter that Willa possesses throughout the book but— straining the reader’s credulity—conveniently refrains from reading until now. Meanwhile, Hyde abruptly unloads a harangue about climate change.

True, this poor planet needs all the help it can get. But a well-told story almost always works better than a lecture, as most of this novel proves.